Q&A: An Interview with Eric Strouth of Locomotive Audio

Blending Old-Style Techniques with New Technology ERIC STROUTH - I started Locomotive Audio really just as a hobby. But, after I realized I could blend several of my favorite things (audio recording, product design, and building electronics) to start a new career, I decided to quit my day job as a graphic designer and go all-in!
Blending Old-Style Techniques with New Technology 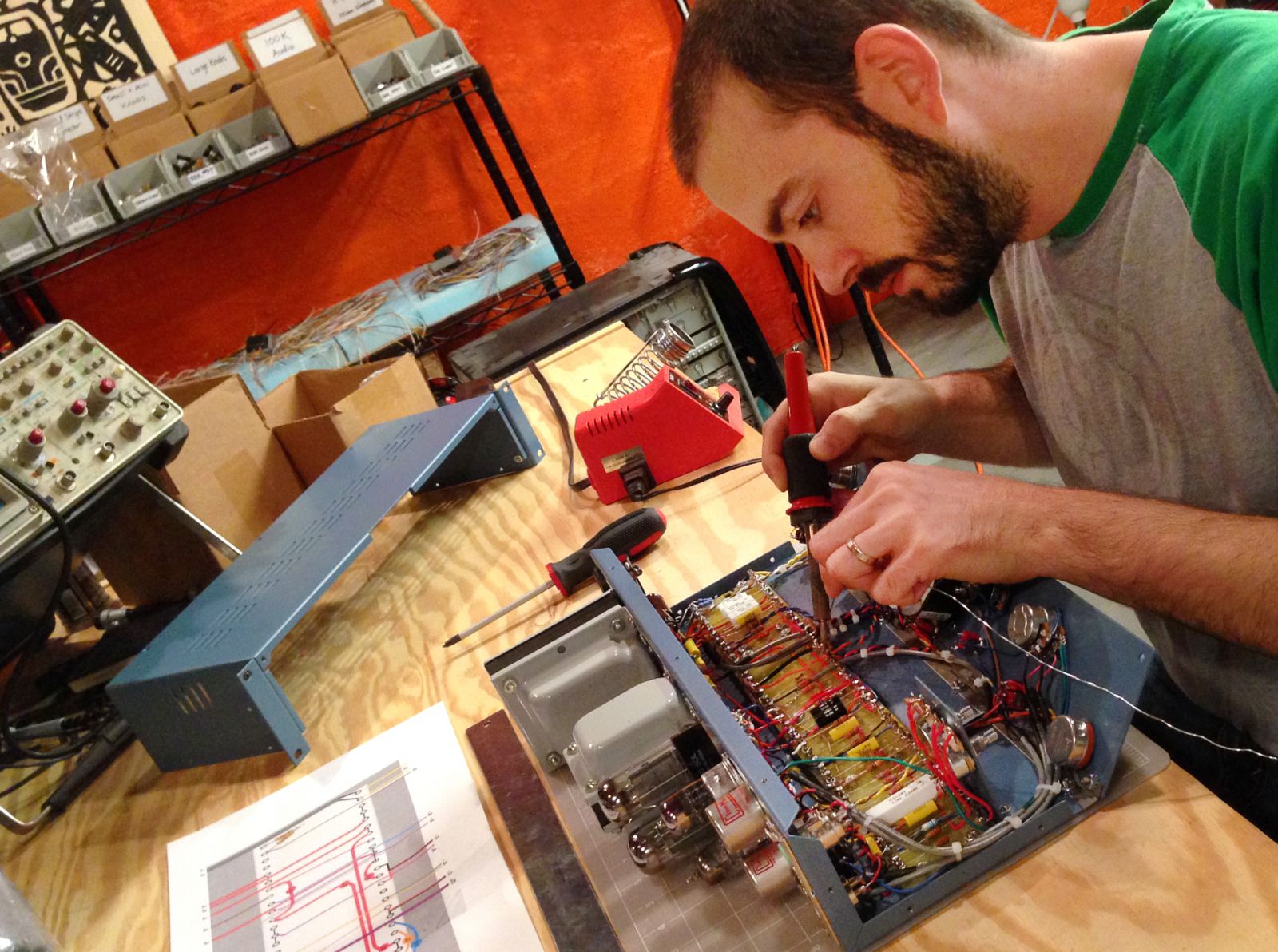 SHANNON BECKER: Tell us about your company Locomotive Audio (www.locomotiveaudio.com).

ERIC STROUTH: I started Locomotive Audio really just as a hobby. But, after I realized I could blend several of my favorite things (audio recording, product design, and building electronics) to start a new career, I decided to quit my day job as a graphic designer and go all-in!
It was a pretty stressful time, but I knew that in the end, I would be able to control my own destiny and nothing seemed more exciting than to be my own boss! I’ve already learned a lot about myself since starting the company. Learning to push myself and be excited about what I am doing daily is something I was really looking for. And for me, being able to channel several of my talents into one vision has been a real joy.

ERIC: One of the main things that excites me about manufacturing audio recording equipment is the fact that I can do it how I want! After building an LA-2A style compressor, which is hand-wired and makes use of the turret board technique, I realized that it offers such flexibility. I could change my designs at moment’s notice to fix little issues. And they are a modder’s paradise! With a circuit board, you are pretty much wed to the design after it arrives at your facility. Not to mention, turret boards are much more reliable and look so cool when loaded up with all the components! At Locomotive, we plan to use this approach for all of our products. Although the build time is much longer than it is with a standard circuit board, we feel it is a necessary component of who we are and want users to know that somebody actually sat with that piece of equipment for many hours and it became their “baby!”

SHANNON: Tell us about your company’s first product?

ERIC: We just debuted the Model 286A dual-tube microphone preamplifier and direct input (DI) and the Model 14B tube compressor. Both are built like tanks and use some pretty high-quality components.
The dual-channel 286A preamp offers a huge sonic palette for engineers and producers to explore. Its single-ended Class-A tube signal path is what makes this preamplifier special. The 286A features two tubes per channel—one EF806 and one 12AY7. The 286A can play nice by acting clean and natural with gentle even-order harmonics for a smooth, sweet touch. Or, you can get more aggressive with the “Gain” knob and drive the first 12AY7 stage for a warm and colored thickening effect. You can also go all-out and slam the final 12AY7 stage and output transformer through the “Level” knob for a fully-driven, saturated tube amp sound! Clean and natural to overdriven and fuzzy warm, it’s your choice!

Our single-channel 14B compressor and limiter is based on a very old, but still exciting concept of rebiasing the input tube with a side-chain control voltage. The 14B mixes ideas based on a few of our favorite compressors such as the UA 176, the Gates Sta-Level, and the Collins 26U. Its modern features allow it to achieve a unique sound in its own right. Starting with the semi-remote cutoff 6BC8 tube, a 12AY7 then drives two powerful push-pull 6V6 output tubes. The 14B is quite a versatile unit, with the ability to run soft and gentle or hard and aggressive. The side-chain low cut control offers even more flexibility, especially when used on the mixbus and linked with another 14B. This unit can be used with all kinds of source material including vocals, drums, guitars, bass, piano, and horns. You will notice an enhancement on any material run through this unit, even when not compressing.
SHANNON: Were there any challenges involved with the product design?

ERIC: The main hurdle was designing a chassis that could easily accommodate the turret board approach and wouldn’t hinder the build process, such as soldering the wires from the turret board to the components that are already loaded on the chassis. Having a graphic design background and being very technically minded with measurements and fabrication, I designed the chassis in Adobe Illustrator and exported my drawings to an AutoCad format for the metal fabricators to use. I got pretty close, but of course when you are dealing with several pieces of metal, each with their own tolerance, holes that should match up will need to be bumped around a bit. So after a couple iterations of the prototype, we got it right! I couldn’t be happier with the overall look and efficiency the chassis gives the build.

SHANNON: Why did you choose the Kickstarter route to fund it?

ERIC: My wife Jeni had mentioned it, and at first I dismissed the idea because I thought Kickstarter was only for little projects like, “help me fund a CD” or “give me some money for a short film.” But after taking a look and seeing some pretty amazing high-dollar campaigns, I realized she was right. I figured people would feel safer going there and giving a complete stranger their hard-earned money than just pushing a PayPal button on my website.

SHANNON: Was this your first Kickstarter experience?

ERIC: Yes, and overall, I would say it was great! I did learn that Kickstarter, in general, does much better for lower-priced items that are more accessible to the general population of people. For instance, a $500 3-D printer on Kickstarter is much more exciting to a lot of people than a $2,000 audio compressor. So most, if not, all of the “backers” came from my own advertising on audio forums and Facebook. If anything, as I said before, the credibility of Kickstarter is what may have made some people decide to actually put up their money.
SHANNON: Would you recommend Kickstarter to other entrepreneurs?

ERIC: Absolutely! I would definitely recommend it as a great way to get your product quickly seen by many people. Your product has to be just right for it, but the upside is that things are pretty well organized and the funds are direct deposited into your checking account. So, it is a pretty streamlined process. Some things to keep in mind are that Kickstarter takes 5% and the actual payment processor, Amazon, takes 3–5%. So, the creator needs to build that into the price. The way I see it though, is that the exposure is worth the fees and without Kickstarter, the creator may not see any sales!

SHANNON: Has your product started shipping? What kind of response has it received from your backers?

ERIC: Yes, in fact, we recently sent our first package containing two 14B compressors to Sweden! I’ve also sent a demo unit to a local St. Louis studio (Firebrand Recording), which was very well received. Firebrand Recording will be getting its own unit this week!

SHANNON: How long have you been designing audio electronics? When did you become interested?

ERIC: I have been tinkering since I was a child, but really designing for about four years now. As with most people from my generation, I started “in the box” and got fed up with using a computer screen and mouse to control my audio recordings. I hated the fact that I couldn’t fit everything on my screen and that I couldn’t just grab the damn knob with my fingers and turn it! After a trip to Memphis, TN, and seeing all the beautiful old analog equipment in Sun Studio, I was hooked. I came home and purchased a reel-to-reel tape recorder and started learning. I became a little obsessed actually! And here I am, designing old-school tube equipment. Although I use a tape recorder instead of a DAW now, I honestly think a hybrid approach with new and old technology is the way to go.

SHANNON: What’s next for Locomotive Audio?

ERIC: Well, the most exciting news for us is that we are attending the Audio Engineering Society (AES) International Convention (October 9–12)! We hope to make some pretty awesome connections and sell a few pieces of gear! I’m so excited!

SHANNON: Do you have any advice for audioXpress readers who are thinking of building their own sound systems?

ERIC: Although the high voltages can be very dangerous and a little soldering experience is a must, I would definitely recommend doing a project like an LA-2A clone. Powering up a high-quality piece of equipment is very gratifying after soldering that last wire!
related items