Looking for a circuit solution to the problem of measuring AC voltage and current using DC meters? Synchronous rectification solves a pesky problem caused by diodes.

A couple of years ago I built an isolation transformer with a variable autotransformer, or Variac, so that I could work safely on hot-chassis equipment. I also use it on my regular projects because the Variac allows me to power them up slowly so I can check voltages and find shorts before something blows up. I hate being surprised by a puff of smoke or a burned finger.

The idea for this project came from Electronics Now magazine (December 1997, p. 18), which suggested using two identical high-voltage transformers hooked up secondary-to-secondary. I found two huge surplus 380-V 500VA transformers. At 120 V they could supply 4 A of current, which was perfect.

The Variac I used was a 3A model connected to the primary output of the second transformer. I also used two DC milliammeters to measure the Variac output voltage and the current flow of any device I plugged into it. All this I installed in a large aluminum box along with a small fan, an on-off switch, a fuse, an outlet socket, and other miscellaneous requirements.

The metering circuit (see Figure 1) gave me some problems. Since the meters were DC, I used diodes to half-wave rectify the voltages so they would work properly. The problem is that PN junction diodes such as these are nonlinear devices. The diode resistance is not constant, but varies with the amount of current passing through it. If I doubled the voltage of the Variac or the load current, the meters would not show a corresponding linear increase. I could easily have re-marked the meter faces to reflect this, but I am an idealist. 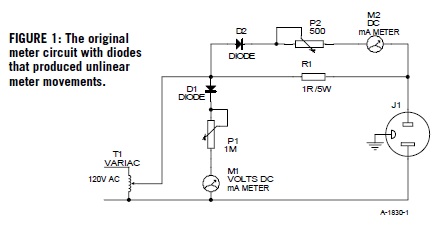 I then tried using Schottky diodes because they work on a different electrical principle than the PN junction types. These worked better in the circuit, but still were not good enough. Germaniums that I tried were also unlinear. What I desired was the perfect diode, a linear device that would let me accurately measure AC with a DC meter, no matter what the level.

One way to measure AC current only is to use a current transformer with the primary winding in series with the main line and the secondary winding connected to a diode rectifier and DC meter. This method works by converting the current to a proportional voltage and then stepping it up so the diode works in its linear region. A toroid transformer would be perfect for this, but would require me to wind my own, so I chose not to go that route. If you would like more information (see Eric Lowdon’s work), which contains an excellent chapter on current transformers, with all the details.

A simpler way to solve my dilemma of measuring AC voltage and current with DC meters is with a synchronous rectifier using a power MOSFET transistor and a 12-V transformer (see my article, “Try Synchronous Rectification,” AE 5/00, p. 26). It makes the perfect nondiode diode rectifier. One of the beauties of a MOSFET is that it does not have a PN junction voltage drop like a bipolar junction transistor. Its voltage drop acts more like that across a standard resistor—an IR voltage drop. Actually, it is exactly like a resistor, albeit a silicon one, and resistors, we know, are for the most part linear devices. It is this characteristic that I wished to take advantage of.

Figure 2 shows the synchronous rectifier circuit in a half-wave configuration. The basic circuit uses a small 12.6-V AC 300mA single secondary transformer and two IRF510 n-channel MOSFETs. The peak unloaded voltage of this auxiliary transformer was about 23 V, information that is important because the MOSFET gate with respect to source bias, for saturation, must be greater than 10V peak but less than 20-V peak to prevent transistor destruction. 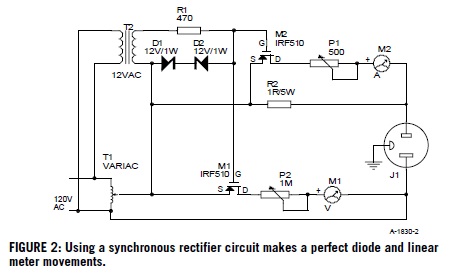 In other words, when the source goes positive, the gate must go more positive by the aforementioned amount, but not any more than that. Since the gate voltage was over the allowable, I incorporated as a limiter two 12-V, 1-W Zener diodes (1N4742A) connected in a cathode-to-cathode connection and a 470-Ω, 0.5-W dropping resistor. The secondary of this transformer, you will notice, is connected to the wiper of the Variac. The phasing is such that the gates of the transistors are always switching at the line rate, regardless of where the wiper is set. If the wiper is just off 0V, for example, the transistors are ready to rectify the voltage for each of the meters.

Each meter has its own transistor. I tried a single transistor for both, but for some reason I have not yet fathomed the current meter would pin the needle when the Variac was set to a certain point. Apparently there was an unexpected voltage-divider-path problem between the 1-Ω shunt resistor and the 0.5-Ω MOSFET on-resistance that fortunately was cured by using dedicated transistors for each meter.

The Zener diode circuit across the auxiliary transformer’s secondary also helps protect the gates from power-line high-voltage spikes and transients that could destroy them. I also installed a 200-V metal oxide varistor (MOV) across the primary of the transformer for some added safety. All the parts used, the 12-V transformer, MOSFETs, Zeners, resistor, and MOV can be found at your local parts store. Finally, no heatsinking is required for the transistors, since they do not draw any appreciable current.

Now my problem is solved. When I increase the Variac voltage or when the load draws more current, the meters read in a linear and predictable fashion. Using synchronous rectification in this manner solved an annoying measurement problem. It allowed me to use DC meters to measure AC without the bad side effects caused by the nonlinear nature of diodes.