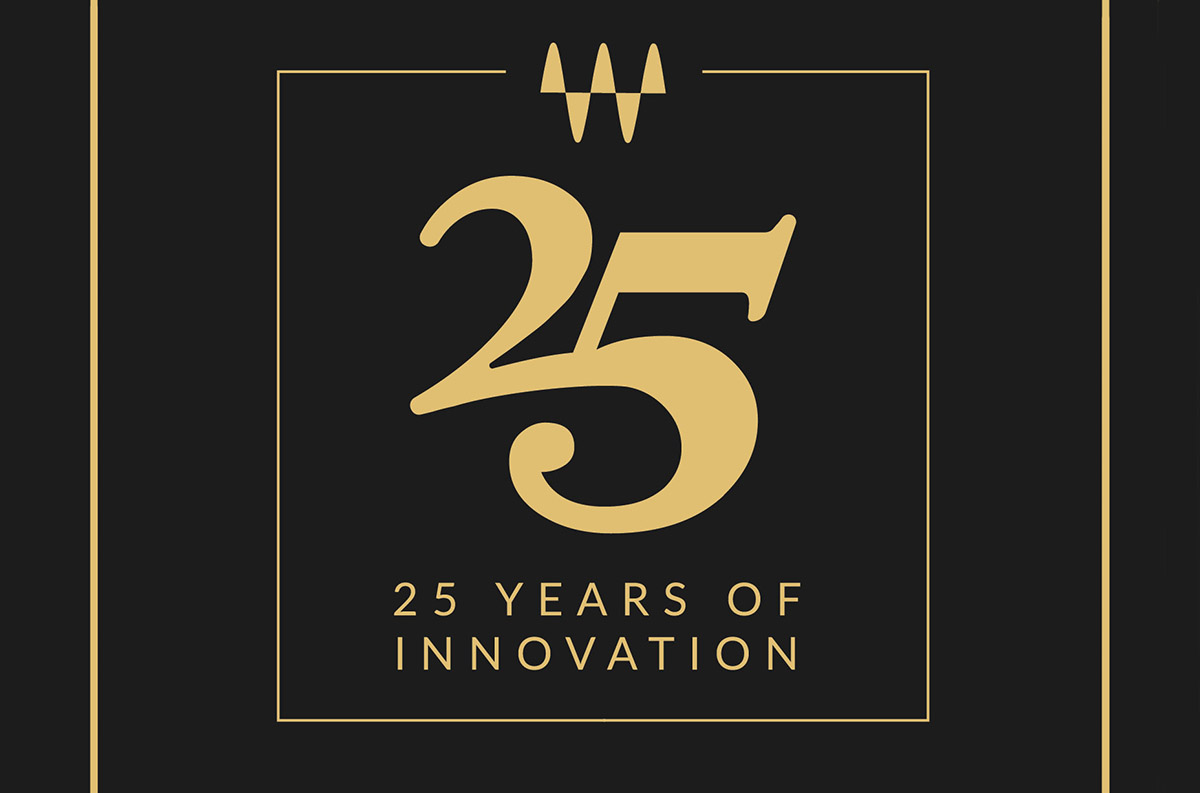 Twenty-five years ago, Waves introduced the world’s first audio plug-in, the Q10 Paragraphic Equalizer. With its introduction, Waves not only transformed the way we work in the recording studio, it also created an entirely new industry sector: software-based audio signal processing. The Q10 revolutionized the professional audio industry, transforming the way we work with audio and giving the computer a new status in music recording. For the first time, it offered high-end professional sound quality in the box that was on par with the sound provided by hardware gear.

What was then considered a surprising foray into computer-driven sound processing tools has since become a prevalent industry standard. Waves tools are now being used to improve sound quality in virtually every sector of the audio market, from recording, mixing, mastering and post-production, to broadcast, live sound, and consumer electronics – hence Waves’ motto, “Where there’s sound – there’s Waves.” For its accomplishments, Waves received a Technical GRAMMY Award in 2011.

Propelled by an increasingly diverse and comprehensive product line, Waves quickly became a favorite of audio engineers and producers worldwide. Waves has gone on to develop a comprehensive line of over 200 audio plug-ins, an impressive line of diverse hardware units, and an expanding line of state-of-the-art virtual instruments.

Over the past 25 years many revolutionary Waves plugins have become industry standards. Game-changing tools by Waves have included the L1 and L2 Ultramaximizers, which changed the way level maximization and peak limiting are handled by mixing and mastering engineers today; and Waves’ groundbreaking modeling of classic studio legacy hardware, which delivered to any audio engineer or home producer the sound of the SSL and API consoles as well as original rare gear from Abbey Road Studios.

Other early breakthroughs have included valuable time-saving tools like Vocal Rider and Bass Rider; pioneering early effect plugins such as the MondoMod, SuperTap, MetaFlanger; and crucial workflow processors like the S1 Stereo Imager (the first ever stereo manipulation processor) and the PS22 Stereo Maker (a pioneering mono-to-stereo converter).

Waves also spearheaded and remains a leader in noise reduction plug-ins dedicated to audio repair. It is hard to imagine the past two-and-a-half decades’ effort to remaster classic recordings from timeworn magnetic tape and old vinyl to digital formats without the advent of Waves’ audio restoration tools – a shining example being Disney’s old optical media, long considered lost or extremely costly to resuscitate, which were restored using Waves tools.

Of special note in Waves’ history of audio innovation are the unique Waves Signature Series plug-ins, created in collaboration with the world's top producers and engineers. These precision-crafted plug-ins capture each artist's distinctive sound and production style, using customized processing chains designed by the artists themselves, and delivering them to the end user in the form of extremely easy-to-use plug-ins.

In recent years Waves has also become an established, major player in the live sound market. Live mixing engineers can now bring studio sound to the stage and mix live sound with an unprecedented level of intricacy, by mixing their shows with Waves (and third-party) plug-ins, with all the wealth of precision control they offer. They can do this thanks to two groundbreaking software innovations by Waves: the Waves MultiRack plugin host, which lets live engineers run plugins on any live sound console; and the Waves eMotion LV1 live software mixer, which enjoys success among FOH, monitor and broadcast engineers in need a highly portable live digital mixing console providing pristine, studio-quality sound.

Most notably, Waves’ groundbreaking SoundGrid technology and applications have become an industry standard for real-time, low-latency audio processing and efficient, cost-effective audio networking. SoundGrid has entirely changed the workflow possibilities for both audio engineers and musicians: with SoundGrid, they can now run higher plugin counts than ever by offloading all plugin processing to external servers and freeing up their computers’ CPU; record with plugins in real time, allowing them to hear the true sound of the recording already during the performance; and network all audio in their studio in the most efficient way possible.

Waves’ most recent innovations have established Waves as a major player in the 360-degree, 3D and VR audio market. Waves recently introduced the Nx Virtual Mix Room plug-in, a virtual monitoring tool that delivers, on headphones, the same three-dimensional depth and panoramic stereo image one would be hearing from speakers in an acoustically treated room. Together with its companion Nx Head Tracker, Nx helps audio engineers better predict how their headphone mixes will translate to speakers, finally turning headphones into a mixing tool they can trust. Waves Nx is also available as a consumer application that delivers a 3D audio experience on any set of headphones, turning them into a high-end 360° surround sound system and enabling consumers to experience movies, music and games with real-world 3D sound. Waves Nx technology is also now used in VR games such as Racket:Nx.

Used in scores of commercial and personal recording studios and by hundreds of thousands of users worldwide, the Waves sound can be heard in the world’s most popular hit recordings, major motion pictures, hit television shows and popular video games. Waves’ strong reputation for outstanding quality and technical leadership make it not only the acknowledged market leader in professional audio software, but also the preeminent provider of intelligent audio in consumer electronics.

Celebrating its 25th Anniversary, Waves is now shipping revamped and reskinned versions of three of its classic plug-ins: the Q10 Equalizer, the AudioTrack channel strip plug-in, and the L1 Ultramaximizer level maximizer/peak limiter. These revamped 25th Anniversary editions include new plu-gin features, as well as a choice between two graphic user interfaces – the classic ‘Legacy’ interface, and the new ‘Modern’ interface created especially for the 25th Anniversary celebrations. 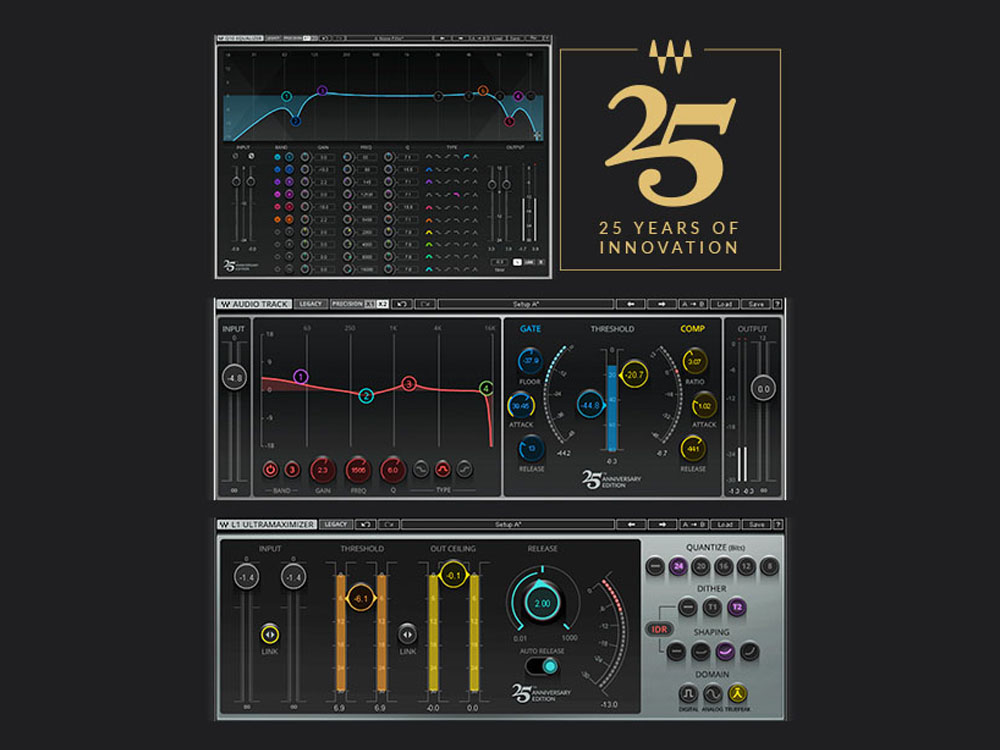 Q10 Equalizer
The first plug-in by Waves, the Q10, is a multiband paragraphic EQ with up to 10 bands of precision equalization for mixing and mastering. It is a go-to tool for both surgical repair and gentle coloring. With ten bands, each band offers six different filter types and complete control of gain, frequency and Q. And unlike most multiband equalizers, each Q10 band can use any filter type, so there is immense flexibility when shaping a signal. The Q10 offers extremely large Q values and large boosts and cuts, so you can fix and focus sounds that a conventional EQ could not touch. It is configurable as either two independent mono equalizers or as a precisely ganged stereo equalizer.

AudioTrack
CPU-light with pristine sound quality and serving the needs of a full channel strip within a single interface, Audio Track offers an efficient way to mix tracks. It includes three processors – EQ, compression and gating – in one easy-to-use plug-in, and functions like a mixing console’s channel strip, serving the most essential needs on any audio track. Users can open multiple instances, one per channel, and avoid the need to jump back and forth between separate equalizer, gate and compressor plug-ins.

L1 Ultramaximizer
A must-have plug-in for mastering, the L1 is the first software unit to offer a brick wall limiter. With only two major controls, quick and simple to use, the L1 is an advanced-level maximizer, look-ahead peak limiter and high-resolution re-quantizer – a powerful industry-standard all-in-one plugin for mastering and mixing. Renowned for its transparency and punch, the L1 has been the standard tool used on countless hit recordings over the past couple of decades.