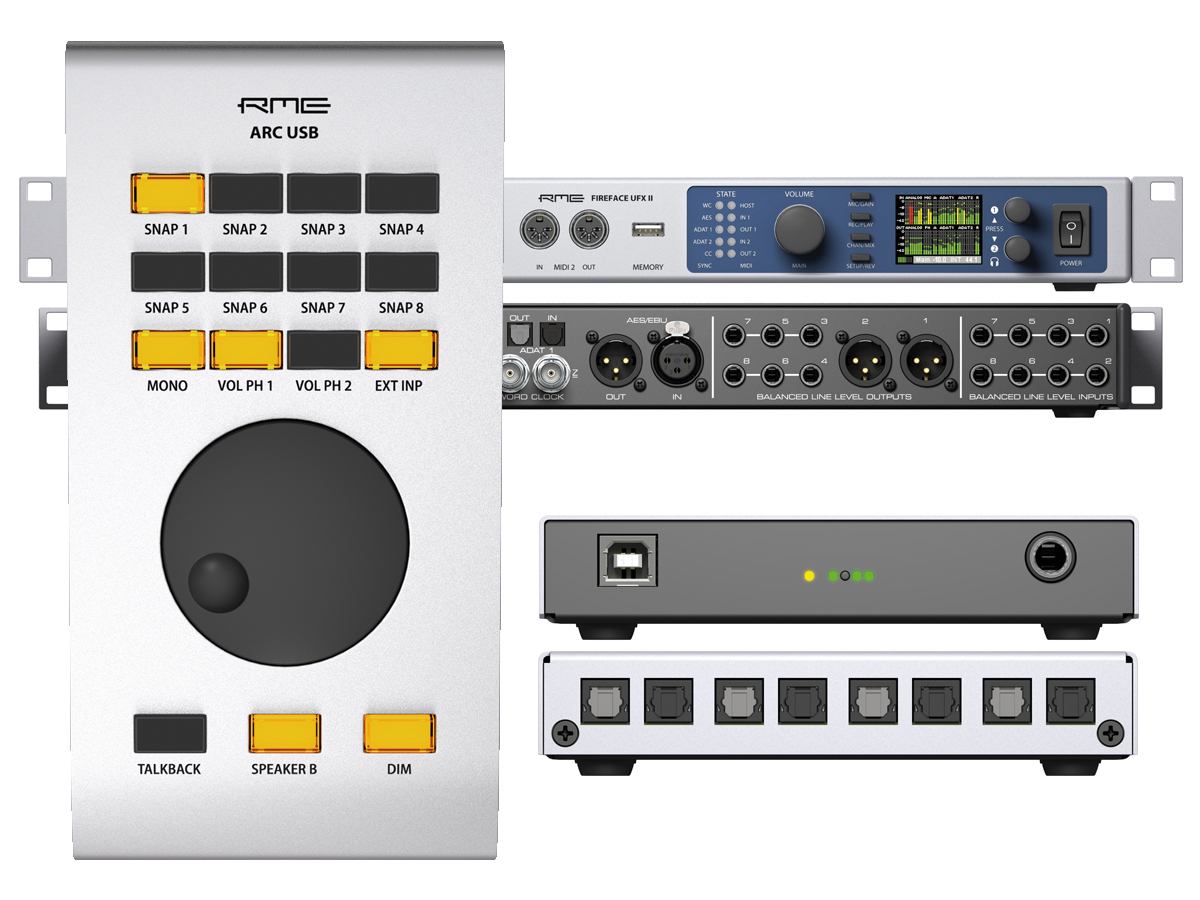 Among the many new interfaces introduced at the recent NAMM 2017 show, in Anaheim, CA, the new RME Fireface UFX II audio production interface is probably one of the most versatile, affordable and compatible units. Now with the inclusion of DURec (Direct USB Recording), and RME's low latency hardware and driver designs, the Fireface UFX II delivers a rich feature set that will appeal to users in both high end home studios and commercial audio production facilities.

With capacity for 60 audio channels (30 input and 30 output), support for sampling frequencies upward of 192 kHz, and the flexibility provided by standard USB connectivity, the new Fireface UFX II is an ideal solution to a wide range of recording, mixing, and monitoring applications.

The Fireface UFX II offers excellent flexibility that enables the interface to fit seamlessly into a myriad of production environments. Analog, ADAT, AES, SPDIF, and USB 2 are all standard on the Fireface UFX II. Equally impressive is the unit's channel count: 12 analog, 16 ADAT, and 2 AES for 30 channels input and 30 channels output. Further, with support for USB 2 connectivity, the new Fireface UFX II can integrate with RME's optional ARC USB remote controller.

The Fireface UFX II also includes DURec (Direct USB Recording), which is available on the front of the interface. It now offers second generation hardware with improved USB functionality and compatibility - providing greater reliability, even with slower or multi-partitioned USB thumb drives. The RME Fireface UFX II Interface is slated to be available in Q1 2017.

RME ARC USB
The new RME ARC USB Advanced Remote Control complements the recently introduced Fireface UFX+ audio interface and the company's acclaimed TotalMix FX routing and mixing software. The ARC USB also works with any RME audio interface that is currently compatible to the latest drivers supporting TotalMix FX, and this includes interfaces that were released as far back as 2001. With an abundance of useful features, this Advanced Remote Control (ARC) offers intuitive control over the interface's DSP-based routing and effects section. 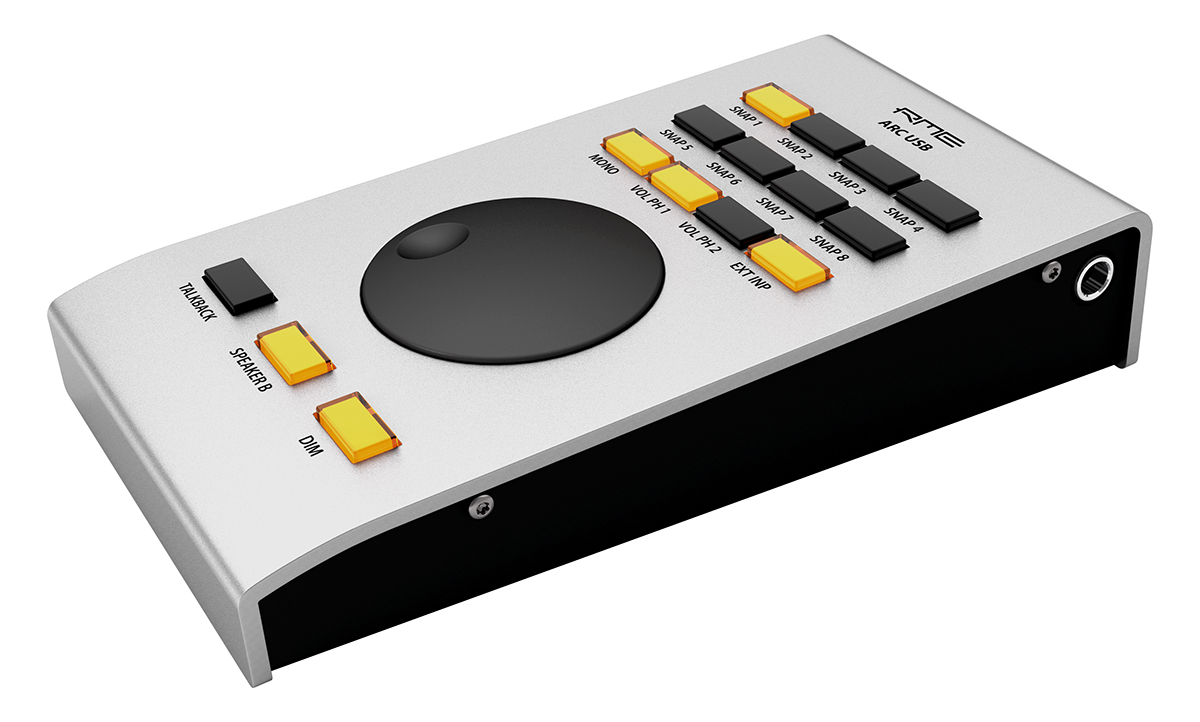 Operating as a UAC 1 class device, the new ARC USB is natively compatible to Windows and Mac OS X and can be connected via USB to any computer. As soon as the ARC USB is present in the operating system, TotaIMix FX will automatically detect and communicate with the controller. By being a remote for TotalMix FX, any hardware that uses TotalMix FX can be controlled - from a PCI based Multiface up to the latest Fireface UFX+. The latter includes direct connectivity for both online and stand-alone operation.

The unit features a jog wheel, 15 freely assignable, illuminated buttons, as well as a TS (Tip / Sleeve) connector for a foot switch that can be assigned individually. The RME ARC USB can also control multiple units simultaneously.

"The ARC USB is an incredibly well thought-out controller that enables musicians and audio engineers to maximize the capabilities of their Fireface UFX+ audio interface and the TotalMix FX software. With its jog wheel and assignable buttons, this versatile controller provides a tremendous amount of functionality that helps streamline workflow. Given the ARC USB's backwards compatibility with RME interfaces that were released as far back as 2001, this is yet another example of RME's long-term commitment to its customers," says Christian Latzelsberger, Vice President of Sales at Audio AG. 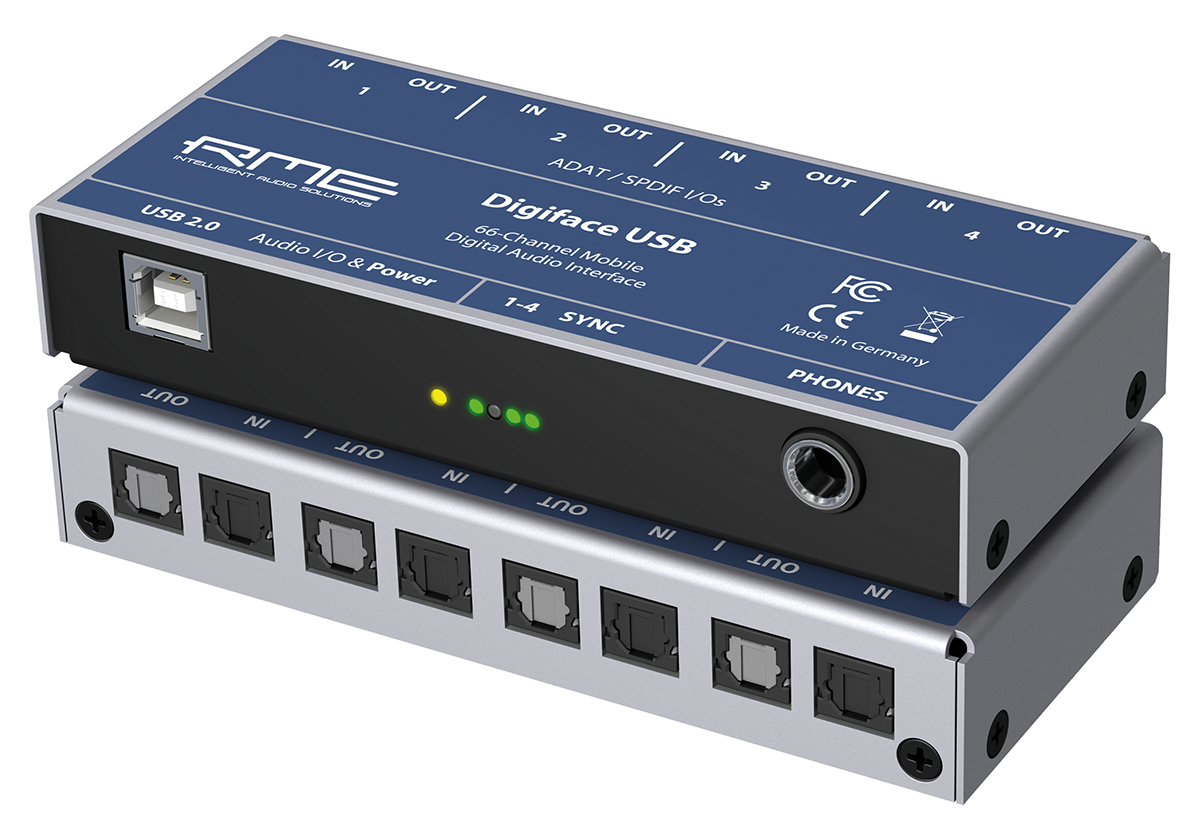 The Digiface USB is an extremely compact & portable digital audio interface with 4 optical ADAT / SPDIF I/Os, and an analog high-quality line/phones output via 6.3 mm TRS jack. Continuing the legacy of RME's famous HDSP Digiface, a triple ADAT I/O interface with phones and PCI interface, Digiface USB simplifies connection with USB 2, does not need an external power supply, and even adds another optical I/O, resulting in 32 channels input and output each when using ADAT optical.

The analog output hosts channels 33/34, and can be used freely thanks to TotalMix FX, RME's routing and monitoring solution. Each single optical port can use either ADAT (up to 8 channels) or SPDIF (stereo). While the inputs adapt automatically to the received signal format, the outputs can be individually switched between ADAT and SPDIF operation. Supported are SMUX and SMUX4. Therefore at 192 kHz either 8 channels via 4 x SPDIF or ADAT are
possible on both inputs and outputs. Its small size, weight and bus-powered operation make the Digiface USB extremely versatile and useful. It could even serve as simple headphone amp for mobile use.
www.rme-audio.de | www.audioag.com
related items