Messe Frankfurt published the following update: Prolight+Sound will not be held in 2020. On 12 March, the Hessian Ministry for Social Affairs and Integration issued general decrees prohibiting large-scale events expected to attract more than 1,000 visitors. At the present time, it cannot be assumed that the current situation will have changed by the time the postponed event was to have been held. Therefore, Messe Frankfurt has decided to cancel the event.

It was not possible to hold Prolight+Sound 2020 on the dates originally planned in view of the restrictions introduced against the background of the rapid spread of SARS CoV-2 infections.

“We did everything we could to hold Prolight+Sound 2020 as soon as possible after the original dates and would like to extend our thanks to the response and support from numerous companies and organisations that said they wanted to join forces with us to do so. We are very sorry to have to cancel the fair. However, we firmly believe that, under the current circumstances, this is unavoidable”, says Detlef Braun, Member of the Executive Board of Messe Frankfurt GmbH. 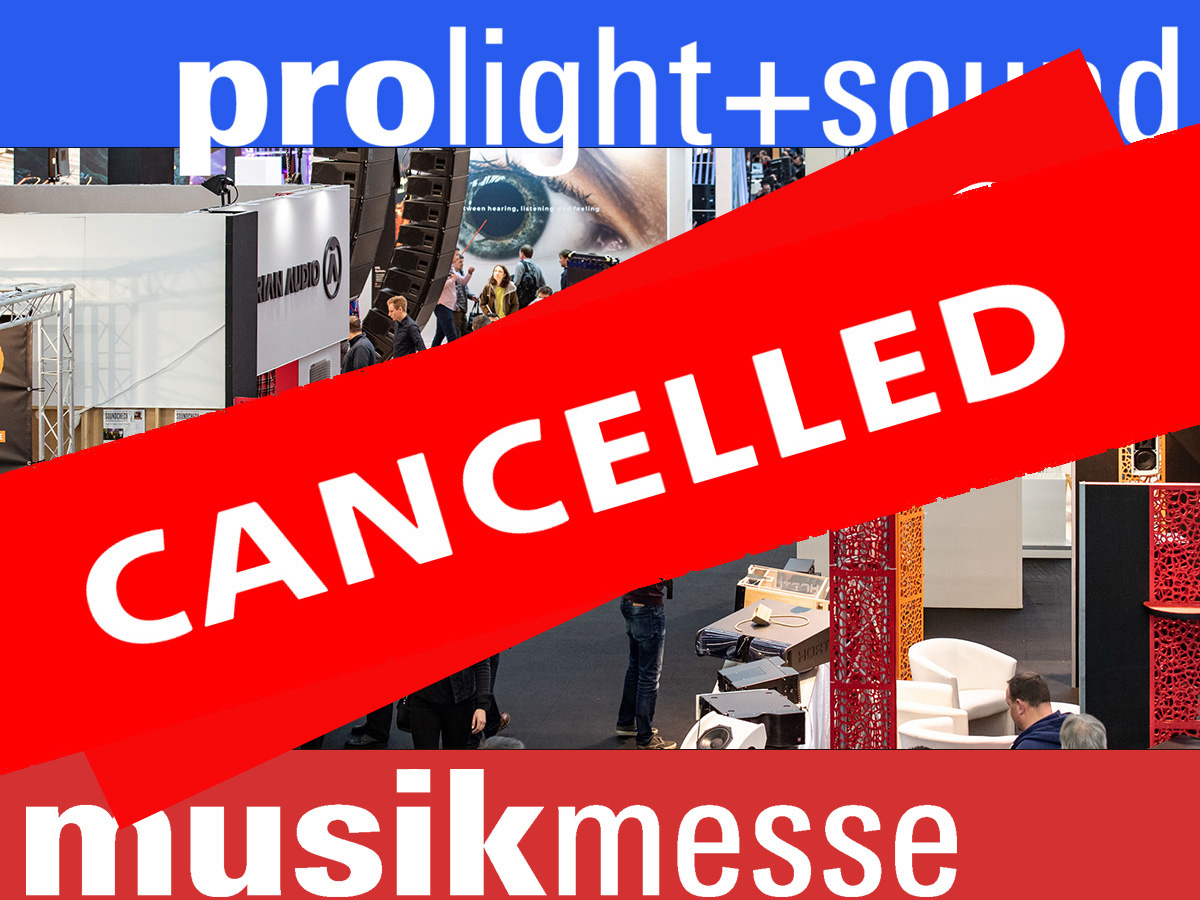 For the last 25 years, Prolight+Sound has been synonymous with trends and innovations in the entertainment-technology industry. The next edition from March 31 to April 3, will take place in the western section of the renovated Frankfurt Fair and Exhibition Centre. More than ever before, the focus of Prolight+Sound will be on professional networking, business and education. audioXpress and Voice Coil will attend.

In 2019, the world of entertainment technology and music business joined once again at Prolight+Sound and Musikmesse in Frankfurt am Main. With a revised hall layout, Messe Frankfurt responded to all important demands from exhibitors and visitors by locating the entire ‘Audio, Sound + Recording’ product segment in Hall 8.0, the biggest ground-level exhibition hall at the constantly expanding Frankfurt Fair and Exhibition Centre.

In result, the pro audio section of Prolight+Sound was once again a vibrant trade-show, even if with lots of empty spaces and "fill-in" themed areas that fooled no one. At the end of the show, the feeling was mixed. Some exhibitors were extremely happy with the visitors’ quality and the business they made. Others, said they would not return. 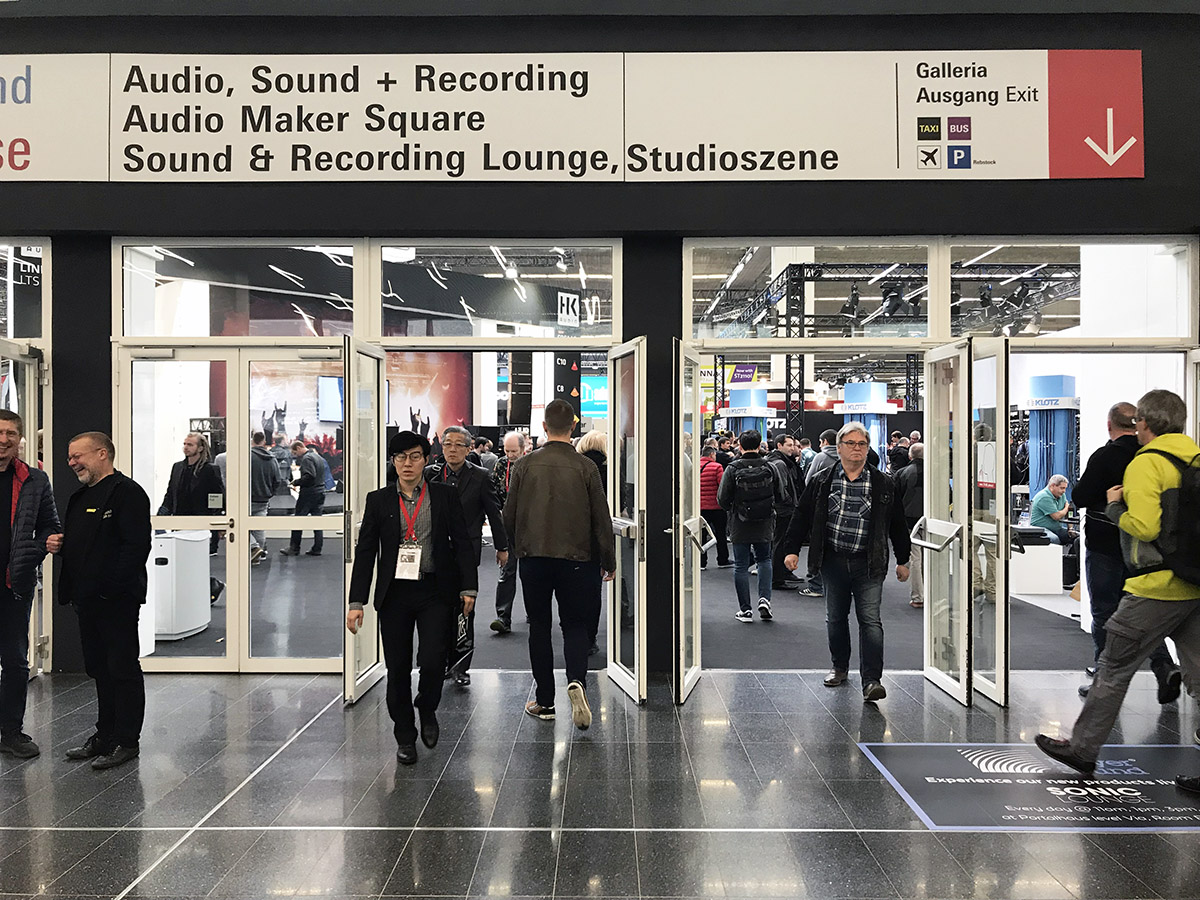 On the completely new Hall 12, where the world of show lighting and stage technology was located, the feeling was completely different. It was "party like it's 1999" and most of the exhibitors probably never even noticed that there was something happening at the other 11 halls of the gigantic Messe Frankfurt complex. Most probably, that area of Prolight+Sound will continue to expand. Just a pity that the two “lighting” and “sound” areas weren't closely located to each other…

For 2020, Prolight+Sound celebrates 25 years, and audioXpress and Voice Coil will be there again, because it is the show where we can meet with almost all the important driver companies from Italy, Germany, France, UK, Spain, Eastern countries and even some from the US. Visitors can also meet with some of the largest pro audio companies in the best possible conditions, and even listen to all the latest PA systems actually playing in the Live Sound Arena outdoors (when it's not raining).

Otherwise, at the other extreme of the Messe complex, there is still a show called Musikmesse, which is now a sort of musical festival starting on Wednesday and extending to Saturday. But in place of the vibrant trade-show where retailers from all over the world would arrive excited to try the latest gear and place orders, there are now lots of curtains, empty carpets and the weird silence of an art gallery. 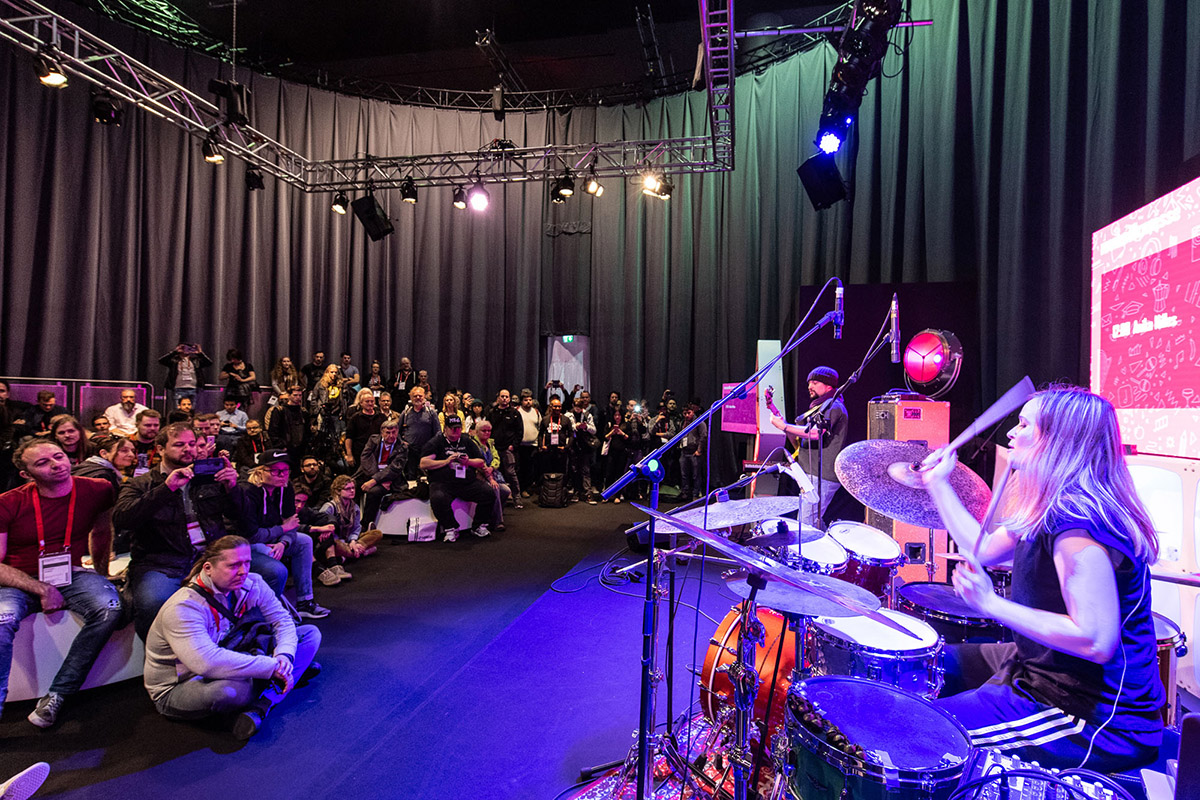 According to Frankfurt Messe, the 2020 edition of Prolight+Sound will offer new trade-visitor services, an even bigger gamut of conferences, more demonstration rooms for elaborate product presentations and there is a Hosted Buyer program: Messe Frankfurt will bear flight and hotel costs for a limited number of new top buyers, which are selected in cooperation with key-account exhibitors.

Prolight+Sound also announced a cooperation with the International Association for Suppliers of Broadcast and Media Technology (IABM), which will be supporting the education program with a lecture series on innovative AV and radio applications. Some of the key areas of the content will include IP-based broadcasting technologies, interoperability between AV devices, the ever more complex landscape of competing standards and specifications, as well as general trends in media technology.

“Our promise for Prolight+Sound 2020 is unequivocal: we will bring companies together with top decision makers from the industry, increase visitor quality and help continuously generate new, high-grade leads. The event has set a clear course towards the future and creates new incentives for buyers and planners to come to Frankfurt”, says Michael Biwer, Group Show Director of the ‘Entertainment, Media & Creative Industries’ Business Unit of Messe Frankfurt Exhibition GmbH. 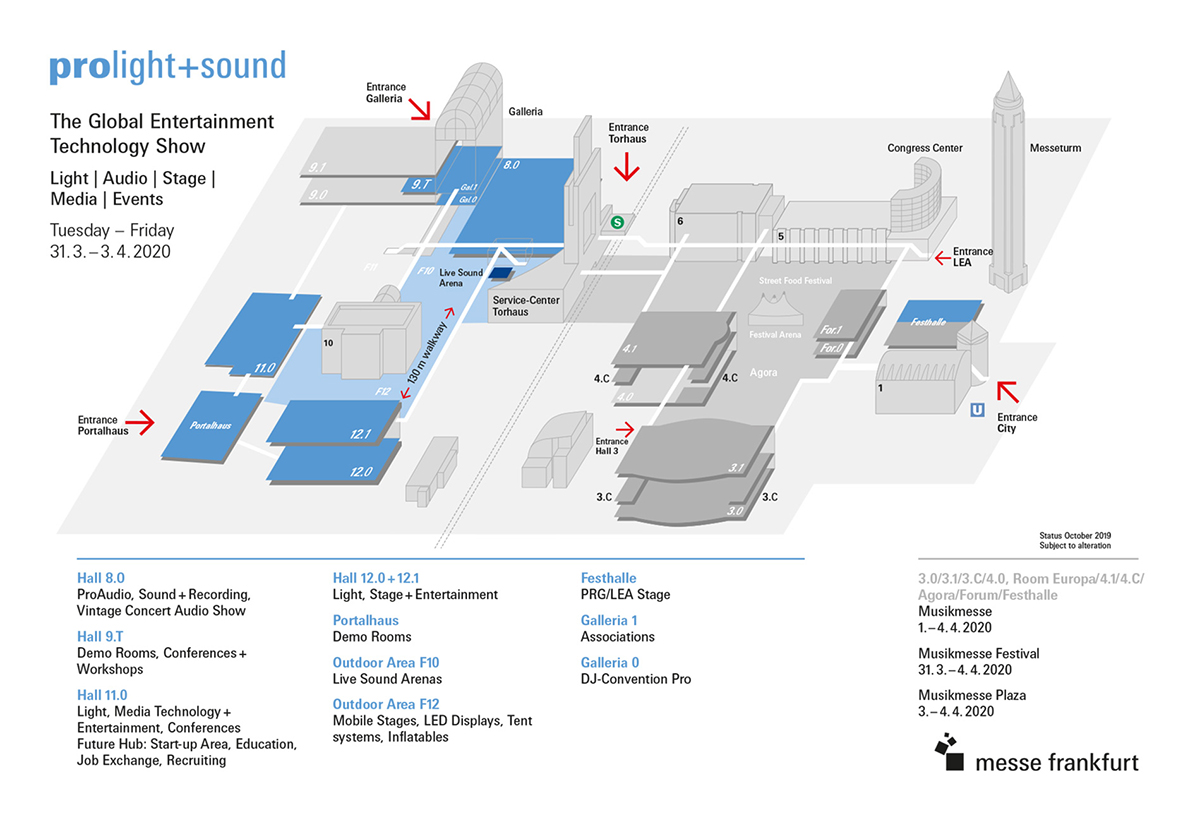 Prolight+Sound is split into five main sections: ProAudio, ProLight, ProStage, ProMedia and ProEvent. ProAudio is in Hall 8.0. Several companies will also be demonstrating their PA systems under realistic conditions at the Live Sound Arena on the outdoor exhibition area. Additionally, there will be demonstration rooms with the focus on immersive sound applications. The new Centre Stage offers an opportunity for companies to present future-oriented solutions in the audio field. On top of that, experts will pass on their specialist knowledge on interdisciplinary themes, such as green events, talent development and the legal frameworks. The Audio Makers Square is a special area for the international DIY community.

ProLight is located in Hall 12.1, the upper floor of the biggest and most modern exhibition hall at Frankfurt Fair and Exhibition Centre, next to ProStage, located in Hall 12.0. ProMedia and ProEvent will relocate to Hall 11.0 in the western section of the Exhibition Centre, closer to the other Prolight+Sound product segments, and there will be a special exhibition area for manufacturers of safety and security solutions. 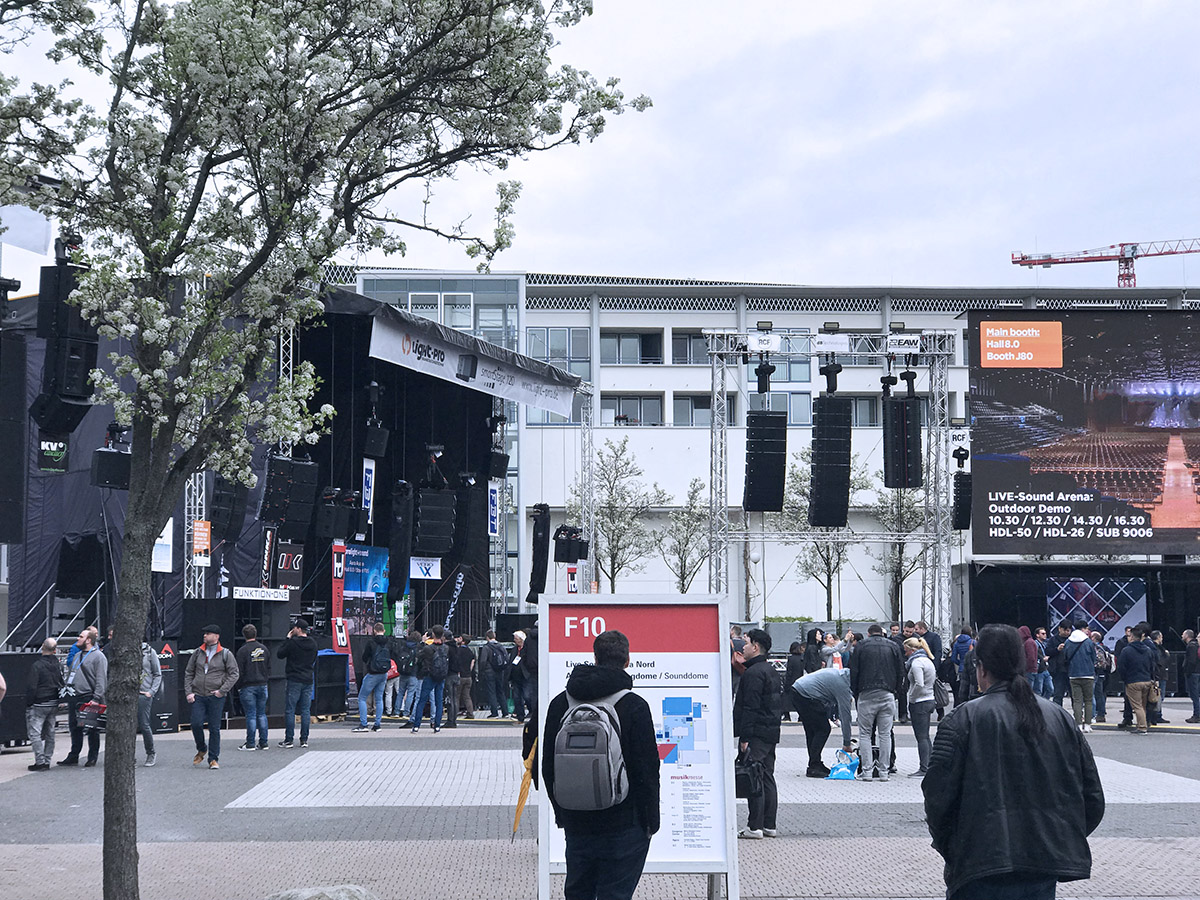