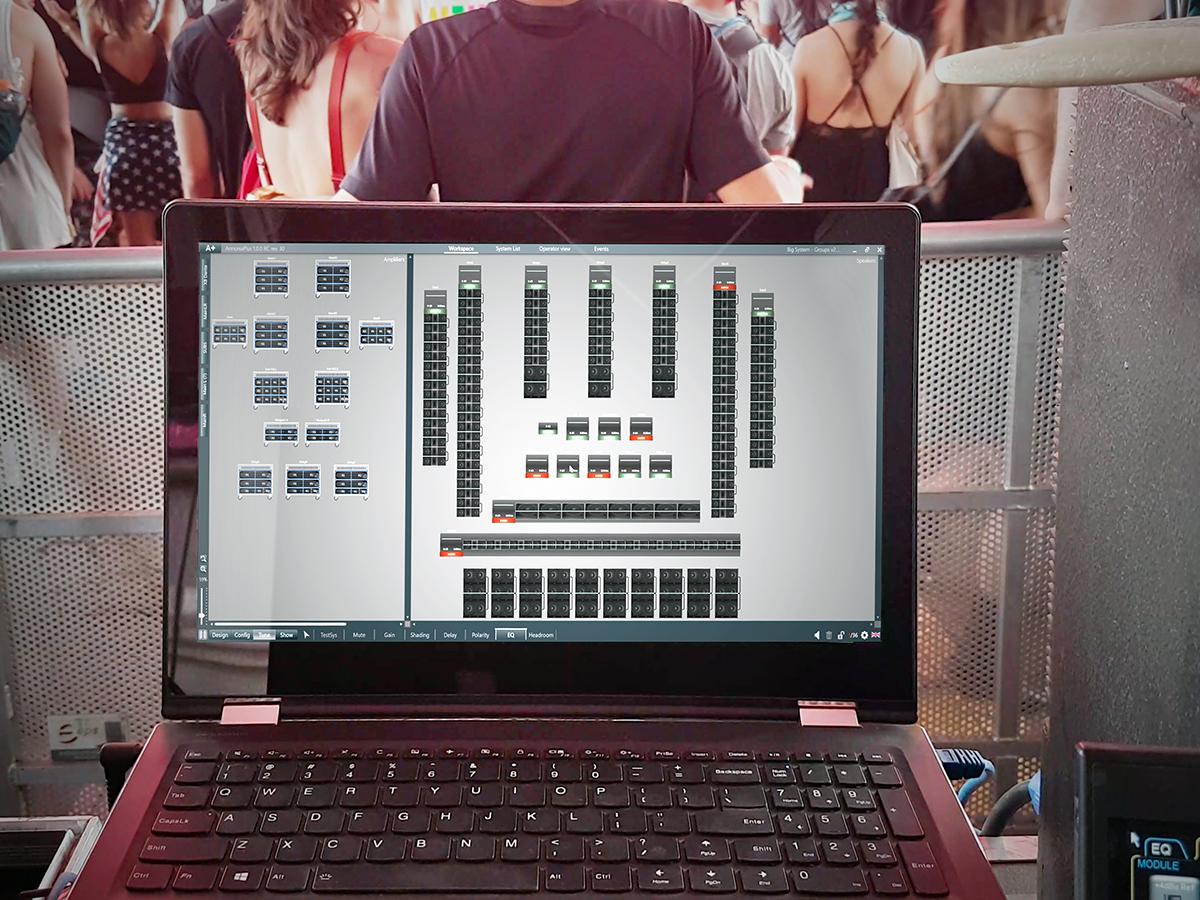 Powersoft's ArmoníaPlus has been rethought and completely redesigned to be the most efficient audio design environment on the market today, which takes users from system design to Showtime through a simplified guided workflow. "Users will feel completely at home within the ArmoníaPlus layout," the Italian company claims, "In an environment controlled via intuitive hotkeys and simplistic icons, users can fly between functions in a time-efficient manner."

The ArmoníaPlus interface presents a single window with four main views: Workspace, System List, Operator View, and Events. Workspace is where all the main action takes place - a natural environment where system engineers can plan and work. The Workspace is divided into two parts, with amplifiers occupying the left-hand space and loudspeakers sitting on the right. Users can move through four main steps: Design, Config, Tune, and Show, each offering a variety of functions. Once the link function is completed, operations can be carried out directly at the loudspeaker. Auditioning different presets is as easy as selecting the loudspeakers to control, so that their applications can be changed through the Tune:Preset page.

The layout and all control is visually intuitive. Amplifiers can be added directly to a rack, while loudspeakers can be grouped together, vertically and horizontally as users would expect them to be in the physical realm. Arrays of loudspeakers can be ‘packed’ together so that when linking amplifiers, an algorithm will auto-select the next item, based on proximity, model and position on the screen, thus avoiding manual errors.

Creating advanced groups of loudspeakers offers the possibility of adjusting Gain, Delay, Polarity, and EQ. The redesigned graphical interface delivers information that is simple to absorb. The new Tune:EQ page allows users to monitor the overall curve applied to every speaker, including countless groups. A special Headroom meter adapts its LEDs based on the limiters of the speaker itself, showing an at-a-glance view of how hard the speakers are being driven.

The interface is designed to be free from sub-menus, with every function available via either a right-click or just a Hotkey. Operations that took users on an arduous trail of mouse-clicks have now been simplified. To set amplifiers to static IP mode, for example, users can just select the devices and ArmoníaPlus will assign the available addresses progressively, starting from the desired one. Damping subs is achieved from a single slider or selection until the punchiness of the low end is re-established.

And ArmoníaPlus simplifies sound system design even more. Each portion of a sound system project can be exported as a “template,” a building block for a bigger system which can be replicated in the Workspace as required.

The new software also introduces some innovative functions such as Shading. With the shading function ArmoníaPlus can reduce the gain and the loudspeaker limiter thresholds coherently, keeping the balance between elements even if the system is limiting. This means an end to ruined dispersion patterns, caused by the loss of relative gain adjustment as the sound system is pushed into limiting.

Tutorial videos are available on the Armonía website, and the new software can be downloaded here: armonia.powersoft.it
www.powersoft-audio.com
related items