For start, Powerbeats Pro comes in 4 colors: Ivory, Moss, Navy and Black - not just white. Also, the Powerbeats Pro are in-ears and do not use the unique hard plastic shell design that Apple introduced in its EarPods and continues to use in the AirPods, which is fine for millions of users, but not comfortable for people with smaller ears and concha, and not good enough for anyone demanding higher audio quality which only the in-ear format can provide. As Beats states, the Powerbeats will sound superior to most completely wireless stereo headphones and - as implied - to Apple's AirPods.

According to Beats the new Powerbeats Pro were designed to be used in workouts, physical activities and while on the move, with superior fit via the signature earhook design - an evolution of the brand's Powerbeats Wireless design. Being completely wireless earphones that deliver powerful sound, the Powerbeats Pro leverage a deep integration between Beats and Apple engineering, featuring industry-leading battery life, advanced functionality, and reliable connectivity. Each earbud offers up to 9 hours of listening time and more than 24 hours of combined playback with the magnetic closure case. 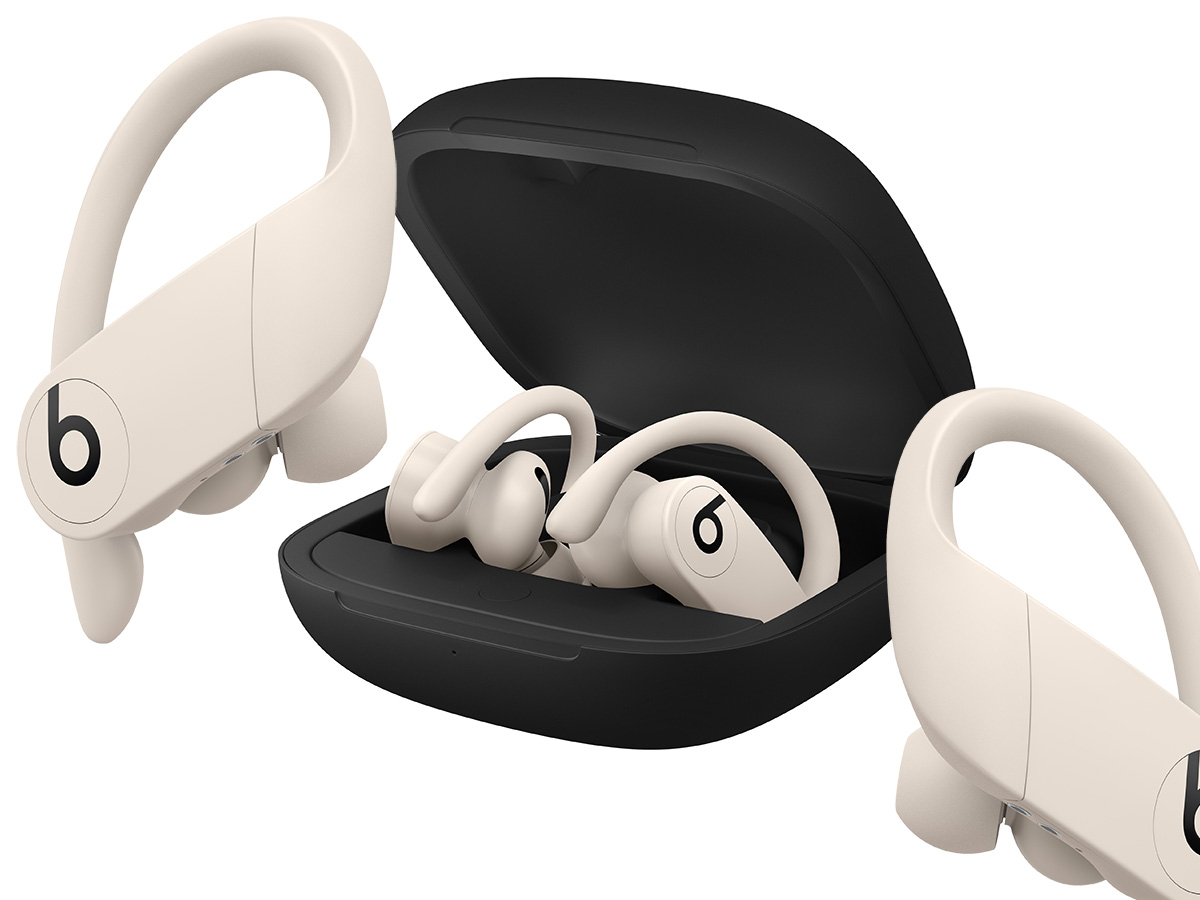 "Powerbeats Pro is a harmonious blend of premium sound, fit and functionality. Powerbeats are already the #1 fitness headphones in the world and they are now untethered, with all the benefits of the Apple H1 chip,” says Luke Wood, president of Beats. “No longer do you have to choose between performance and practicality — it delivers the best on both fronts.”

Also according to Beats, sound was the highest priority in the development of Powerbeats Pro. "Completely re-engineered from the inside out, the earphones boast an upgraded linear piston driver that leverages an efficient, pressurized airflow to create a powerful acoustic response in a small package. Enhanced sound quality means incredibly low distortion and great dynamic range across the entire frequency curve," the company states.

Comfort, fit and stability was the other priority in the Powerbeats Pro's design because of its direct impact on sound delivery. To achieve the best possible fit on the widest array of ears, over 20 configurations were electronically modeled and physically tested. The result is a completely new, ergonomically angled acoustic housing that nests comfortably in the concha bowl of the ear with an off-axis nozzle. It comes with four sizes of ear tips and a redesigned, adjustable earhook — an iconic part of the Powerbeats line since its launch in 2010.

The design is also 23 percent smaller than its predecessor Powerbeats 3 and 17 percent lighter. The lightweight, fully functional, ambidextrous design is also sweat- and water-resistant, with identical, physical volume and track controls on each earbud. This means users have full control over their music and phone calls, regardless of whether they use the left, right or both earbuds. Also, long- and short-range optical sensors drive automatic play/pause and call handling when the earphones are placed in or removed from the ears.

For phone calls, a speech-detecting accelerometer in each earbud and two beam-forming microphones per side target the user's voice and filter out external sounds such as wind and ambient noise. This means the user can answer a quick mid-workout call at the gym with clarity and confidence. 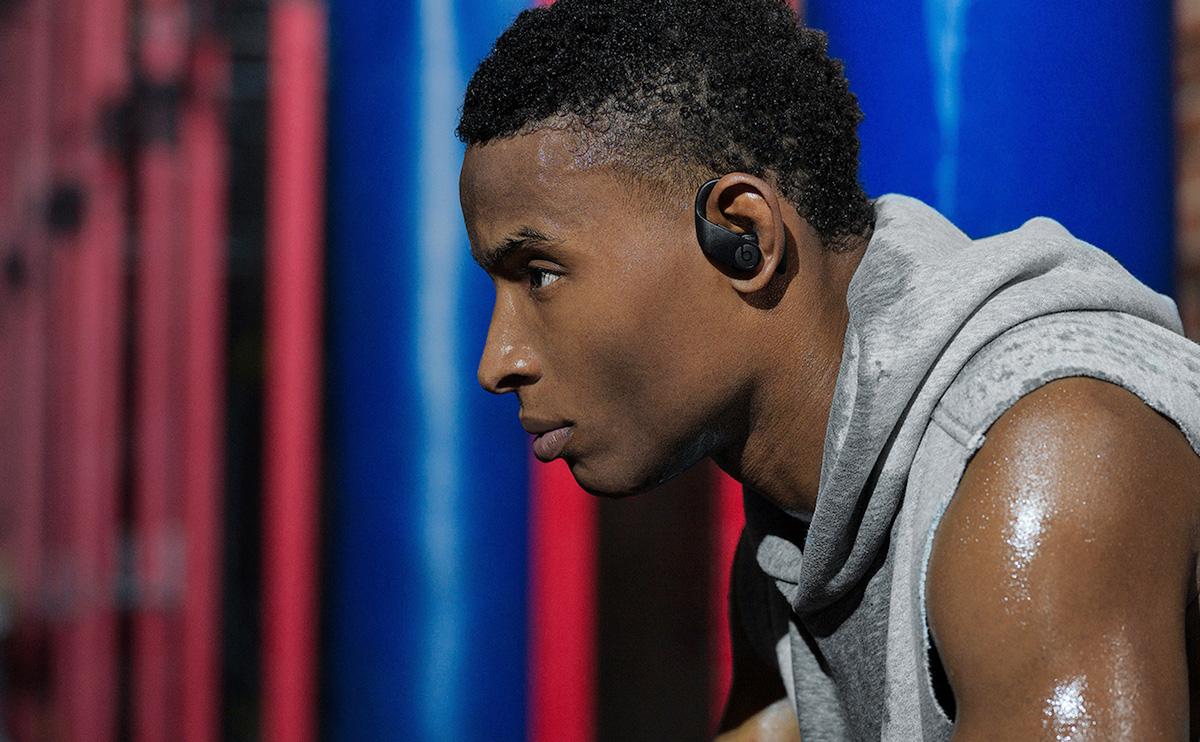 Each Powerbeats Pro earbud has up to 9 hours of listening time and more than 24 hours of combined playback with the magnetic closure case. With a fast charge (Fast Fuel,) users can get 1.5 hours of playback after just 5 minutes of charging and up to 4.5 hours after 15 minutes of charging. The earphones power on when taken out of the case and power off (and charge) when placed inside. Motion accelerometers detect when the earphones are idle and not in use, automatically entering them into sleep mode.

And like Apple's own AirPods, the Powerbeats Pro feature Class 1 Bluetooth technology to offer extended range (more than 100 feet/30 meters) and exceptional cross-body performance, meaning fewer dropouts. Each earbud independently connects to the device, so users can choose to use one or both and the devices gave a different configuration for each scenario. Also, pairing is done via the Powerbeats Pro case — simply opening the lid for the first time prompts pairing mode. Each Powerbeats Pro is automatically paired with any supported devices that are signed in to the user's iCloud account on iOS - even if they also support Android devices. A small detail is that the Powerbeats Pro ship with a Lightning to USB-A charging cable.

Given that the H1 chip from Apple is built-in, users can also simply say “Hey Siri” for voice-activated assistance without having to reach for their iPhone, in countries and languages where Siri is available.

The new Powerbeats Pro will retail for $249.95 (US) and will be available starting in May 2019 from apple.com and Apple Stores in the US and more than 20 additional countries and regions.
www.beatsbydre.com
related items