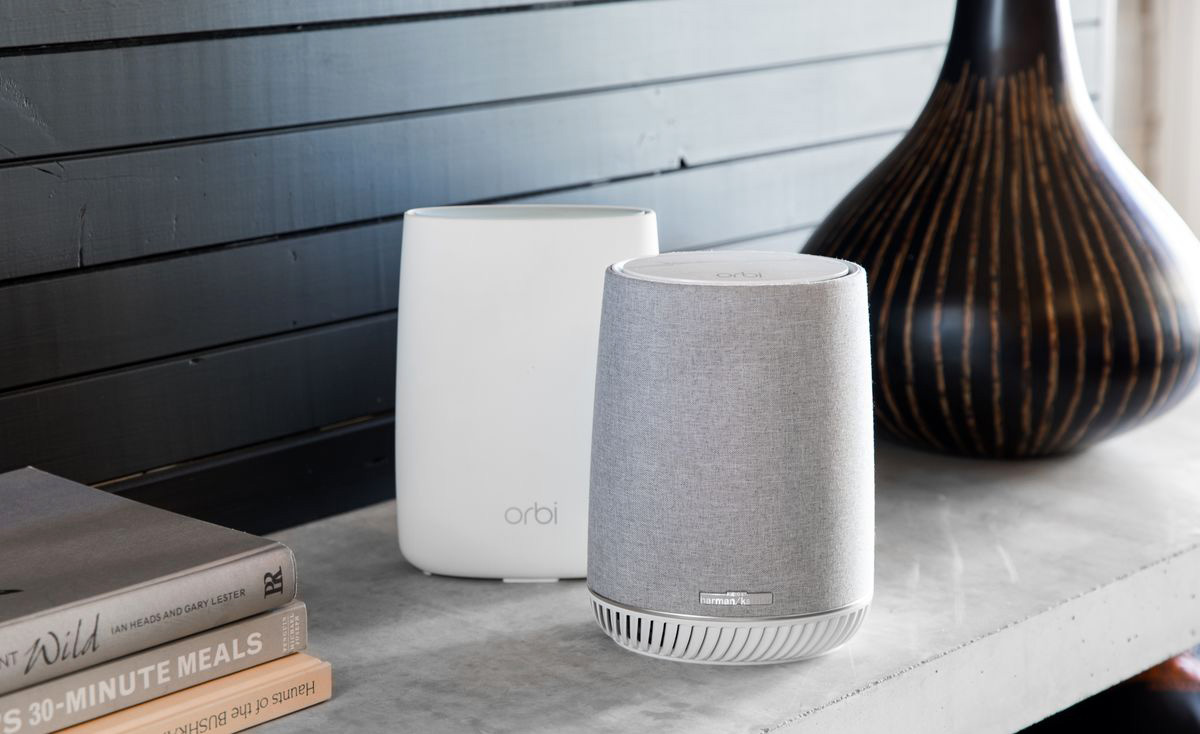 According to Netgear, this is a combination of the mesh WiFi technology to create a winning combination: "The world’s first mesh WiFi System with Orbi Voice Smart Speaker and WiFi Mesh Satellite with Built-In Amazon Alexa. It's not a two-in-one product but the integration of two products, optimized to work together for whole home audio and voice recognition.

Orbi Voice, as part of any Netgear Orbi WiFi System (a range of WiFi home routers) creates expansive whole home WiFi coverage up to 4,500 square feet (186 square meters) or more of high-performance wireless network, with up to 3Gigabits per second combined WiFi speed. This creates an ideal environment for wireless audio as well, inspiring the idea of integrating a smart speaker by Harman Kardon. With the built-in Amazon voice assistant capability fully integrated into the Orbi Voice Satellite (that's what Netgear calls the Harman Kardon-designed speaker), users can ask Alexa to play music from the most popular music services as well as, set alarms, control all sorts of connected devices, check traffic, weather, etc., without needing a separate Amazon Echo device.

“The two fastest growing consumer trends for Smart Home technology have been the popularity of the voice assistant control and the growth of WiFi mesh systems. Netgear, the established leader of WiFi Mesh with our award-winning Orbi Whole Home Tri-band Mesh WiFi systems and Nighthawk Mesh WiFi extenders, is driving the next step in innovation by combining Alexa and a WiFi mesh satellite into a single consumer solution,” explains David Henry, senior vice president of Connected Home Products for Netgear. 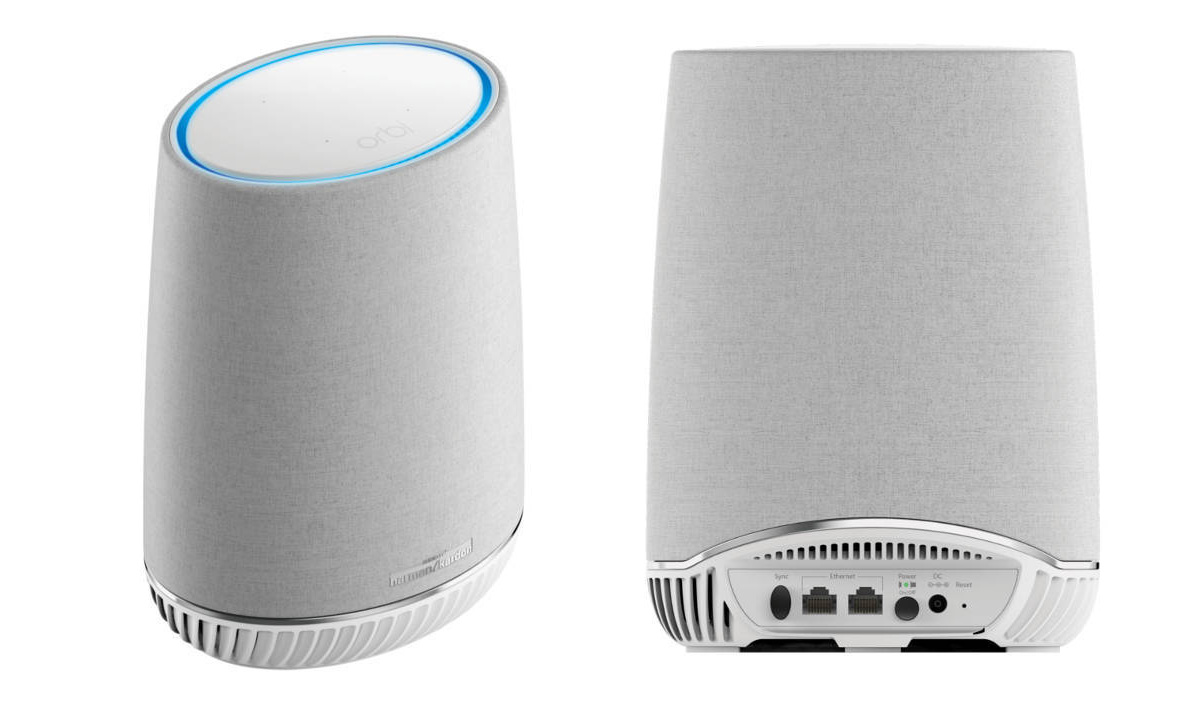 “Orbi Voice is the result of combining the three key technologies used in the Smart Home environment in order to deliver both exceptional WiFi and quality sound from our audio technology partner Harman Kardon. It is also widely known that the most popular skill employed with smart speakers is to enjoy streaming music services. To address this need, we have taken our expertise in WiFi and married it with a legend in the industry, Harman Kardon, to deliver superior sound quality while aligning with the leading providers of streaming music to give our customers the best WiFi and HiFi in one package.”

The smart speaker itself, Orbi Voice provides a captivating listening experience, combining an audio design by Harman Kardon - typically called "exceptionally rich, room-filling sound" these days - with a built-in four-microphone array and far-field voice recognition processing engine to enable voice commands from across the room. To easily adjust the volume and equalizer controls, there is a tactile surface on the top of the speaker, plus the Orbi mobile app, which allows to adjust the treble and bass emanating from the 3.5-inch front-facing woofer and 1-inch tweeter.

“Products that solve multiple consumer needs are increasingly in demand, and the exquisite sound quality of Harman Kardon elevates the dynamic Orbi Voice Smart Speaker,” adds David Rogers, president of Harman’s Consumer Audio Business Unit. “We’re pleased to partner with Netgear to bring this product to consumers looking for a single device that offers tremendous audio, in addition to its voice intelligence and WiFi capabilities.”

With a modern design, Orbi Voice is a typical smart speaker to display on a bookshelf or kitchen counter, so users can listen to their favorite music and podcasts in any room. "Combining a voice service, high-end audio and high-performance WiFi in one device, eliminates the clutter of three individual products to deliver the same features. With Orbi Voice, you will ask Alexa to enjoy music from the most popular music streaming providers, such as Spotify, Amazon Music, Pandora, iHeartRadio, TuneIn, Deezer and other services. You can also turn to Orbi Voice and ask Alexa to paly audiobooks from Audible, podcasts, radio stations, news briefs, and more – all you have to do is ask," adds Netgear.

So, essentially, Netgear's contribution in this space is directly related with the closed integration in the company's Mesh WiFi system. "The new Orbi Tri-band Mesh WiFi System with Orbi Voice Smart Speaker and WiFi Satellite (RBK50V) delivers up to 3Gbps high-performance WiFi coverage for homes up to 4,500 square feet (418 square meters) for a nearly zero buffering and no dead zones WiFi experience," the company explains (and yes, such is the complicated long name of the solution...)

Setup for an Orbi System is easy using a mobile device through the free Orbi app. It offers easy network management and helps to keep the device current with automated Orbi software updates for new features and WiFi enhancements. Through the Orbi app, users can also set Circle Smart Parental Controls to manage content and time spent online on a per-child or per-device basis. The system also allows to manage separate guest WiFi networks and other advanced router features. 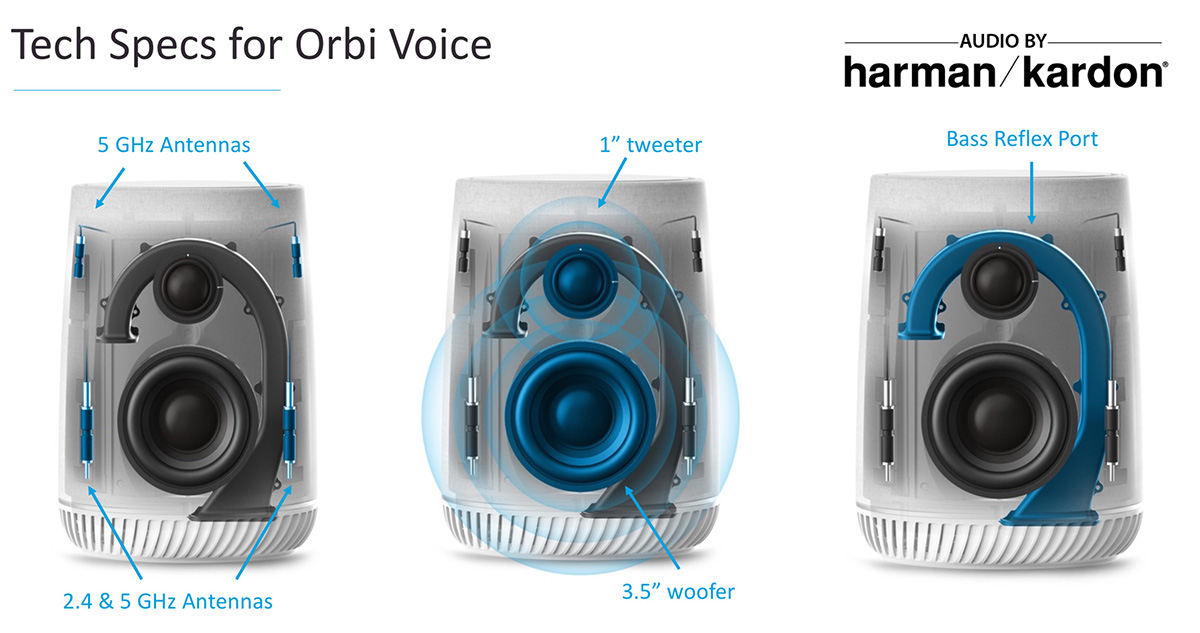 Each Orbi Voice Satellite offers two Gigabit Ethernet ports for connecting wired devices for faster file transfers and reliable connections. An Orbi Mesh WiFi System (RBK50V) consisting of the Orbi Tri-Band WiFi Router plus one Orbi Voice Smart Speaker and WiFi Satellite will be available in October 2018 for an MSRP of $429.99 (USD) or €499.99 (EUR).

For those who already have a Netgear Orbi WiFi system, the add-on Orbi Voice Smart Speaker and WiFi Mesh satellite (RBS40V) by NETGEAR will be available at an MSRP of $299.99 (USD) or € 329.99 (EUR).
www.netgear.com
related items