Responding to the frustrations of many owners of digital music libraries to find and quickly play music in large and varied music collections, Melco introduced a new powerful music search/metadata software incorporating MinimServer's Intelligent Browsing with SongKong metadata within Melco hardware. The solution, introduced at the 2019 High End show in Munich, breaks free from the constraints of the physical CD that was used to rip music into Melco's servers, now offering metadata integration matching users' search and intentions. 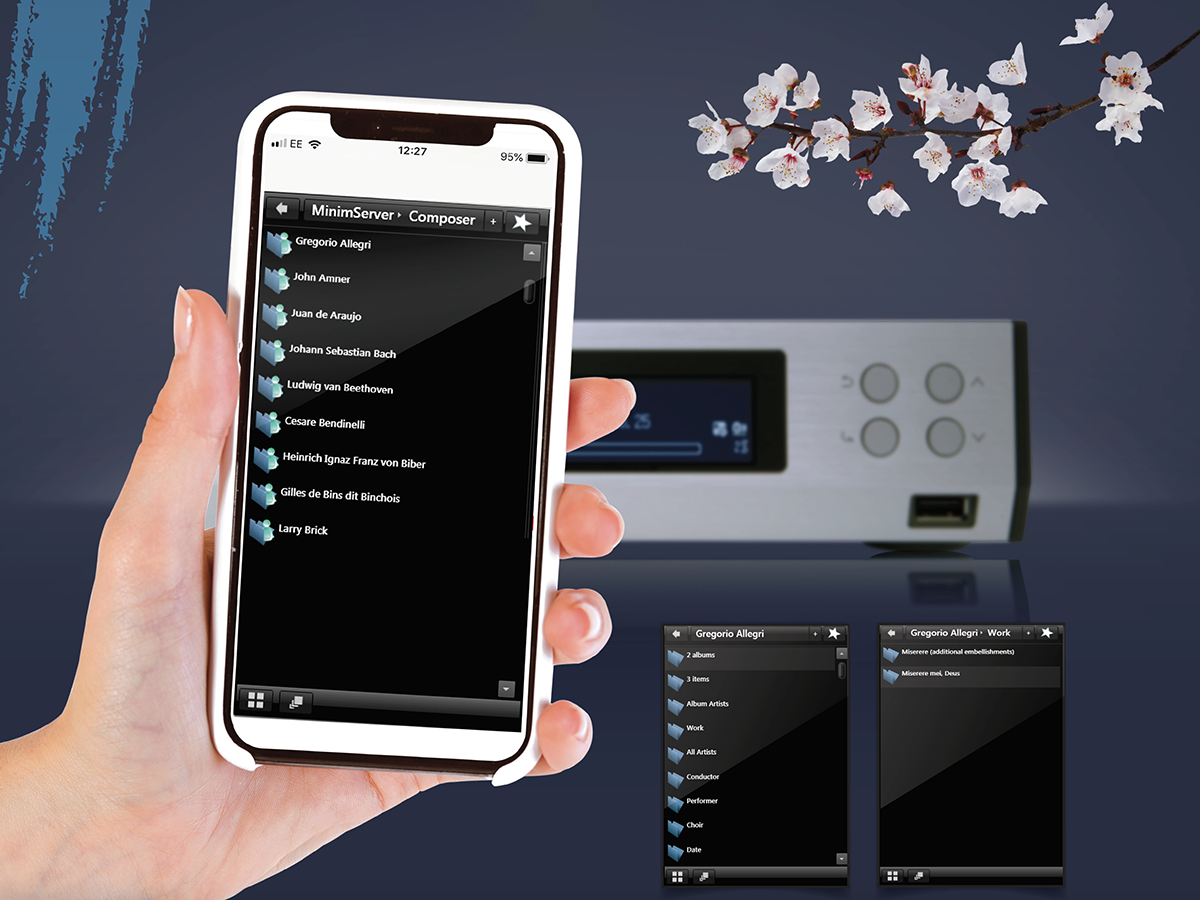 Together, MinimServer, SongKong and Melco have integrated the full functionality of a powerful metadata engine to a pre-configured versatile UPnP server, resulting in accurate and easy browse, search and play features for large collections and all genres of music. The solution is available for all Melco digital music libraries, including the new N10 and N100 compact-chassis models, and will also be available as a firmware update for existing Melco users.

Melco's Intelligent Music Library enables simple but powerful music search and selection for playback on any network music player or connected USB DAC. As the Japanese company explains, the solution implements a Metadata Engine (SongKong for Melco) and UPnP Server (MinimServer with Intelligent Browsing), each precisely tailored to the needs of the other, in order that they operate as a whole. As they explain, "the conventional separation of metadata structure and UPnP server is the root cause of most problems that users experience trying to find music on their servers." 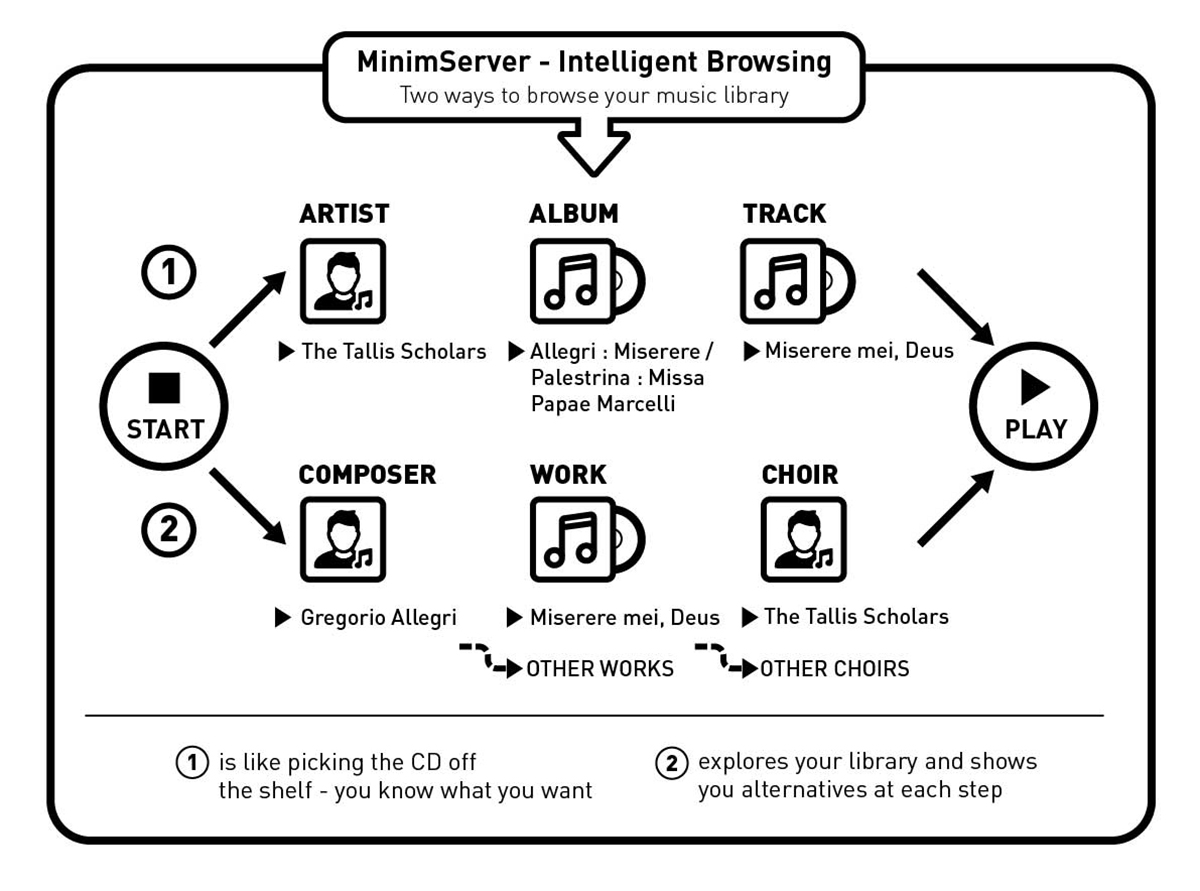 The integration of MinimServer, SongKong and Melco's Intelligent Music Library, enables MinimServer to offer browsing based on the consistent metadata set from the SongKong software, in a format transparent to the user. "By carefully tuning SongKong to deliver precisely the metadata set that MinimServer requires to deliver the search functionality, Melco has made it possible to break away from the notion of an ‘album’. Many CDs or sets of imported music, especially classical, are not really ‘albums’ but collections of songs or works. Conventionally, browsing for a whole album is easy but finding the constituent elements or works becomes very difficult without Melco Intelligent Music Library; multi-disc sets or compilations, for example, fail to browse correctly if treated as albums," Melco details.

The Melco Intelligent Music Library system automatically senses whether each CD or download is classical or not and returns searches based on works (if necessary) rather than albums, unless albums were requested. Clever ‘Profiles’ also allow the browse experience to be changed based on the main types of music searches – rock and pop, jazz and classical etc., to fully exploit the full extent of the metadata available from SongKong, regardless of the player or control point app. After SongKong reports the exact contents of a library with all existing metadata, it will source additional metadata and create new tags in a consistent format, creating a new HTML file or spreadsheet reports of the library showing all additional metadata. Users are then able to apply manual edits to just a single track or single album as well using the simple web interface. 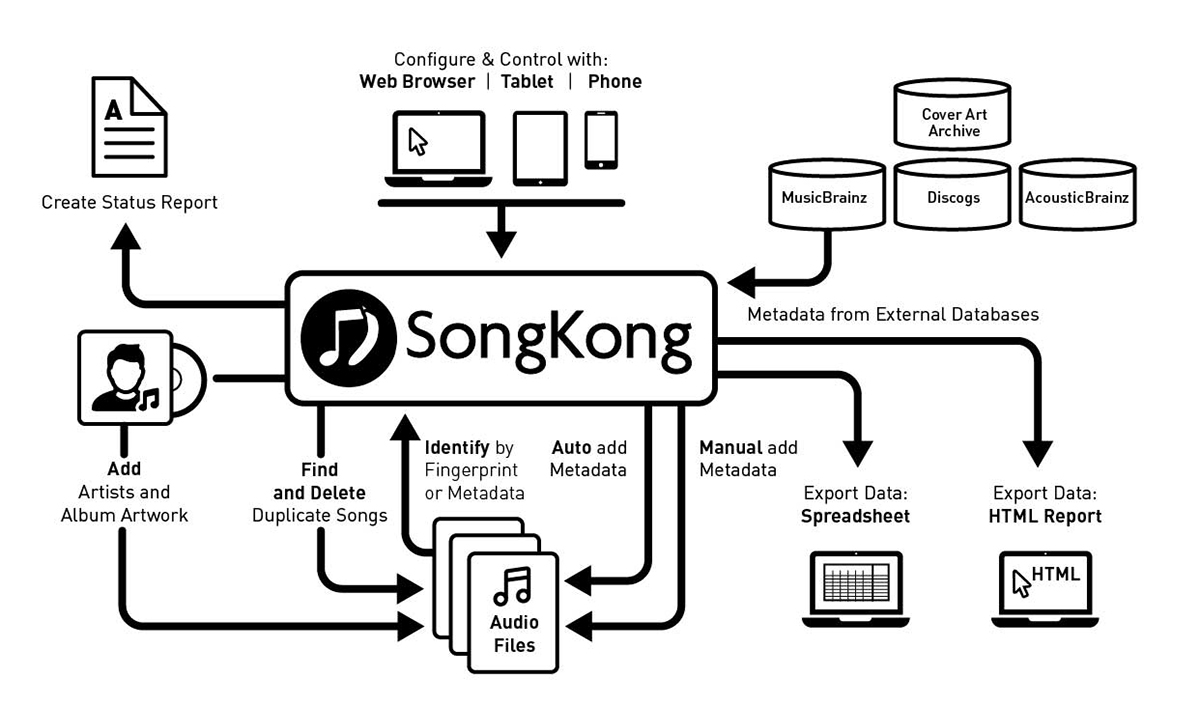 "Finding CDs on the shelf was always easy and has never been replicated on a music server until now with the Melco Intelligent Music Library. However, sometimes finding the right CD on a shelf was tricky with CD so often an assembly of various pieces of music; remembering what is where is not so simple," explains Daniel Raggett, Melco Business Development Manager.

"Melco Intelligent Music Library with MinimServer Intelligent Browsing incorporated is even better than finding CDs on a shelf, as the browse is automatically optimized based on the type of music. And based on the deep metadata of SongKong, MinimServer will present an accurate and logical browse tree whatever the control device or player. Now, there is no going back to the old days of inconsistent metadata and confusing browse algorithms. A fine-sounding music archive is not a lot of use if you can’t find the music that you know is in there, somewhere.” 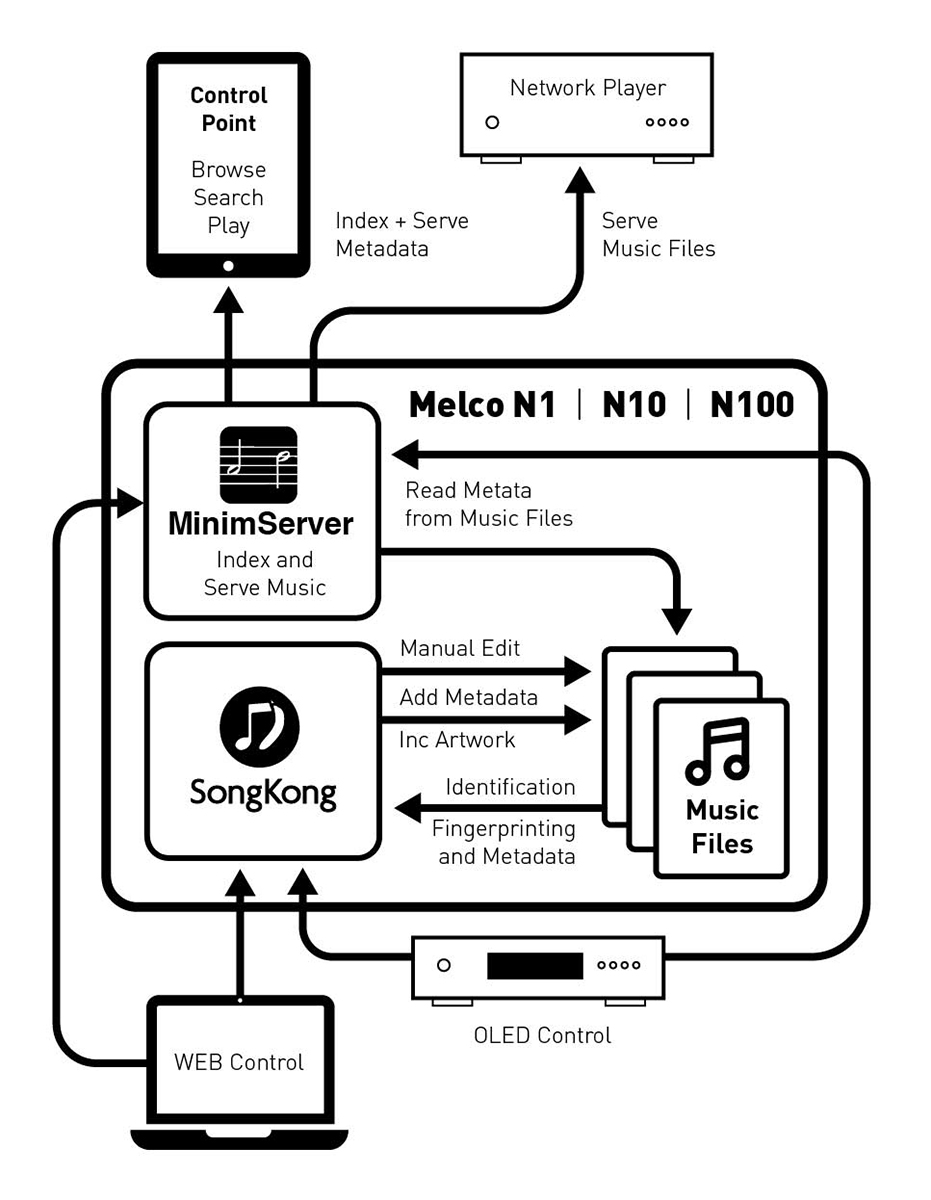 Melco (Maki Engineering Laboratory Company) was established by Makoto Maki in 1975 in Japan as a manufacturer of the finest audio components of the time. From those early beginnings, Melco
developed into the largest computer peripherals manufacturer in Japan (Buffalo Inc.), including wireless routers, Ethernet data switches and storage devices such as NAS drives. More recently, the company revived its Melco brand, offering high-quality  network audio components and storage devices in the spirit of the much-revered early Melco products.

MinimServer was created by Simon Nash in 2012 to provide a UPnP server with a better browsing experience for classical music than other UPnP servers available at the time. These servers were based around a fixed browsing hierarchy using a limited set of tags (primarily Genre, Artist and Album) with limited options for customizing the browsing experience. MinimServer introduced the concept of Intelligent Browsing, which enables the user to browse by any tags in any order and tailors the display format of each browsing selection based on the contents of the selection. This new approach to browsing proved very popular with users, not just for classical music but also for rock/pop and jazz. Since its initial release, MinimServer has been enhanced substantially based on user feedback and requests, and is supported via an active user forum. MinimServer runs on a large number of platforms and is compatible with a very wide variety of UPnP control points and UPnP/DLNA music players.

SongKong was designed in 2014 by Paul Taylor (www.jthink.net) as an intelligent music tagger app designed to make the task of managing, organizing and cleaning up digital music collections easy and effective. As digital music collections grow, SongKong helps resolve all the metadata issues and allows all the tools and options users want to customize the results. SongKong is available for all major computer platforms; it is being continuously improved and is available for the complete range of Melco digital music libraries. 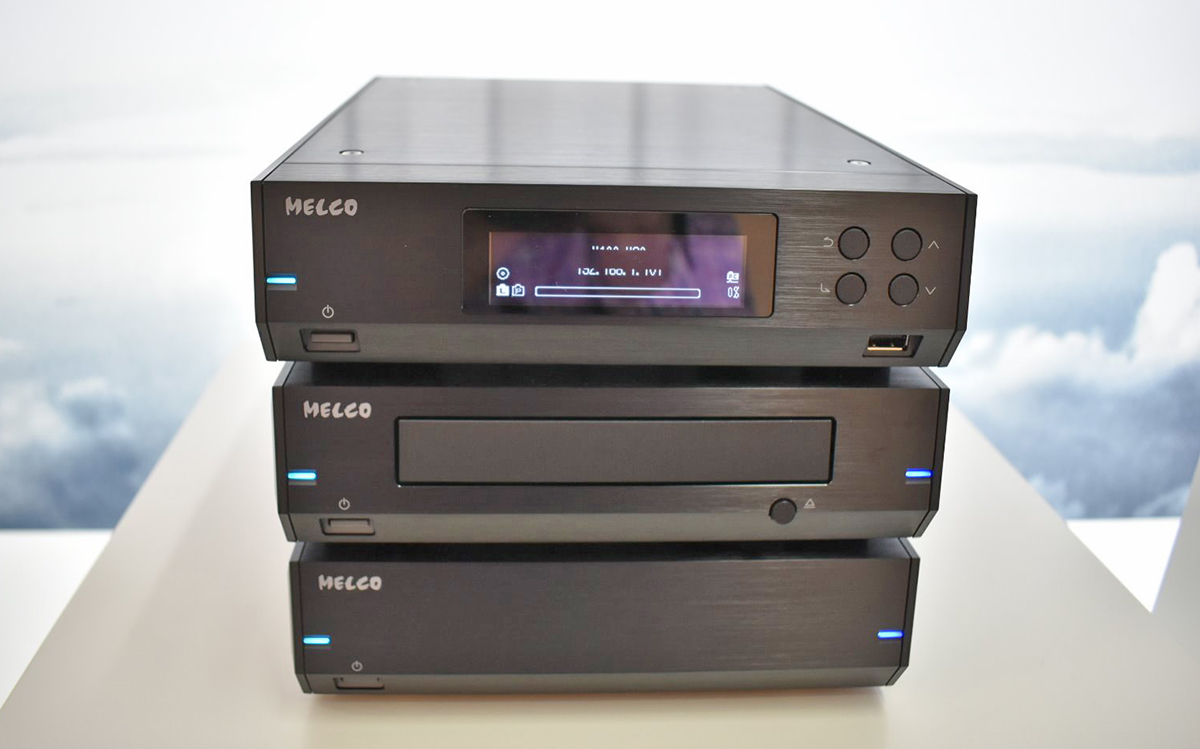