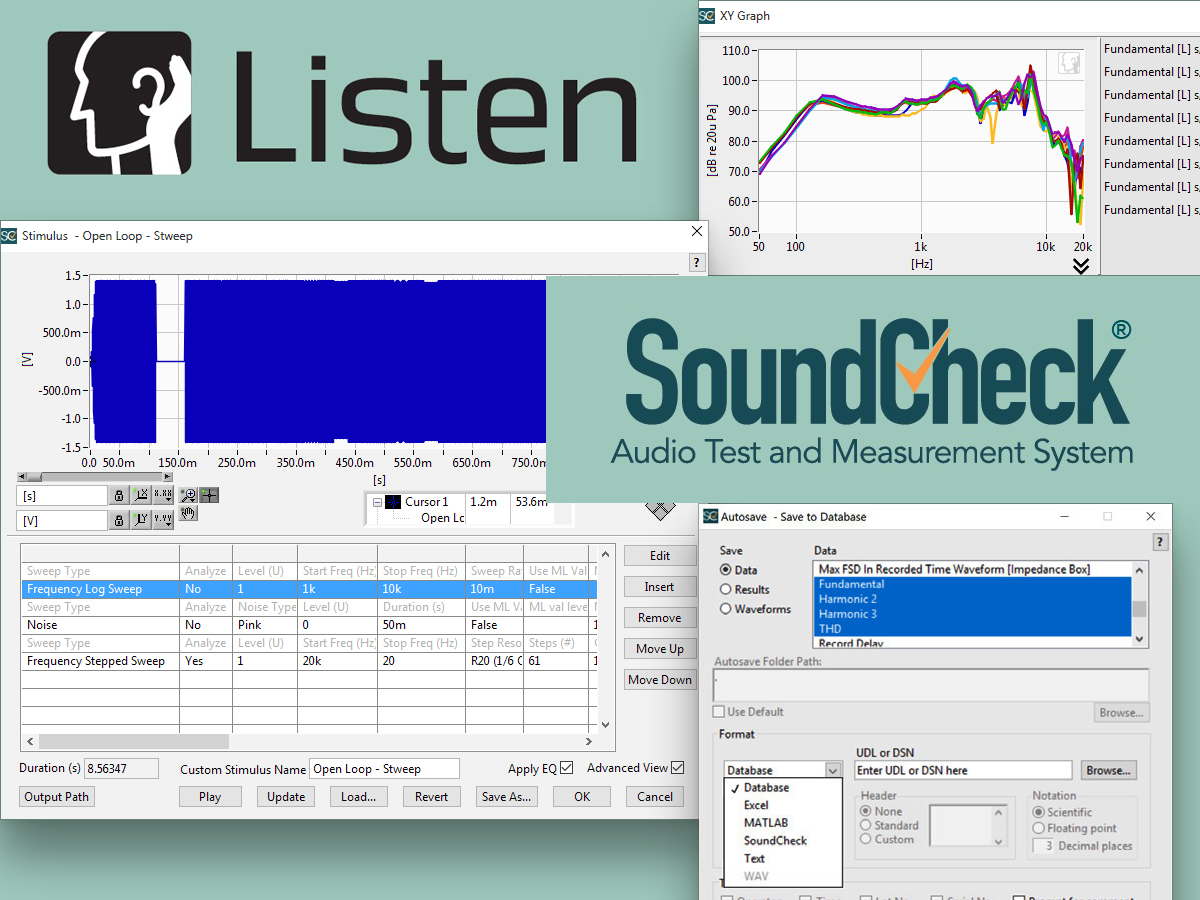 Since all software updates start with usability features, SoundCheck 17 offers increased flexibility in color pallets, save to MATLAB option, and the ability to recall CSV formatted text files. The improved color pallets now offer ultimate flexibility in defining colors for backgrounds, grids, cursors and graph lines. New default color palettes are included, and user-defined palettes can be saved as pre-set files which will be applied to any new display created. Multiple palettes can be saved, for example allowing different color sets for different applications.

An important request by many users, all data including memory list curves and Soundmap (time frequency analysis) data can now be saved to MATLAB for additional processing. Data is saved as a standard MAT file and can be manually or automatically saved in this format.
The new SoundCheck 17 now includes a new cross-correlation ‘smart trigger’ that offers improved performance for open loop measurements. By using a chirp-based conditioning tone and searching for the exact log sweep frequency, it is more robust and less susceptible to false triggers than simpler level and frequency triggers. This feature requires optional module 2006 (time selective response) to be installed.

Enhancements in version 17 make it 4x faster and 3x more space-efficient than previous versions. Such speed is achieved by saving to a binary format; SQL and Python tools are provided to facilitate data extraction so that detailed analysis and graphical representation may be implemented in any Business Intelligence (BI) system of choice (e.g. Tableau, Qlik,etc.).

Testing of multichannel devices such as microphone or speaker arrays is also much easier and faster as SoundCheck now reads multichannel WAV files from the memory list, signal generator and stimulus steps; there is no need to de-interleave the files in a separate utility before importing into SoundCheck. When opening a multichannel WAV file in the Memory list, each WAV file channel is named using the file name and channel number, and all channels are automatically grouped together.

Average Curve/WFM is a new post processing function that allows you to obtain the average curve (or waveform) of a selected group of data in the Memory List. It is particularly useful for power averaging selected curves, averaging curves from different spatial positions (e.g. microphone arrays), and complex averaging of multiple measurements with background noise.
SoundCheck 17 now supports the new aptX HD codec for high resolution Bluetooth testing, and is also supported in the newest version of the BTC Bluetooth Interface, which is fully integrated with, and controlled by, SoundCheck.

A 64 bit demo / data viewer replaces the 32 bit demo version. When the software key is not installed, previously measured data can still be recalled and viewed. For users who wish to additionally process stored data but have no need to acquire it, cost effective limited licenses are available.

Finally, meeting another popular user request, SoundCheck is now able to recall CSV files in addition to TXT files. A separate IMP file for the CSV format can be created allowing for automatic recall of CSV files. This makes its easier to recall pre-formatted text files.
www.listeninc.com
related items