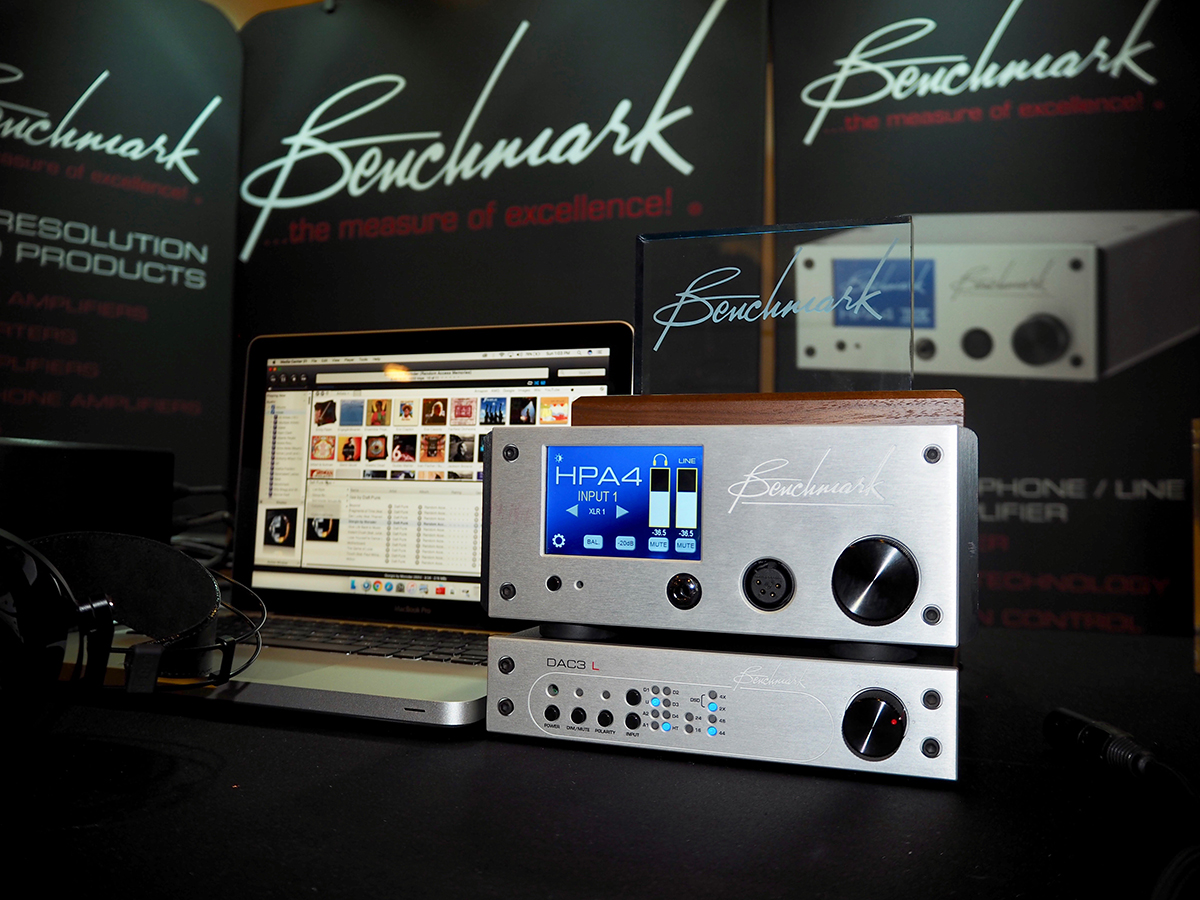 According to John Siau, VP of Benchmark, the company “chose to leverage the THX AAA™ technology because it reduces harmonic, intermodulation, and crossover distortion by 20 to 40 dB to guarantee a realistic and fatigue-free listening experience". This is the same THX technology Benchmark uses in their flagship AHB2 power amplifier. The HPA4 features the flagship THX-888 headphone amplifier design and is driven by an all-new Benchmark line amplifier featuring a fully-balanced 256-step relay gain control. A separate 256-step attenuator controls balanced and unbalanced line outputs. The HPA4 also features a touch screen and remote control capabilities.

The HPA4 is a completely analog product and is designed to be driven from an external DAC or analog source. According to Siau, “from start to finish the HPA4 development team has been focused on delivering the ultimate listening experience". The core of the line amplifier is a bank of four fully-balanced 256-step attenuators featuring gold-contact relays and precision metal film resistors. Siau added that “the attenuator relay closures are precisely timed to provide a silky-smooth volume control with precise 0.5 dB steps… this Benchmark system defines the state-of-the art for high-end volume controls.”

Benchmark expects that many users will purchase the HPA4 strictly for headphone use. Others will use the HPA4 to drive their favorite power amplifier and speakers. The HPA4 has independent volume controls for the headphone and line outputs and is well-suited for users who enjoy both modes of listening. This headphone amp / line amp configuration provides the flexibility to integrate with virtually any high-end audio system and is specifically designed to match the performance of the ultra-clean AHB2 power amplifier. 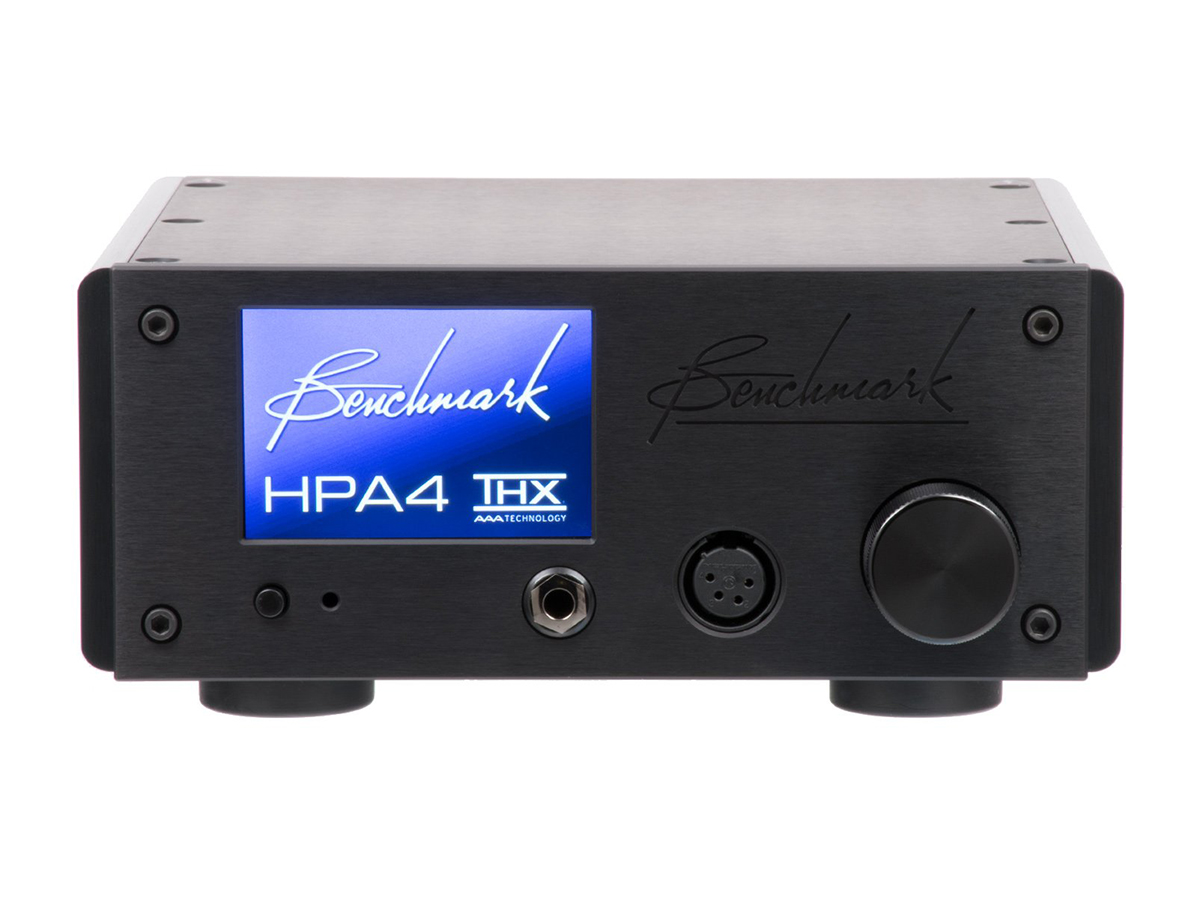 In the HPA4, the THX-888 amplifier is driven by a Benchmark line amplifier that features relay gain control, relay input selection, and relay muting. The line amplifier incorporates the finest gold-contact relays available. The gain control has 256 steps in 0.5 dB increments. It also features a balance control. Relay closures are precisely timed to deliver silky-smooth volume changes. The HPA4 includes 4 independent 256-step attenuators: two for the L&R headphone outputs, and two for the L&R line outputs. To make this all happen, the HPA4 includes a total of 64 precision relays.

The HPA4 is 100% analog. It is designed to be driven from an external D/A converter or an external analog source, and to provide the ultimate analog signal path between inputs and outputs. The THX-888 amplifier can cleanly deliver high voltage into low-sensitivity high-impedance headphones and it can cleanly deliver high power and current into low-impedance headphones. The HPA4 delivers 11.9 Vrms into 300 Ohms and 6 Watts into 16 Ohms. Given these extreme capabilities, Benchmark has incorporated several protection systems to protect expensive headphones and the amplifier itself. These include DC detection, short-circuit detection, over-current protection, over-voltage protection, and thermal protection.

The bandwidth of the HPA4 extends from 0.01 Hz to over 500 kHz. This means that the HPA4 delivers very precise amplitude and phase accuracy over the entire audio bandwidth. Wave shapes are accurately reproduced, and the entire spectrum is delivered with precise timing. The HPA4 will deliver musical overtones with life-like accuracy. This means that musical instruments are rendered without changing their sonic character.

The HPA4 is the perfect complement to the Benchmark AHB2. It may be the only preamplifier or line amplifier that exceeds the signal to noise ratio of the ultra-quiet AHB2. This means that the HPA4 will extract the full performance of the AHB2. In contrast, other preamplifiers limit the system noise performance because they cannot match the SNR performance of the AHB2. Also, the HPA4 can be inserted between a Benchmark DAC3 and AHB2 without degrading the system noise performance. With the HPA4 inserted, the DAC3's 32-bit digital gain control is replaced by the HPA4's more-resolving fully-analog relay gain control.

Two bidirectional 12V trigger ports can be used to link the HPA4 with external D/A converters and power amplifiers. The trigger signal controls the power-up and power-down sequencing of the entire audio system. The trigger ports are compatible with most industry-standard trigger input or output ports, but can communicate bidirectionally with other Benchmark products.

The touch screen provides easy access to advanced features such as balance control, input level offsets, input names, screen dimming, remote control, and function locking. Help screens explain the special functions. The HPA4 includes independent on-screen mute buttons for the headphone and line outputs. Both can also be muted with the volume knob or with the optional remote control.

The HPA4 includes an on-screen -20 dB dim button that instantly reduces the level by 20dB. This function provides a temporary volume reduction and an easy return to the previous listening level. This control makes it easy to transition between a normal listening level and a background level. The dim function is also accessible from the optional remote control.

Inputs may be renamed and unused inputs may be disabled. Input levels can be trimmed to provide input-to-input level matching. Screen brightness is adjustable and timers can be set to dim or shut off the display. The screen can be locked to prevent access to advanced features.

The HPA4 is available with a black or silver faceplate, designed to match the Benchmark AHB2 power amplifier. It occupies the same footprint as the Benchmark DAC1, DAC2 and DAC3 converters. The case features a milled faceplate and milled sides. Top, bottom, and rear panels are made from thick aluminum and feature a brushed texture.

Benchmark will be giving personal demonstrations of the HPA4 headphone amplifier and DAC3 D/A converters at their booth in the Axpona Ear Gear Expo located in the main Expo Hall. In addition, Benchmark will be demonstrating their DAC3 converters and AHB2 power amplifiers in the Schaumburg ballroom and in room 670.
https://benchmarkmedia.com/products/hpa4
related items