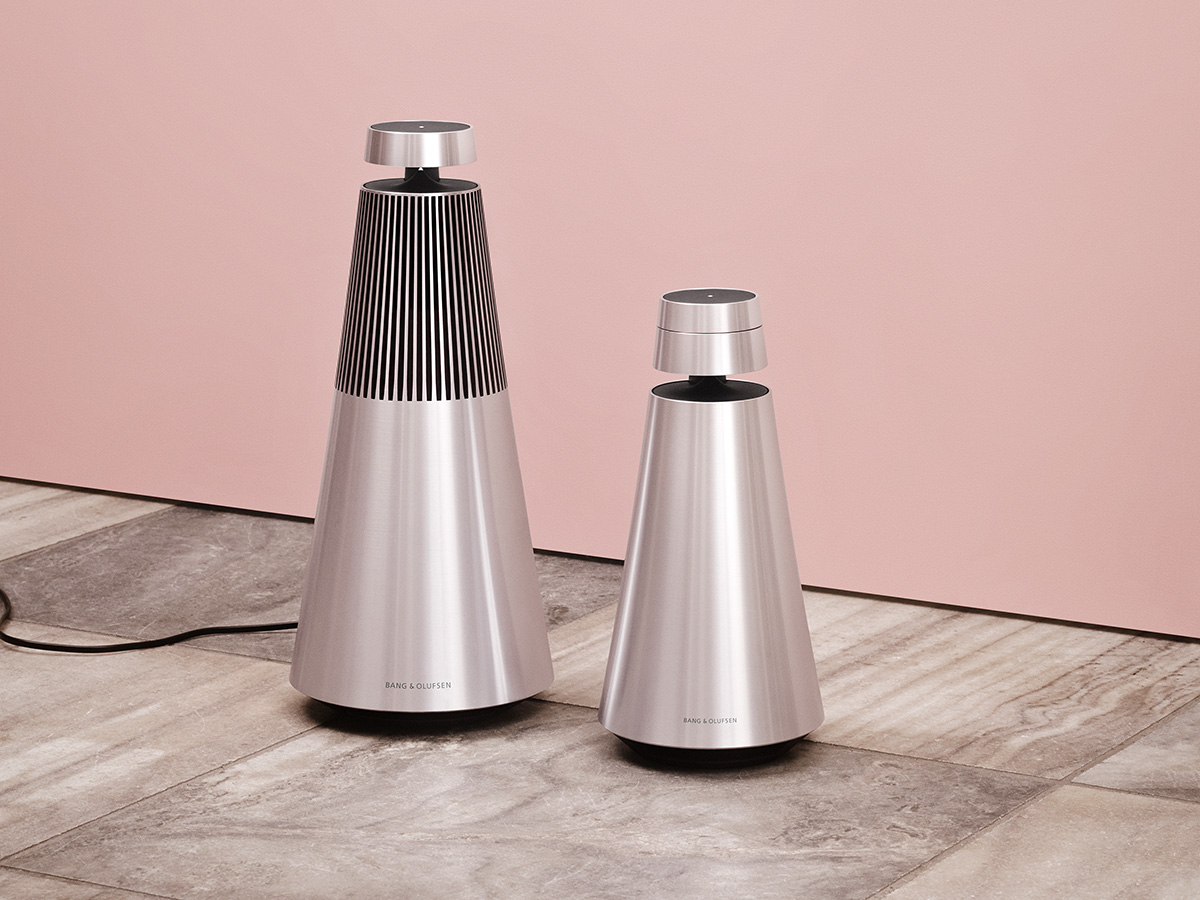 Already for many years Bang & Olufsen has been leading the way on wireless speakers, from introducing whole-home concepts to being the first company to offer uncompressed high-resolution wireless audio with WiSA technology. Unfortunately, Bang & Olufsen’s sophisticated concepts remain a distant reality from mainstream consumers and the audio industry  has seen increasing adoption of small and cheap portable Bluetooth speakers, which in return have created a foundation for user’s expectations in terms of wireless interactions - including sensor activated controls, and direct connectivity with wireless music services.

Designed by Torsten Valeur and David Lewis Designers, BeoSound 1 and BeoSound 2 from Bang & Olufsen are not exactly your cheap portable wireless speakers, but they were designed to excel in every mainstay area of what the market expects from the category, designed for convenience and featuring an impressive 360 degrees of “spherical sound magic.” As the brand admits, “The only certainty in technology, perhaps also life, is that things change. We all live different lives, and the challenge we put to ourselves is to create products that are relevant in as many contexts as possible. The way that you live and work is more flexible and fluid than ever, and we adapt and cater to that.”

BeoSound 1 and BeoSound 2 are Bang & Olufsen’s answer to an ever-changing everyday life; they are both ultra flexible in terms of usability, connectivity and placement options, no matter where the speakers are placed. The sturdy yet elegant aluminum design profile of BeoSound 1 and 2 blends into any interior and allows placing the speakers on a shelf, casually on the floor, by the coffee table or even outdoors. The conic bodies hover slightly above the ground, letting the thumps of the bass units out beneath. They are slightly open at the top for acoustical reasons, but also to accommodate sophisticated proximity sensors that enable control of the basic operations on the speaker intuitively. As the sensor detects the user’s presence, it is ready for commands with the user interface turned towards the user, no matter what direction he comes from. Turning the top wheel adjusts the volume, and simply swiping and tapping on the top triggers commands such as start/stop playing, change track, change playlist, etc.

BeoSound 1 is a portable lightweight wireless speaker with a battery-driven option for mobility, allowing up to 16 hours of playback. It has a small groove under the top to ensure a better grip when it’s lifted up and moved around. BeoSound 2 is its slightly bigger and more powerful sibling and it needs a permanent power connection. Both speakers  are equipped with the Acoustic Lens Technology renowned from classic Bang & Olufsen speakers such as BeoLab 5 and BeoLab 18. The acoustic driver is placed at the top of the speakers, playing into a reflector that creates a spherical and powerful 360-degree sound experience. 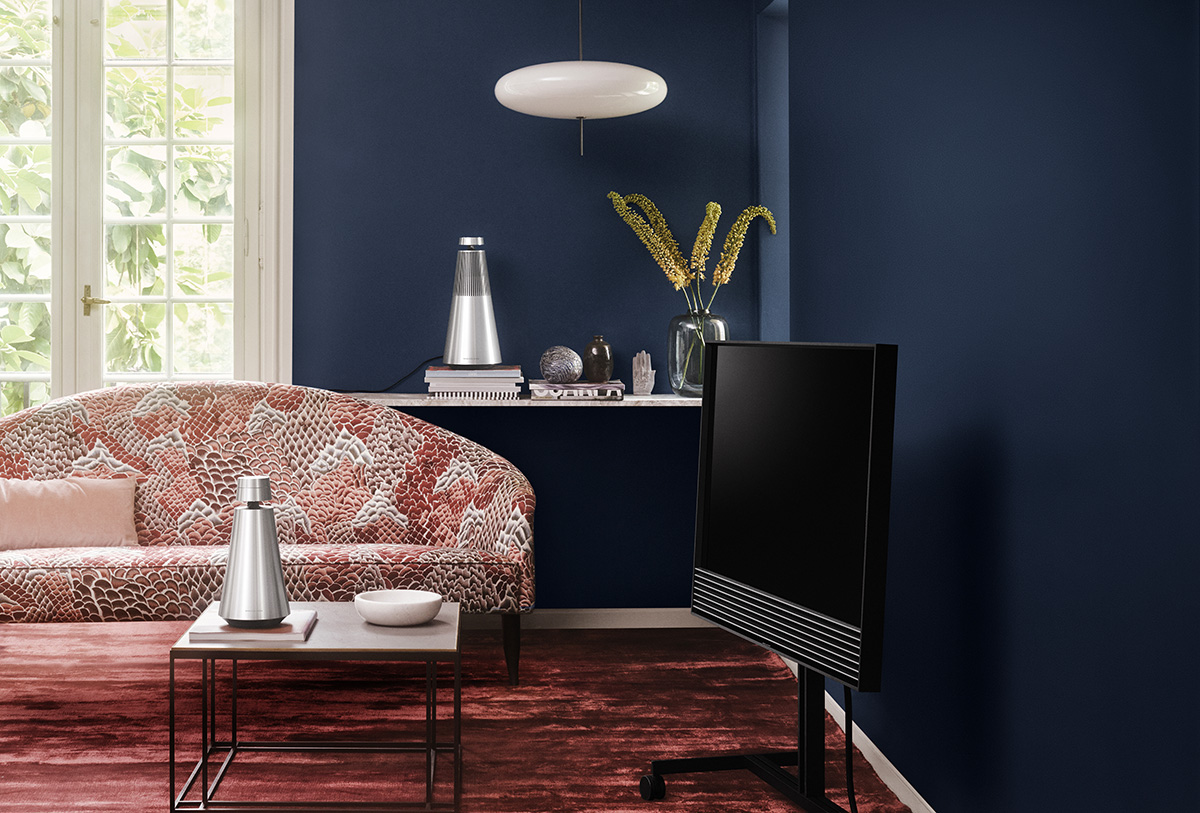 Both BeoSound models support 24-bit hi-res audio at standard sample rates up to 192 kHz and play all the standard audio formats, including AAC, ALAC, FLAC, WAV, and AIFF. Multiple connectivity options such as WiFi 802.11b/g/n (2.4 GHz & 5GHz), Google Cast, AirPlay, DNLA and Bluetooth 4.1 offer easy access from mobile devices and music apps. Both models provide integrated access to TuneIn Internet radio stations as well as Spotify and Deezer music services to allow streaming of music without using a smartphone or tablet. In terms of connectivity, both models are able to be connected with whole home systems in a multiroom set-up.

The slightly taller BeoSound 2 model was designed primarily as a stationary music system and to be used as an integral part of a BeoLink Multiroom solution, which means it can join and playback content from other sources just by a light touch on the top and works in sync with other BeoLink Multiroom products and other BeoSound 1s and 2s in the room or around the house. Sharing the same technology as the smaller model, the BeoSound 2 features a 3/4 inch tweeter placed at the top, two 2-inch midrange drivers playing through the aluminum grills on the side and a 5.25-inch bass driver placed at the bottom. Inside the speaker there are five Class D amplification modules, with 2 x 20 watts for the woofer, 2 x 11 watts for the midrange drivers and one 40 watts module for the top tweeter. On the bottom, we can find the same mains connector and RJ45 socket for Ethernet connection used for software updates, plus one mini-jack socket for line-in connection of external audio sources.

Both speakers use Bang & Olufsen specific technologies such as Adaptive Bass Linearization and thermal protection to avoid overload or overheating. Both models can be controlled directly on the devices, with the BeoRemote One Bluetooth or via the BeoMusic App, and both can be paired via the BeoSound Essence Remote. For the moment, Bang & Olufsen will launch the new BeoSound speakers in polished natural aluminum finishes, with some color options coming later. BeoSound 1 is available now at a recommended retail price of €1295/US$1495 and BeoSound 2 is available from end October 2016 at a recommended retail price of €1695/US$1895.
www.bang-olufsen.com
related items