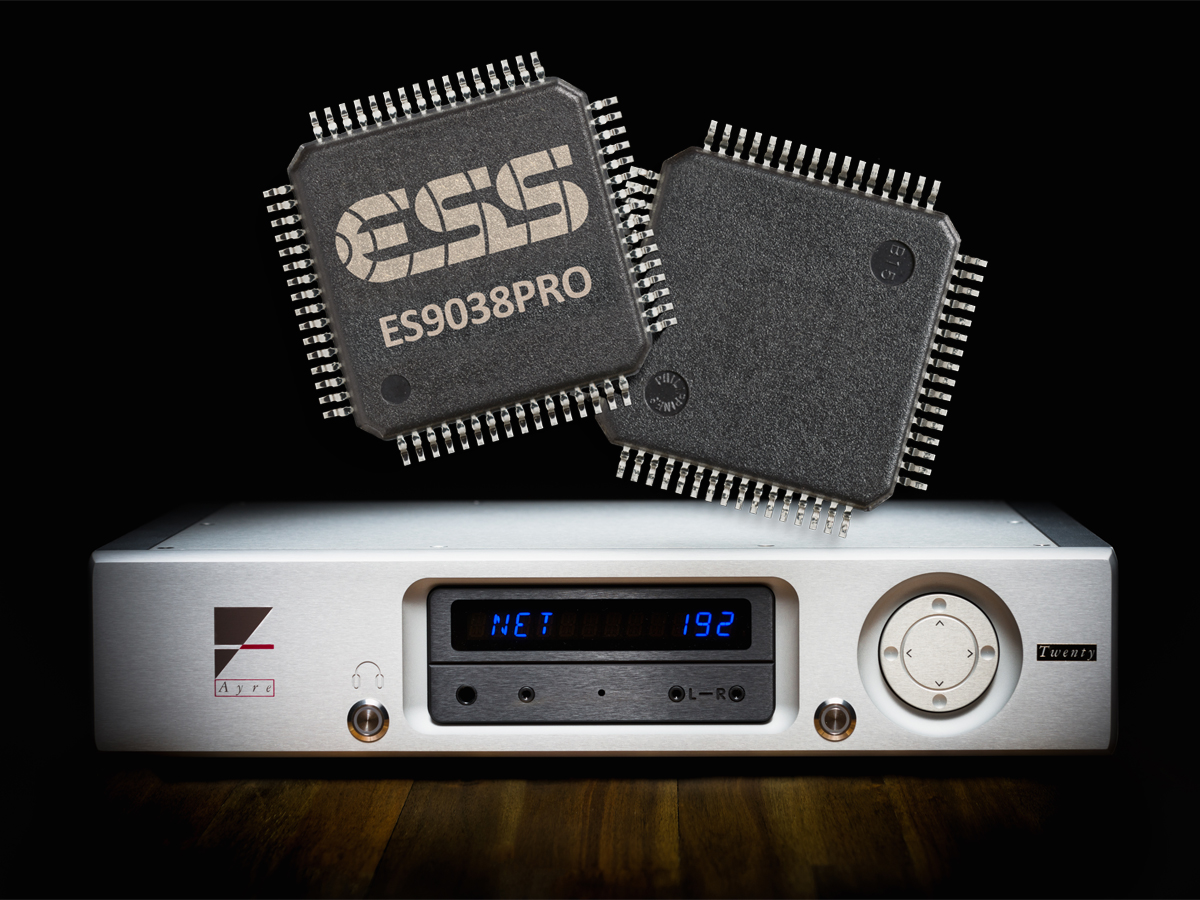 “When Ayre introduces a new platform, we source the best components and ESS is always at the top of the list. The design of our QX-5 Twenty digital hub was meticulously crafted to deliver an astonishing level of detail and purity,” says Charles Hansen, CEO and Founder of Ayre Acoustics. “The collaboration with ESS allows Ayre to deliver all of the music’s emotional power regardless of the file format.”

“ESS always improves on previous products and the ESS SABRE ES9038PRO breaks all the old benchmarks – both qualitatively and quantitatively. It has unmatched technical specifications and more importantly the sound is spectacular,” says Dan Christman, Chief Marketing Officer of ESS Technology. “It was natural for us to collaborate with Ayre, a company revered by both audiophiles and musicians for superb audio quality. The Ayre QX-5 Twenty extends the audiophile excellence that ESS and Ayre have built together over the past decade.”

Ayre’s new QX-5 Twenty Digital Hub features every conceivable digital input, including Ethernet, Streamlength asynchronous USB, S/PDIF (in three different formats), and even direct connection to thumb drives and NAS storage. Streaming with both Tidal and Deezer are fully supported, and Roon ready control is directly integrated as well. The ES9038PRO in the QX-5, combined with Ayre’s custom minimum-phase digital filter, implemented in a low noise FPGA, renders an astonishing level of detail and purity, regardless of format.

Ayre has also partnered with Morion (www.morion.com.ru) to develop a new high-performance crystal oscillator that offers the lowest levels of phase noise in the industry. Morion has decades of experience supplying satellite-grade crystal oscillators, including those powering the guidance system of the International Space Station. A specially developed new doubly-rotated cut quartz crystal allows this high level of precision timing to be achieved without the need for expensive temperature-controlled ovens.

The flagship ES9038PRO SABRE DAC sets a new benchmark for audio quality with the industry’s highest dynamic range (DNR), in a 32-bit, 8-channel DAC. The ES9038PRO was designed for premium audio equipment and for serious audio enthusiasts, featuring ESS’ patented 32-bit HyperStream technology with-122dB total harmonic distortion plus noise (THD+N). The HyperStream architecture is responsible for both the sound quality of the ES9038 and the extremely low THD+N.

Ayre Acoustics, Inc. has been steadily developing a full array of new audio and video technologies since 1993. Pioneering the use of zero-feedback real-time amplification, built on a foundation of the highest performance power supplies, and maximizing the circuit’s performance capabilities through the use of fully-balanced, differential circuits from input to output, Ayre’s designs have continually won countless awards for decades. All Ayre products are designed and built by hand in Boulder, Colorado, using only components from the highest quality supply partners in North America, Japan, and Europe.
www.ayre.com | www.esstech.com
related items