This month we bring you a report on some of the highlights from the Prolight+Sound 2014 show in Frankfurt, Germany. The show provided several innovative proposals for the professional audio industry. 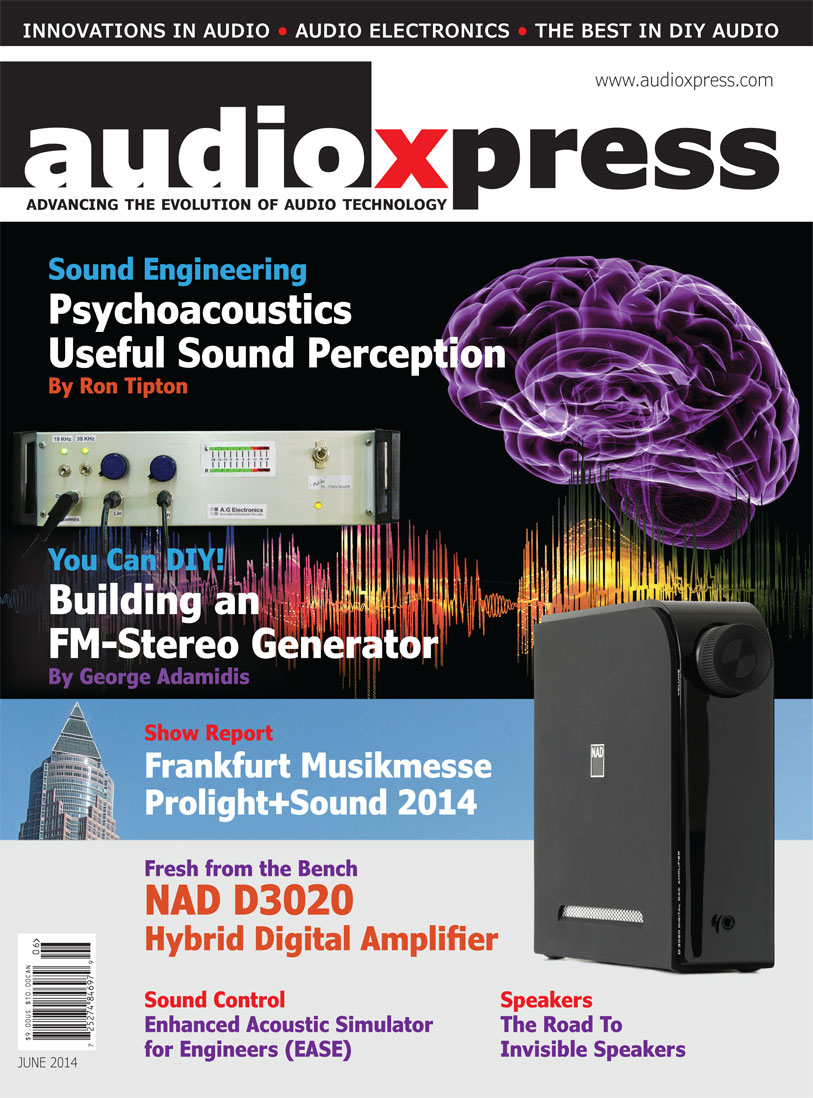 The June issue of audioXpress is now available.

This month we bring you a report on some of the highlights from the Prolight+Sound 2014 show in Frankfurt, Germany. The show provided several innovative proposals for the professional audio industry. Prolight+Sound 2014 confirmed the musical instrument and professional audio industries’ upturn and the manufacturers reserved lots of great product launches for the event. Powersoft launched its new X Series network amplifiers and displayed its revolutionary M-Force 01, which is moving magnet linear motor transducer. Yamaha launched the new QL1 and QL5 digital consoles, which include native Dante implementation and Dan Dugan’s auto-mixing technology. We also detail the surprising introduction of the new Midas Pro X 271-channel console, HARMAN’s Soundcraft Vi3000 console with onboard Dante connectivity, and the innovative Salzbrenner Stagetec Polaris evolution networked mixing concept.

We also discuss how Germany-based Optocore, in cooperation with DiGiCo and Clear-Com, offered a different view on the importance of network support by creating a network demonstration that connected three booths with audio, video, and control via a single-mode fiber. Optocore’s Marc Brunke confirmed that the Audio Engineering Society (AES) is in the process of finalizing an extension to its AES10 MADI standard, enabling twisted pair Cat5 connectivity in addition to the current options. Finally, we discuss the official launch of RCF’s new Mixer Division.

Our cover highlight is dedicated to the first part of a new and captivating series about Psychoacoustics. Ron Tipton delves into “the application of sound perception to accomplish a useful goal,” which is how he prefers to describe this science. In this article, he covers what he considers the four primary areas of psychoacoustics: audio enhancing, spatial location, noise reduction and sound masking, performing experiments in all four and sharing his results.

In our Fresh from the Bench section, Gary Galo reviews the NAD D3020 Hybrid Digital Amplifier, a surprisingly affordable but worthy successor to the 1978 original NAD 3020 stereo integrated amplifier. Galo explains why this new Class-D approach is an ideal proposal for current needs.

In our Standards Review column we bring a second serving about the new RAVENNA framework for Audio-over-IP (AoIP). After an explanation of the RAVENNA audio network distribution and how it is promoted and implemented, we dig deeper into the technology during a conversation with Andreas Hildebrand. Hildebrand is the senior product manager for RAVENNA at ALC NetworX, its main R&D and promotional entity. We look closer at the implications of the recent AES67-2013 standard on high-performance AoIP interoperability, as well as the possibilities with control protocols, such as the ongoing OCA Alliance effort. We also detail some recent examples of companies who decided to adopt this AES67 compatible, Layer-3 IP protocol and why.

In our DIY section, George Adamidis teaches us how to build an FM-stereo generator, based on FCC standards, using mixed digital and analog techniques. It is a great project!

This month, Shannon Becker interviews Andrew Roberts of Purple Audio. We learn a little more about the fascinating story of this entrepreneur and the imaginative range of professional audio projects that is currently causing a sensation in the recording industry.

Of course, audioXpress also includes our regular contributions from Mike Klasco and Steve Tatarunis. This month they discuss “transparent” speakers, from flat panels to invisible transducers.