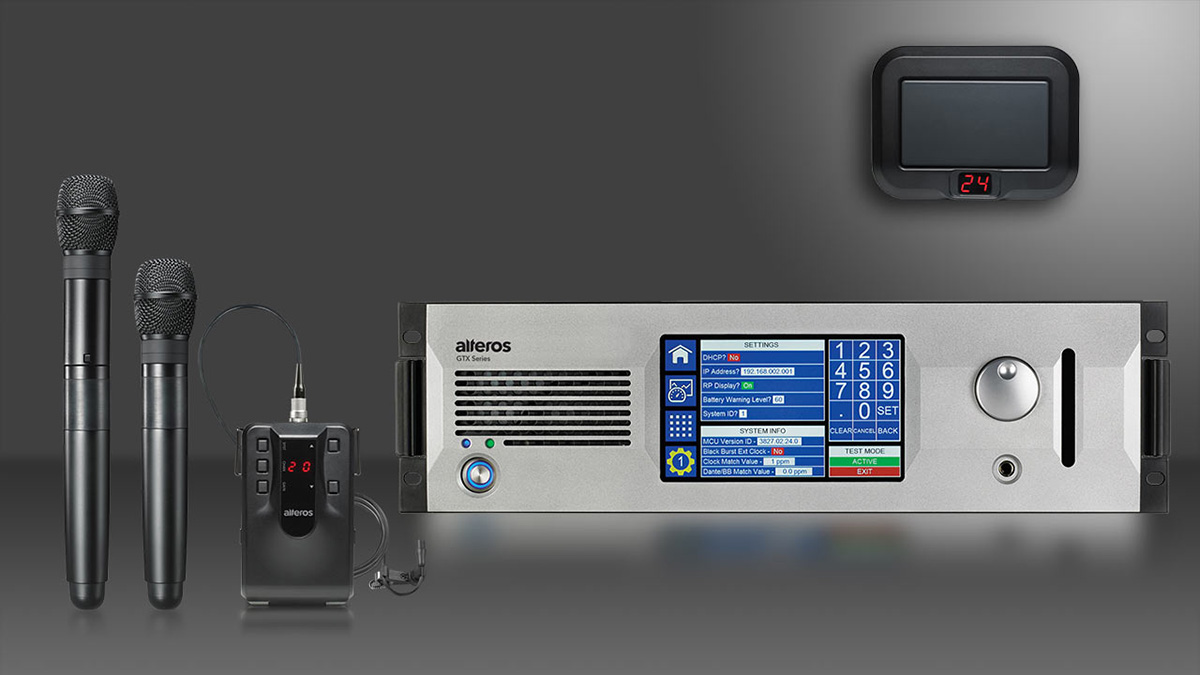 Introduced commercially in 2017, following seven years of dedicated research and development, the GTX Series L.A.W.N. UWB system offers immunity to radio frequency spectrum regulatory changes, bandwidth loss and channel crowding. The system is a fully digital 6.5 GHz solution that has proven to provide superior-quality, interference-free performance in even the most demanding live broadcast settings. The UWB technology uses pulsed RF rather than a modulated carrier signal. This enables easy setup of the L.A.W.N. without the need for frequency coordination, database registration, FCC part 74 licenses, or expensive support equipment.

Fitting seamlessly into modern workflows, the operationally cost-effective L.A.W.N. system supports unlimited repeat deployment (studio-to-studio and location-to-location) of 24 simultaneous, high-quality, low-latency (< 3ms), uncompanded 24-bit/48kHz audio channels in any indoor or outdoor broadcast or performance environment in a system that is easier to set up and operate than a computer Wi-Fi network. With up to 64-way diversity and direct digital delivery of audio, dropouts and other typical RF anomalies are virtually eliminated.

The Altero system offers several significant benefits. It operates far beyond the UHF and VHF television bands, requires no frequency coordination, license, database registration or STA, and does not cause interference or create intermodulation products. The system is ideal for studio-to-studio operation since it emits less intentional radiation than the typical PC and will not interfere with surrounding signals.

The GTX3224 simultaneously supports up to 24 channels, an additional 24 channels of talkback audio, and eight group assignment channels in just 3U of rack space. The unit features MADI, Dante and AES67 digital outputs that are all available simultaneously and allow for seamless integration with IP-based infrastructures. Fiber outputs support long-distance runs. The 7-inch front-panel touchscreen provides access to system settings, monitoring tools, performance reports and other controls.

The system’s sophisticated network and control platform makes it extremely simple to set up and operate this advanced professional wireless system. The GTX Series system’s powerful management software maximizes operational efficiency, enabling users to set up and confirm operation of 64 transceivers and 24 transmitters in only a few hours.

The GTX24-HHB also incorporates interchangeable microphone capsule mounts, allowing for maximum flexibility in sound and performance. Dual built-in antennae ensure signal strength is preserved regardless of where the microphone is held. Available now, the GTX24-HHP (performer) and GTX24-HHB (broadcast) handhelds round out the Alteros GTX L.A.W.N system, making this wireless microphone system the ultimate in performance and flexibility.

Alteros recently introduced the Direct-to-Fiber extension to the system. The new GTX3224F control unit doubles the number of GTX32 transceivers that can be connected to a L.A.W.N. system and provides a tenfold increase in the workable distance between transceivers and the control unit. Up to 24 GTX24 wireless microphone transmitters can work with a single 3U-high GTX3224F control unit at distances of up to two miles. The GTX3224F control unit replaces 16 of the 32 rear-panel Cat 5 transceiver ports found on the original GTX3224 with six fiber ports. Each fiber port can connect the control unit to a GTX-FX8 8-port fiber breakout node for a Cat 5 connection to up to 8 GTX32 transceivers. The result is that up to 64 transceivers can now be connected to a control unit (48 through the GTX-FX8 fiber breakout nodes and 16 directly via Cat 5 to the rear panel). The system can now cover extremely large venues, and multiple locations within a venue, as was proven with ESPN’s successful deployment of the Alteros Direct-to-Fiber GTX system for coverage of the 2018 US Open Tennis Championships.

Jackie Green, Alteros President and CTO, remarked “Modern facilities and systems are taking advantage of IP-based networking technology to reduce operational costs, simplify workflows, ensure the ultimate in production quality and even simplify equipment setup and operation. The GTX Series L.A.W.N. gives users the power, the performance and the simplicity of modernized workflows in a complete, intuitive high-performance package, along with the added benefits of operation outside of the increasingly crowded UHF spectrum, free from data-base registration, licensing and even RF coordination.”

To gain insight into the features and performance required for the quick and simple integration of the GTX Series L.A.W.N. into a facility or venue setup, the Alteros R&D team worked closely with key professionals in the live, touring and broadcast markets to identify their desired workflows, interfaces and functionality. The resulting Ethernet-based system allows setup, control, monitoring, naming, network and clock management in a sophisticated user interface that can be accessed directly or remotely on multiple device platforms. The GTX Series L.A.W.N. system allows 24 channels of wireless microphone operation to be deployed and operated with nearly “plug-and-play” ease (more simple than hooking up a computer and Wi-Fi).

“To take advantage of IP-based workflow efficiency, fiber infrastructure is being adopted in new and retrofitted production facility and event venue construction,” adds Jackie Green. The Alteros Direct-to-Fiber system communicates directly on such networks without conversion. While other manufacturers of wireless systems are beginning to deploy RF over fiber, those systems require converting the RF to fiber and back again. “Any time there is a conversion,” says Green, “the system suffers from possible jitter, resolution degradation, signal loss, increased latency, and generally negative effects on the sound quality. Our system is already natively digital, and we communicate directly without the need for conversion and the potential for negative conversion artifacts. Using our wireless microphone system over fiber will result in sound quality at the system output that is superior to RF over fiber and even over direct-wire analog.”
www.alteros.tech
related items