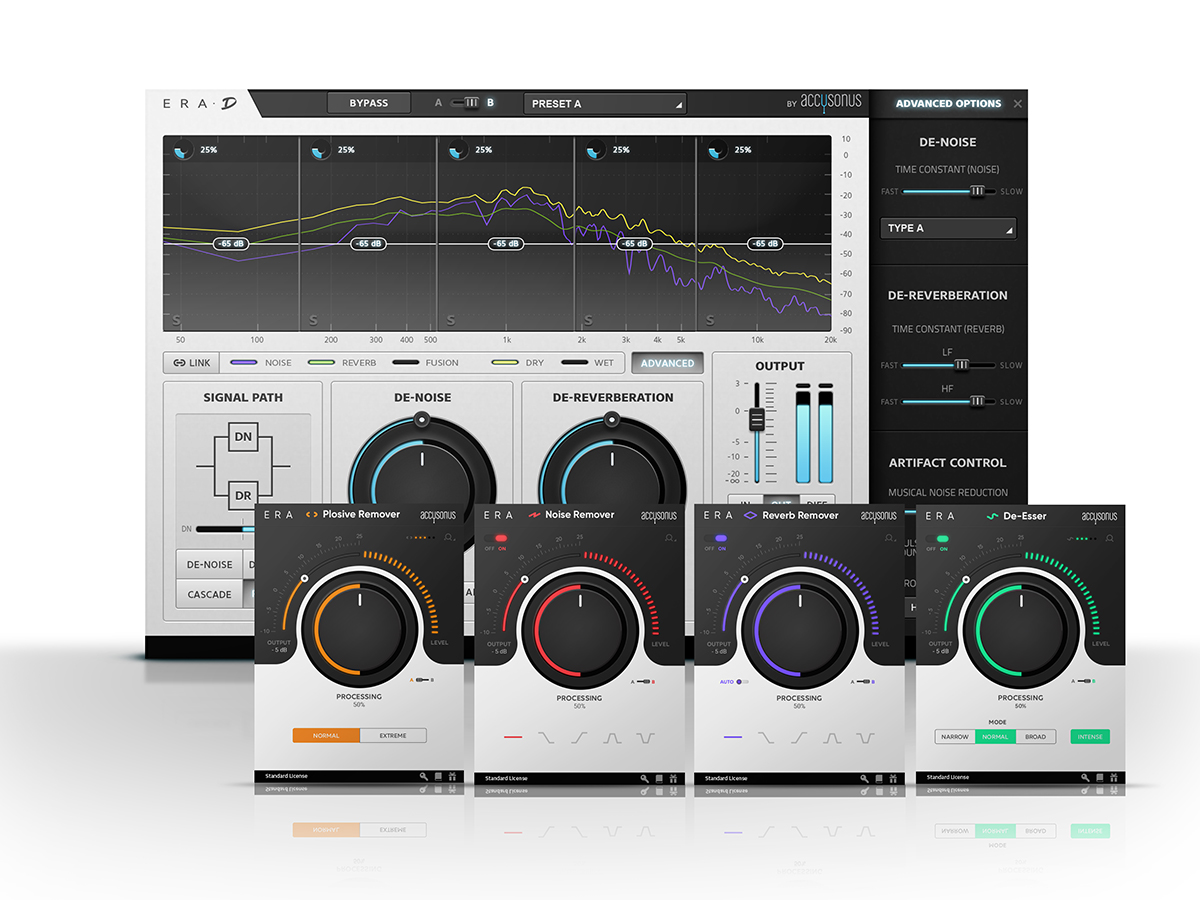 Accusonus is described in its website as an audio technology company that develops human friendly software tools based on artificial intelligence. We don't actually know if by "artificial intelligence" they are proposing some kind of sophisticated cloud processing that occurs in super-computers, demanding a high level of resources to analyze the audio signal and return exactly the intended result - but the company's new ERA-Bundle, proposes to apply that same kind of sophisticated audio analysis and corrective processing, in real time, on the host computer (Mac or PC), using just "one-knob" to define how much correction is actually needed, and a toggle switch to compare the results before and after.

We've seen this approach used before in plug-ins from other software companies, mainly intended to promote the company's algorithms in simple software tools that were designed for simple insert on a multichannel mix, or to be used as giveaways on promotional campaigns intended to get people registering online (email baits). After all, any serious user DAW knows that to get the best possible results you need to balance different types of processing, sometimes acting on selected frequency bands, or using sophisticated perceptual processing with time domain analysis and an automation curve to detect the correct levels, masking effects, etc. Many times, the interface gets so overly complex that users end up dialing obscure parameters, which don't actually help to understand how the algorithm affects the results.

None of that, says Accusonus, a company based in Massachusetts (USA) and in Athens/Patras Greece. When the tool is actually "intelligent," users just need to dial in more or less processing to get the intended audio repair in real time. Accusonus calls this software collection The Enhancement and Repair of Audio (ERA) Bundle, combining single-knob audio repair plugins that offer both fast and high-quality processing. Included in the bundle are four basic types of processors, plus a combination tool:
- ERA Noise Remover, to easily reduce or completely remove unwanted fans, air-conditioners, electric hum & hiss or any other background noise.
- ERA Reverb Remover, to quickly reduce excessive reverb and bring the main sound into focus.
- ERA De-Esser. to smooth out audio problems caused by excessive sibilance consonants (such as "s", "z", "ch", "j" and "sh").
- ERA Plosive Remover, to instantly fix unnatural plosive thumps, such as "p", "t" and "b".
- ERA-D, focusing on just 2 things. Sophisticated denoise and dereverb processing, combined (part of the Pro level bundle only)

Until now, Accusonus' credentials include mainly music production oriented software, such as drumatom, Regroover and Beatformer. With this ERA bundle, the company jumps to the front with a collection of multi-patented audio repair plugins that are both surprisingly user-friendly but are also extremely sophisticated. 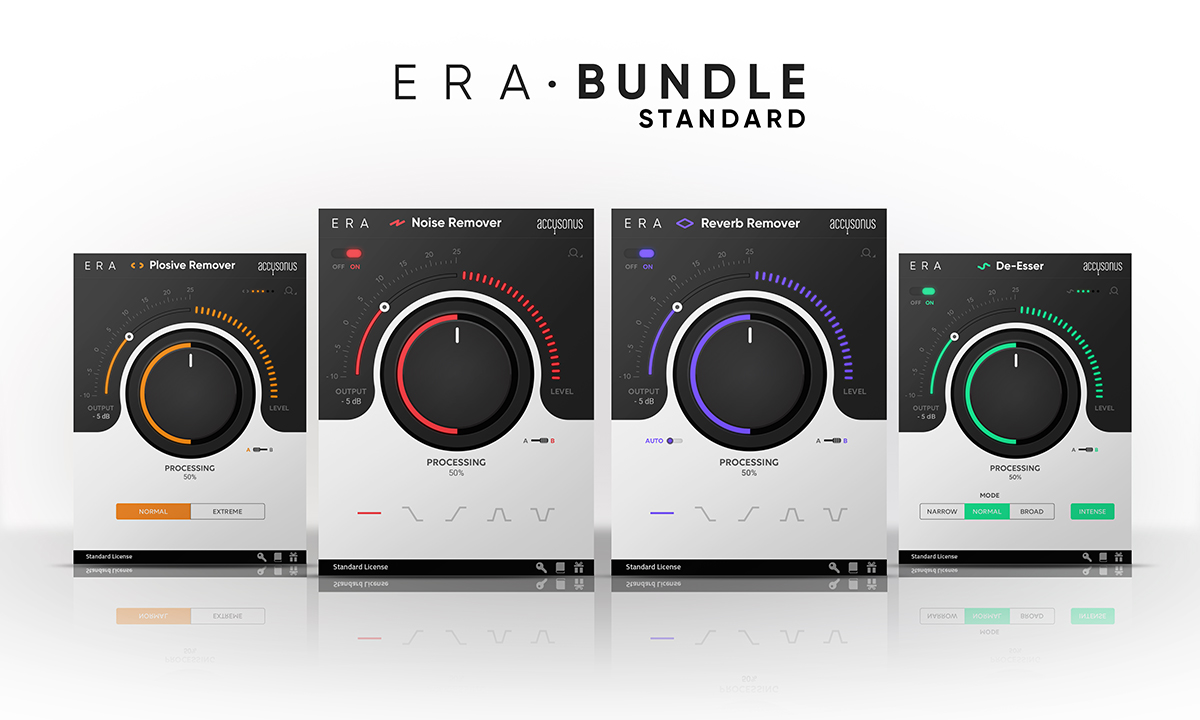 As the company explains, "We think that audio repair should be fast, simple and accessible to everyone. We believe that computers are ideal tools for jamming, inspiring and creating the sound of the future. We develop our own patented Machine Learning and Artificial Intelligence technology in order to enable previously unimaginable sound processing workflows."

The company previously marketed two simple audio repair plug-ins, the ERA Noise Remover (ERA-N) and Reverb Remover (ERA-R) plugins, which were highly praised in reviews. The updated ERA Product Line improves the user experience, including an auto-gain function for ERA Reverb Remover and a vector-based and Retina-ready UI with 3 zoom levels. In addition, ERA-D, the joint de-noise and de-reverberation plugin for post-production professionals is also updated, offering unique features such as the dual microphone workflow and spectral band processing.

“The importance of audio content is increasing and we are committed to make our audio repair tools fast, simple and accessible to everyone,” says Alex Tsilfidis, CEO of accusonus. “With this new release, we are harnessing the power of modern algorithms to create products that can achieve exceptional results in a fraction of the time."

The ERA Bundle Standard (including Noise Remover, Reverb Remover, De-Esser, and Plosive Remover) is available for $99, and the ERA Bundle Pro (Noise Remover, Reverb Remover, De-Esser, Plosive Remover, and ERA-D) sells for $299. Those are introduction prices which will increase after July 31, 2018. All plug-ins are available for macOS 10.9 or later in AU, VST, and AAX Native (64-bit) formats, or Windows 7 (SP1) or later, in VST, and AAX Native (64-bit) formats. The ERA Bundle is supported by most popular DAWs and non-linear editors.

If anyone thinks this is too good to be true, there's always a free, fully functional 14-day trial version to experiment with.
https://accusonus.com/products/audio-repair/era-bundle-standard
related items