According to Yamaha, the RSio64-D provides significantly enhanced flexibility for sound systems that include a Dante audio network, including the new compact TF-Series consoles introduced at ProLight+Sound 2015. As Yamaha has demonstrated in that event, the RSio64-D will be a crucial component in the integration and expansion of all Yamaha digital mixing systems.

Featuring four card slots, the RSio64-D I/O Rack is compatible with more than 30 different Yamaha Mini-YGDAI cards, allowing a wide range of input/output formats, like AES/EBU or ADAT, to be connected to a Dante network. But it is not just limited to I/O cards - it also accepts processing cards that provide capabilities such as Lake processing and Dan Dugan automatic mixing.

Each Mini-YGDAI slot includes a sample rate converter (SRC) so that devices operating on different word clocks can be connected without causing noise or signal interruptions. Full support for Dante network redundancy (primary/secondary) is provided, as well as an EXT DC INPUT for a redundant power supply.

To make the RSio64-D even more convenient and easy to use as a format converter and router, presets for seven basic routing patterns are built in, including routing between Mini-YGDAI cards. A rotary switch on the front panel allows direct selection of one-to-one Dante/Mini-YGDAI routing, branched Mini-YGDAI/Mini-YGDAI routing, and other options designed to suit a variety of applications. 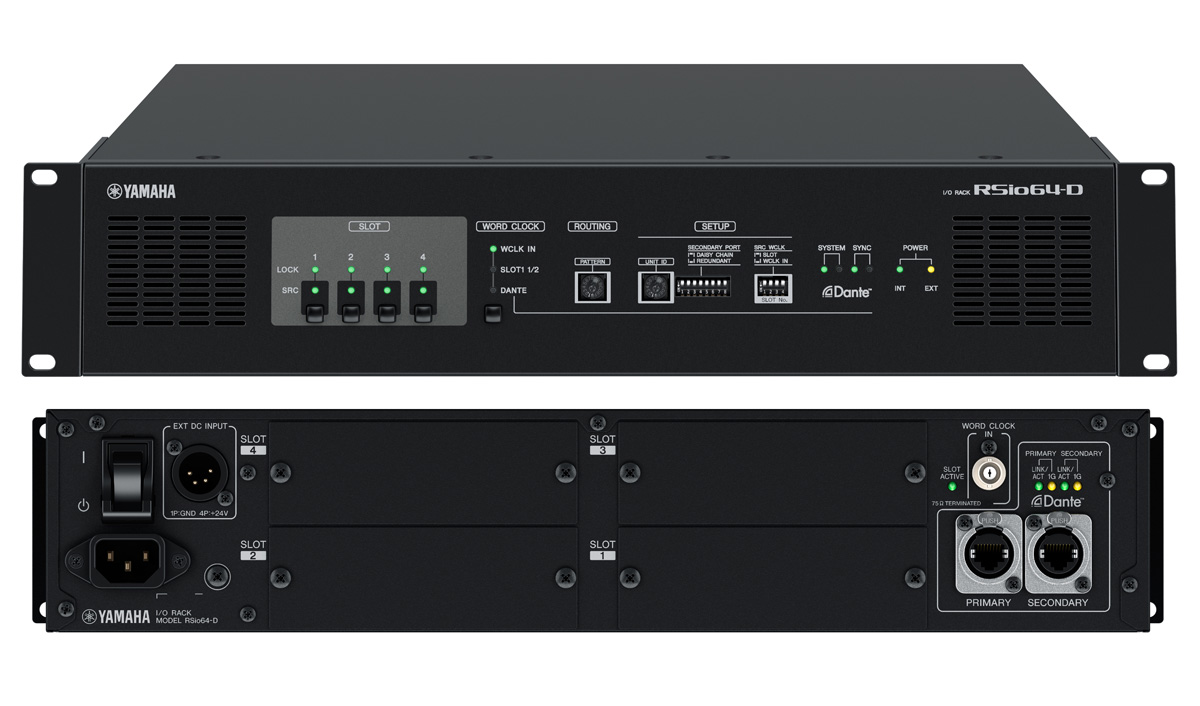 The RSio64-D can also be remotely controlled from Yamaha CL and QL series digital mixing consoles or Yamaha’s R Remote software application, with full matrix patching supported so that more complex routing can be set up as required.

“Since its introduction in 1998, the Mini-YGDAI format has evolved to encompass a broad range of host devices and cards, with many of our users investing in such equipment,” says Ken Hiraoka, Yamaha PA department manager. “The RSio64-D is an innovative solution that not only makes it possible to utilize that investment on a Dante network, but also enables convenient routing between Mini-YGDAI cards.

“We expect that the RSio64-D will greatly expand the utility and power of sound systems built around Dante capable products such as the CL and QL series consoles, extending their usefulness across a wider spectrum of applications.”

Shipping of the unit is scheduled to begin in summer 2015.
www.yamahaproaudio.com
related items