Famous German synthesizer developer Waldorf announced availability of the Streichfett String Synthesizer, part of a newly develop series of synth module. This little modern wonder brings back the glorious string synths of the Seventies and early-Eighties, with today’s technology.
Having opened many eyes and ears when being premiered back in March at Musikmesse 2014 in Frankfurt, Germany, the Streichfett String Synthesizer successfully brings back to life the extinct string synthesizer sounds of yesteryear with a modern-day musical twist. 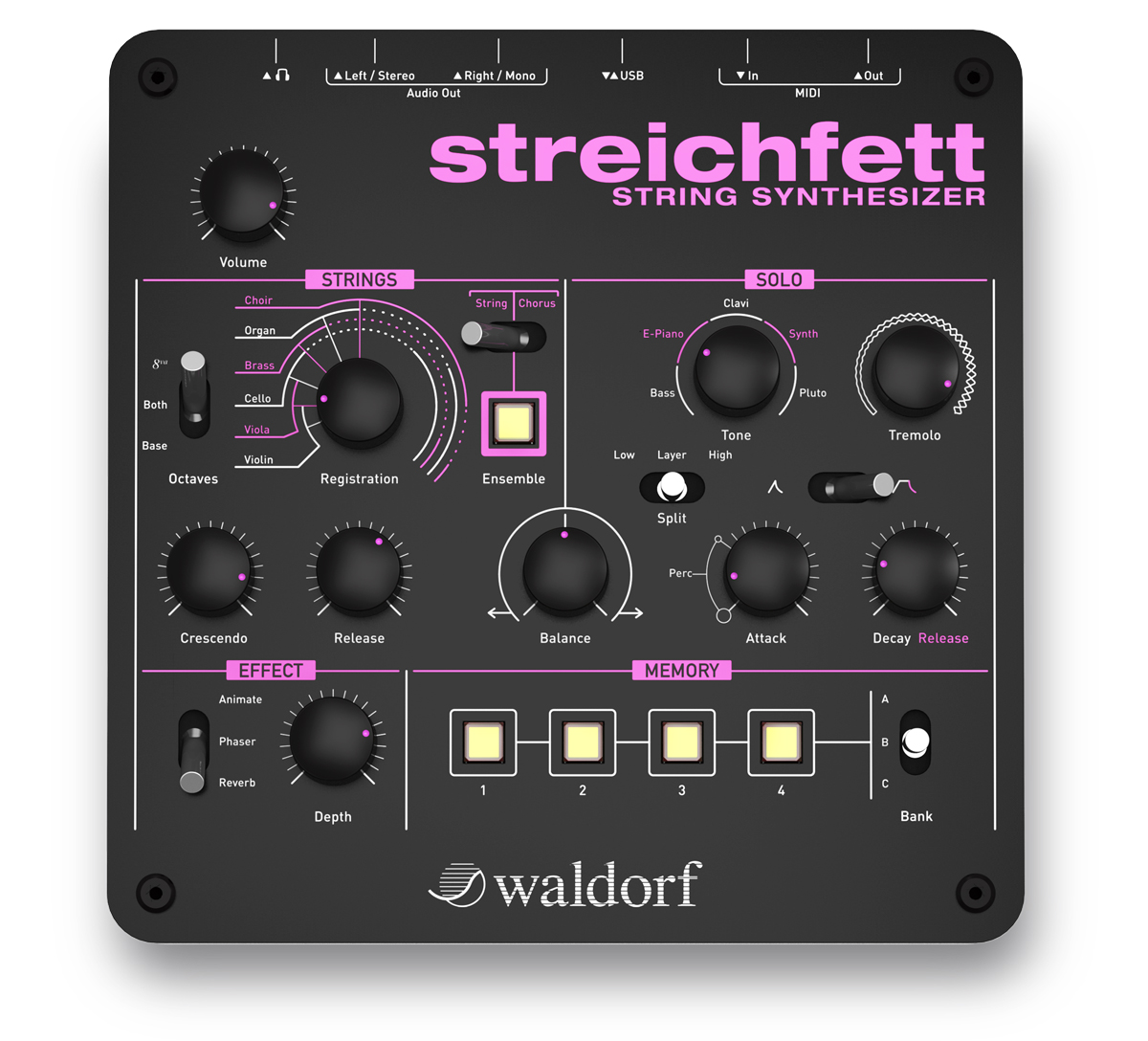 Back in the Seventies and early-Eighties, keyboard players wishing to create (not necessarily authentic-sounding) string sections often turned to so-called string machines making use of top octave divider technology to produce polyphonic pitching for each key played. Popular in their heyday, these distinctive-sounding string synths can be heard all over classic recordings by both electronic music innovators, prog rockers, and pop acts of the time — think French synth showman Jean-Michel Jarre’s multi- million-copy-selling Oxygene, or even adult movies of a similar vintage — think German synthmeister Klaus Schulze’s soundtrack to Bodylove, but died a death when more authentic-sounding sampling technology took hold. However, now Waldorf has successfully brought back to life those extinct string synthesizer sounds of yesteryear with a modern-day musical twist thanks to the Streichfett String Synthesizer, a colorful desktop module that surely stands out far from the musical crowd!

Who better qualified, then, to touch upon the whys and wherefores of string machine revival (with a cultural culinary knowing nod and a wink) than Waldorf Music CTO Stefan Stenzel: “We had a string machine in our office, and, although it was malfunctioning, we enjoyed playing it. Everything sounded like it could serve as a soundtrack to an Eighties ‘sensual’ movie! We thought it would be fun to create something similar, so we listened to many different string machines to figure out the sweet spots of each individual machine. Quickly the name ‘Streichfett’ stuck, and we decided to revive the extinct species of string synthesizers.”

As such, Streichfett brings the distinctive string synth sounds of those now-much-missed machines to today’s discerning musicians by cleverly combining the best of yesteryear’s classics with today’s technological advances — all neatly squeezed into an attractive compact and cost-effective package with everything to play for. Its dual sound engine features a 128-voice polyphonic STRINGS section (with Choir, Organ, Brass, Cello, Viola, and Violin presets) and an eight-voice polyphonic SOLO section (with shimmering-sounding, slightly percussive Bass, E-Piano, Clavi, Synth, and Pluto presets that blend well with the STRINGS section) — essential for creating those velvety smooth sounds with high-fat content! Essential, even, for creating ‘vintage’ adult movie soundtracks — Parental Advisory Explicit Lyrics optional! The Ensemble effect handles lubrication of the STRINGS section while the EFFECT section adds adjustable Phaser or Reverb. Alternatively, the EFFECT section can be used to Animate the STRINGS register, resulting in spectacular sound morphing effects.

While those presets bear little resemblance to their real-world instrument namesakes, that’s not the point here. Just like yesteryear’s classic string synthesizers, Streichfett delivers distinctively rich and creamy pads unobtainable on any modern-day instrument and succeeds in doing so with a simple and easy to comprehend user interface that belies the somewhat complex sound engine that lies beneath. But despite being blessed with relatively few controls, quite an array of sounds can quickly be dialled in, so it’s just as well that Streichfett can store 12 user-programmed patches in its MEMORY. More reasons to be cheerful and take it on stage, surely?

Streichfett’s robust, roadworthy casing matches the cheerfully-coloured Rocket Synthesizer and 2-Pole Analog Filter siblings, and, of course, comes complete with MIDI In and MIDI Out plus USB connectivity for equally easy integration into any modern-day DAW- based recording setup. Left/Stereo and Right/Mono Audio Out and a headphone output ensure that the outside world can clearly hear its distinctive sounds in all their ear-opening glory.

Streichfett is available to purchase worldwide with an SRP of €279.00 EUR (including tax).
www.waldorf-music.info/streichfett-overview

About Waldorf
The Waldorf name has been synonymous with high-quality synthesizers for 25 years; indeed, its innovative position in the electronic musical instruments marketplace dates back to 1989 with the release of the wavetable synthesis-based Microwave. This extraordinary reincarnation of the legendary PPG Wave series — arguably amongst the most coveted high-end synthesizers of the early Eighties — was instrumental in bringing the dominance of Japanese and American synthesizers to an end. Waldorf continued this unique technology tradition with successive synthesizer releases ranging from the mighty Wave — perhaps the most impressive, expressive, and user-friendly sound synthesis tool ever built — to raising the bar for virtual analogue synthesizers with the introduction of the popular Q series from 1999 onwards.The new Millennium saw the forward-looking company making a timely move into the brave new world of music software with the release of its first VST Instrument, PPG Wave 2.V — still available today as part of the Waldorf Edition plug-in suite alongside several more recent software releases like Largo and PPG Wave 3.V (soft synths) and Lector (vocoder). Meanwhile, subsequent successes in the high-quality hardware arena include the Blofeld synthesizer — forging sound and design into an unbeatable price/performance ratio in both desktop and keyboard versions — and Zarenbourg, a contemporary electric piano par excellence. 2013 (and beyond) sees a slew of new high-quality synthesizers set to take the Waldorf name to the hands-on musical masses, starting with the cost-conscious Rocket and its associated Rocket Control free iOS assistant app for iPad. Coming full circle, Waldorf broadened its appeal further still by introducing Nave to transform any iPad into an advanced wavetable synthesizer!
related items