Now, with the new StudioLive CS18AI mix controller, PreSonus is able to offer a complete networked solution, centered around this new modular control surface which can be integrated with the relatively new PreSonus StudioLive RM-series rack-mount mixers or can simply expand mixing abilities with PreSonus' Active Integration digital mixers. The most important application, either live or in the studio, will be the integration of all those systems with PreSonus’ DAW solution, Studio One.

Networking with StudioLive RM32AI and RM16AI mixers via AVB Ethernet and PreSonus UCNET technology, the StudioLive CS18AI offers touch-sensitive motorized faders and enables complete hardware control of all mixer features, managing up to 64 channels. The new controller also makes it even easier to do virtual soundcheck, live recording, and studio mixdown with the Studio One DAW and Capture recording software. 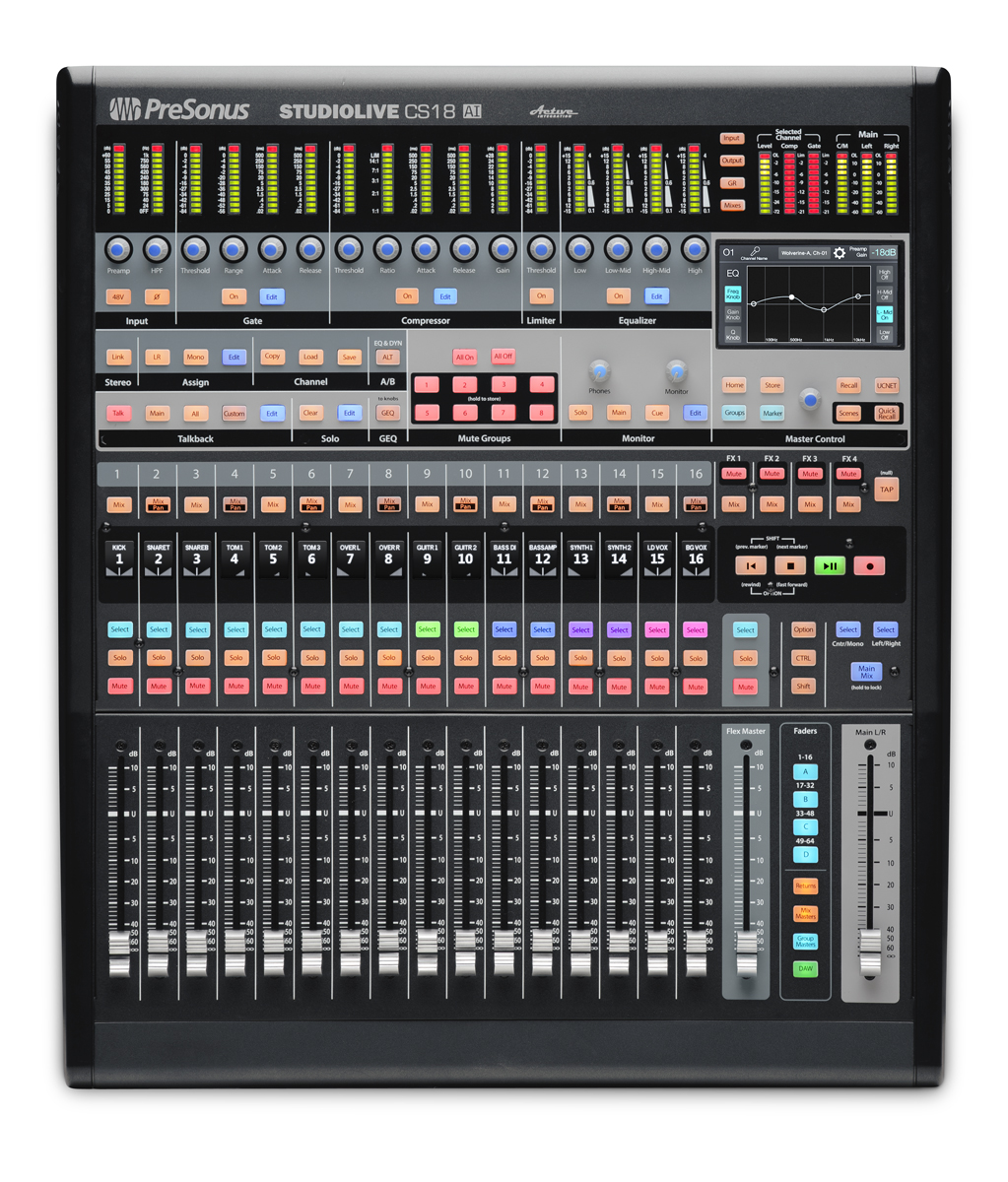 “The StudioLive CS18AI is the next logical step as we continue expanding our modular networked mixing systems,” remarkes PreSonus Senior Product Manager Ray Tantzen. “Our StudioLive Active Integration mixing systems are the only solutions that allow you to customize your mixing experience to fit your individual needs. With a StudioLive RM as the mix core, you can choose to work with physical motorized faders, portable wireless iPad, a large Windows 8 touch screen, or a combination of them all.”

The 19", rack-mountable StudioLive CS18AI has the same footprint as a StudioLive 16.4.2AI console and can control up to 64 input channels (with two cascaded StudioLive RM-series mixers) and the mixer’s Fat Channel processing section. An RGB Channel Select button makes it easy to identify and switch between channels.

Because the StudioLive CS18AI’s motorized faders are touch-sensitive, we don’t have to move the fader for it to recognize it’s being touched, and we can view the fader value without changing it. When used with Studio One, this enables to write automation using touch-and-latch methods that “know” when you touch and release a fader.

The StudioLive CS18AI can be used concurrently with PreSonus UC Surface control software for Mac, Windows, and iPad and QMix-AI personal monitor control software for iPhone/iPod touch, in order to control StudioLive RM mixer with multiple devices simultaneously. UC Surface integrates directly with the CS18AI as an extension to the physical controller, providing complementary views for the selected channel strip, full metering, and scene recalls.
In addition to handling control data, the StudioLive CS18AI’s AVB Ethernet connection makes it possible to include two microphone inputs with recallable XMAX preamps and two balanced TRS line inputs, enabling the CS18AI to handle talkback, room mic, and other local inputs, such as 2-track playback. There are also two channels of digital returns from the RM mixer that can carry signals from the solo bus, main mix, or any aux mixes to feed the two balanced TRS monitor and headphone outputs. 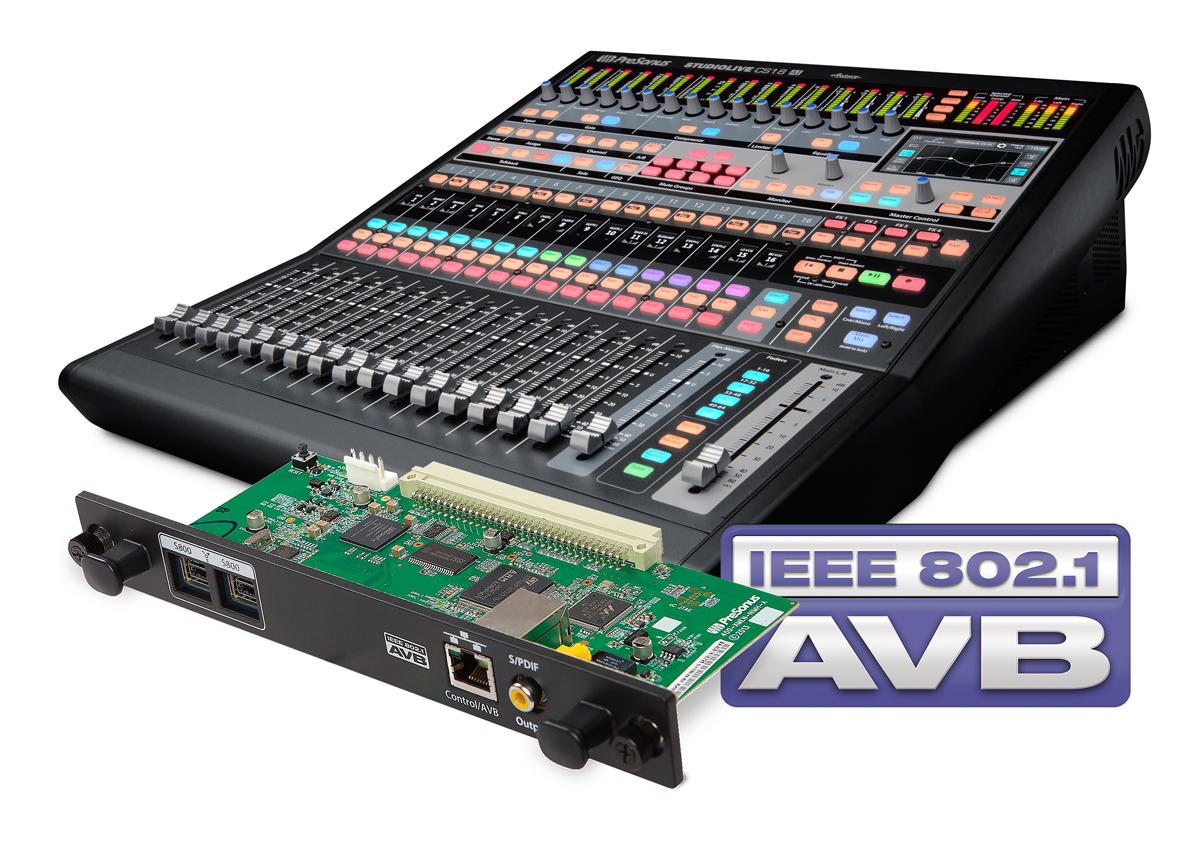 With this first phase of AVB support, PreSonus enabled the use of the StudioLive RM32AI or RM16AI units as a stage box and monitor mixer for any StudioLive AI-series front-of-house (FOH) console mixer. With PreSonus’ Active Integration technology, the mixers on the AVB system can be set up, and all mixing workflows can be synchronized, in a single step. All input routing to and from the onstage RM mixer and the AI console mixer at FOH is configured automatically.

“This is just the beginning of PreSonus AVB networking,” commented Ray Tantzen, Senior Product Manager for PreSonus. “We have big plans to unleash the true power of a networked audio system. Our implementation of AVB will continue to grow, supporting more workflows and more devices from PreSonus and other manufacturers. With more manufacturers getting onboard with AVB, we are very excited about the future.”