Like many technology companies in Silicon Valley, OPPO Digital is continuously working on bringing new ideas and new products to customers. Over the past 8 years, OPPO has developed and released a series of award-winning universal DVD and Blu-ray players. But just as video has entered the Ultra HD era, OPPO Digital acknowledges audio is evolving with the rise of high-resolution music and a renewed interest in personal audio. Aiming at demanding customers in the personal audio space OPPO has announced the new PM-1 Planar Magnetic Headphone and HA-1 Headphone Amplifier. The PM-1's became available middle April and the HA-1 one month later.
Shipping since May 7, 2014 for $1,199, the new HA-1 Headphone Amplifier from OPPO Digital was initialy announced together with the outstanding PM-1 Planar Magnetic Headphones already available since middle April 2014. The HA-1 Headphone Amplifier builds upon the success of the BDP-95 and BPD-105 universal Blu-ray Disc players, lauded for their DAC and analog output stage. The HA-1 combines an uncompromising Class-A balanced power amplifier section with the performance of the ESS 9018 Sabre32 Reference DAC, especially suitable for high-resolution digital audio. Its digital inputs include coaxial, optical, balanced AES/EBU, and the asynchronous USB DAC with support for both PCM and DSD formats – up to 384 kHz 32-bit resolution and DSD audio up to 256x the CD sample rate. The HA-1 is also a stereo pre-amplifier and a Bluetooth audio transport, compatible with Apple’s iPod, iPhone and iPad, apart from supporting the aptX CODEC for other mobile devices. 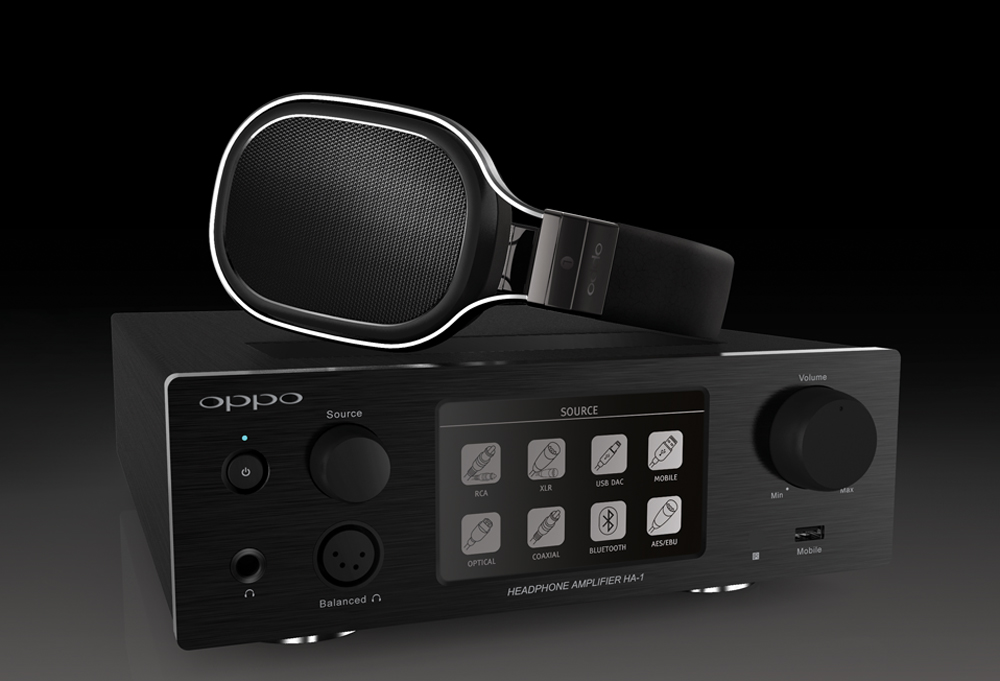 The analog audio section of the HA-1 is a fully balanced design with an emphasis on keeping the audio signal in the analog domain once it leaves the DAC. The HA-1 is anchored by a beefy toroidal power transformer, linear power regulators and filters with custom made capacitors. A motor-driven precision volume control knob enables both hand adjustment and remote control while keeping the audio in a pure analog audio path. Line level analog inputs and outputs are provided with both RCA and balanced XLR sockets. A 4.3-inch screen, displaying a classic VU meter, a modern spectrum display, or detailed technical information about the audio signal, aids the familiar volume and source selection knobs. A supplied IR remote and the OPPO Remote Control app provide complete control. AudioXpress was among the first publications to have access to both the PM-1s and the HA-1 amplifier and we have an indepth review in the magazine. Coming soon.
http://www.oppodigital.com/headphone-amplifier-ha-1/
related items