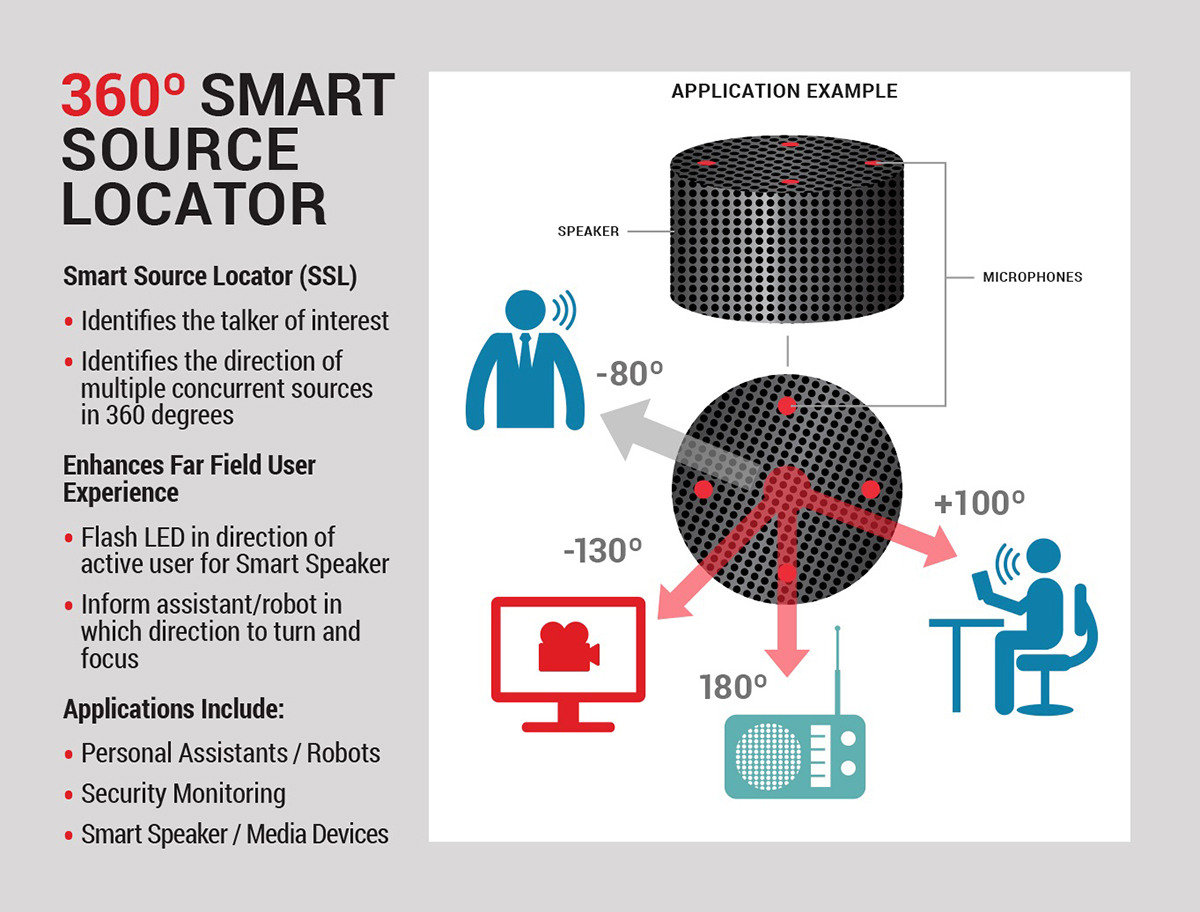 The new solution was introduced by Conexant Systems at CES 2016 to highlight their AudioSmart product line. These highly efficient, powerful silicon and software solutions enhance the audio experience for a range of consumer electronics and Smart Home applications.

“Make lunch reservations and cancel my afternoon meetings.” While some of us may have the luxury of a personal assistant, most of us aren’t so lucky. However, an emerging category of devices - smart personal assistants - are here to help. By identifying the location from which you are talking, smart speakers and robots can bring a new level of interactivity to personal assistant duties. But, in order to make this new category of smart devices truly effective, new technology is required.

With Conexant’s SSL, which is part of the company’s innovative AudioSmart voice and speech processing software, a user’s location can be detected from any angle around the device. This 360-degree functionality is enabled by support of 4 microphone voice processing. This contributes to a greatly enhanced user experience and lays the foundation for even better speech recognition performance - including the ability to isolate the target voice from among competing voices and sounds in the room.

For example, with Conexant technology inside, smart personal assistants or robots can filter out background noise and automatically turn to face the user that is speaking - no matter where the voice is coming from in the room.
As part of Conexant’s Contextual Awareness product portfolio, SSL also gives end applications the ability to “listen” to the surrounding environment and intelligently adapt. Conexant has leveraged its AudioSmart input and playback processing algorithms to create a suite of technologies that sense the context of the product and its surroundings to automatically optimize the end-user experience.

“Not only do we offer the industry’s best voice processing solution, we are the only company that can provide all of these features in the far-field range,” says Saleel Awsare, Conexant senior vice president and general manager. “Conexant’s audio solutions allow people to control everything from their tablets to home appliances using only their voice, and the CX20924 takes this to the next level by adding environmental cues and directional awareness into the mix.”

The new chip is part of Conexant’s AudioSmart solutions and offers a highly accurate, robust way to control smart speakers, robots, security monitoring cameras, and more. With an industry-leading, low-power, small footprint speech recognition engine running within the chip, the CX20924 can always be listening for a wake-up voice command while the rest of the device is powered off. The CX20924 executes this “always-listening” mode in an ultra low-power state. The ability to do this, combined with echo cancellation that allows users to talk to the device from anywhere in the room, within five meters, is what differentiates Conexant’s approach.

AudioSmart CX20924 EVKs will be available to qualified customers and partners beginning in Q1 for $500. Pricing starts at $6.21 each in 100K quantities.
www.conexant.com
related items