During the 137th AES Convention in Los Angeles, NUGEN Audio is introducing MasterCheck, a loudness tool specifically designed for music production using the new loudness normalization and true-peak limiting techniques that streaming services now require. Also featured will be version 2 of Visualizer with many highly-requested user interface features and the latest techniques for comparative audio analysis and usability.
At the 2014 AES Convention in Los Angeles, NUGEN Audio is celebrating a decade of service to the music and audio post-production communities by introducing MasterCheck, an audio plug-in that empowers producers to create music in the new audio paradigm of loudness normalization in music streaming. In addition, NUGEN Audio is featuring version 2 of Visualizer, the latest incarnation of the company's industry-leading audio analysis and real-time comparison toolset.

“Over the past 10 years, NUGEN Audio has become the recognized leader in loudness technology — and now we’re pleased to introduce the world’s first loudness tool specifically designed for the music producer,” says Jon Schorah, founder and creative director, NUGEN Audio. “Streaming services such as iTunes Radio, Spotify, and DAB Radio are now using loudness normalization and true-peak limiting techniques. We designed MasterCheck to empower producers to mix audio to the new criteria and understand not only how algorithms from the major streaming platforms will affect the mix, but how the music will sound on consumer playout devices for the optimal listening experience.”

MasterCheck is an audio plug-in for professional recording systems such as Avid Pro Tools, Steinberg Cubase, or Ableton Live. Ideal for every aspect of music production including recording, mixing, mastering, compilation, archive, and restoration, MasterCheck is also very useful for producing podcasts at optimal loudness levels for dialog clarity and the listener environment.

With MasterCheck, audio engineers can apply loudness matching and dynamic content analysis, using techniques such as peak-to-loudness ratio (PLR), to compare their audio output with existing productions. The advanced side-chain loudness matching can also be used to audition signal paths without the “improvement” of increased loudness to understand precisely how various effects such as compression can change the sound with no influence from the loudness enhancement.

In this manner, MasterCheck empowers professionals to re-gain control over the playout environment by providing a precise understanding of how their tracks will sound during streaming.

Also on display at the 2014 AES Convention is Visualizer version 2, the latest update of NUGEN Audio’s audio analysis suite designed for high-end music professionals. Ideal for music mixing and mastering as well as audio post-production, Visualizer provides comprehensive audio analysis for recording, mixing, and mastering in a single plug-in. The standardized reference set of professional tools is designed to help audio engineers work faster, avoid mistakes, repeat past successes, and understand the success of others.

Based on customer feedback, this major update to Visualizer features numerous user interface enhancements including a fully resizable interface, a multiview feature that enables engineers to compare multiple sources using a single plug-in, and a difference view showing the difference between two input signals. In addition, Visualizer is now available in a version supporting Avid Pro Tools | HDX, as well as a stand-alone version.

“Incorporating many highly requested user interface features and the latest techniques for comparative audio analysis and usability, Visualizer version 2 demonstrates our ongoing commitment to the thousands of existing Visualizer users as well as the Avid community. In fact, it is our first Pro Tools | HDX plug-in,” Schorah says. “Through more flexible use of display real estate and more robust diagnostic power, Visualizer is now the most powerful single analysis tool on the market. Engineers can access precisely the information they need, when they need it, and with no unnecessary clutter.” 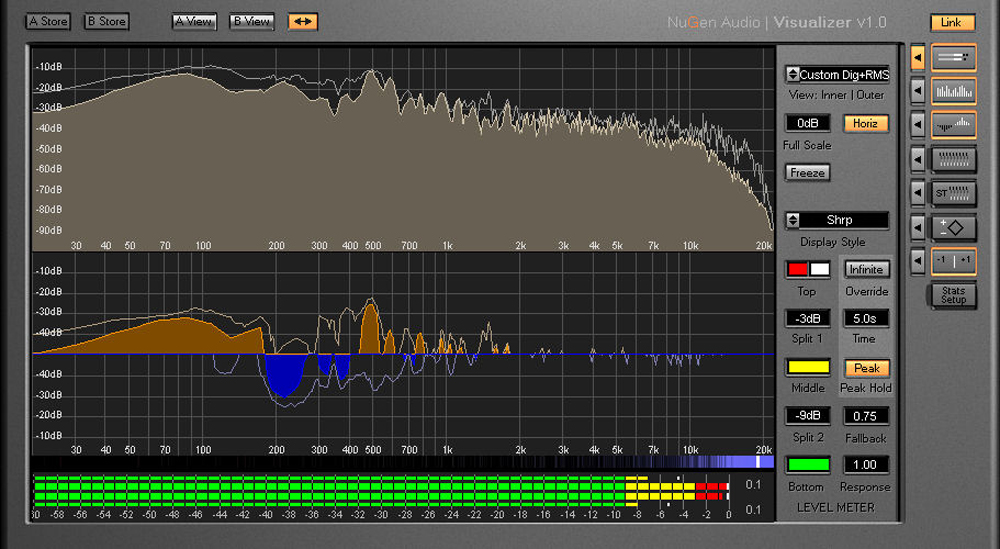 MasterCheck will be available in October at a suggested retail price of $129. Also in October, users will be able to download a beta version of the new Visualizer, with the full release scheduled for later this year. In celebration of 10 years of business, NUGEN Audio is offering a buy-one, get-one free offer for the month of October on all plug-ins.

At AES137, NUGEN Audio will also preview a new upmix process specifically designed for Stereo to 5.1/7.1/9.1 upmixing in film and TV production. Capable of producing a downmix-compatible upmix with optional dialog isolation in the center channel, the new NUGEN technology is projected to be available in early 2015.
www.nugenaudio.com
related items