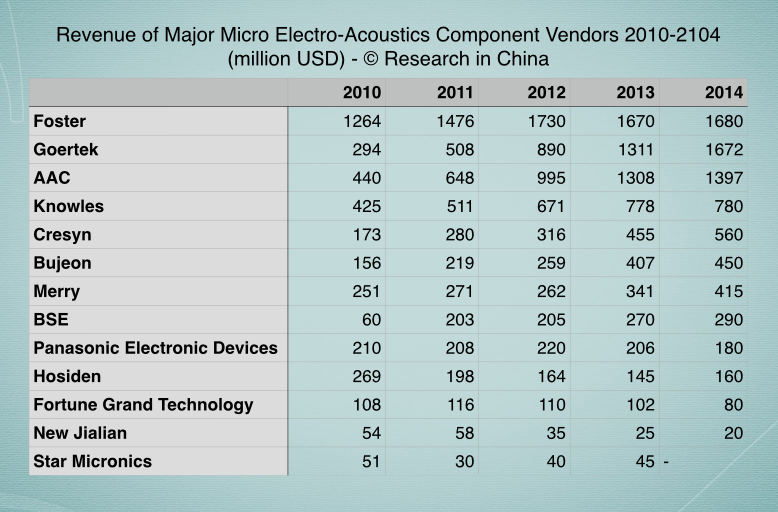 “The industry leader AAC has accidentally suffered downdrafts entering 2014 for several reasons: it is impossible for the mobile phone market including the smartphone market to reproduce high growth, and China’s smartphone market shows signs of decline,” says the report. According to data released by China Academy of Telecommunication Research of MIIT, the domestic mobile phone market accumulated shipments of 293 million units in January-August 2014, down 24% as opposed to 396 million units a year earlier, including 254 million smartphones (down 11.3% year-on-year).

The tablet PC market apparently stopped growing with a registered slowdown in iPad shipments, in contrast to the slightly improved laptop computer market.

On the other hand, the micro electronic-acoustics industry amid intensified competition has created space for generous profits in the transfer process from manual to automatic, and players have now completed the layout of automatic production lines, leading to non-existence of potential for cost reduction.

Nowadays, mobile phone competition focuses on thickness, CPU, screen and camera, less concerned about sound performance, whose improvements depend on earphone rather than the phone itself, thus vendors prefer to adopt cheap electro-acoustic components.

In the field of microelectromechanical system (MEMS) microphone, large MEMS foundries or IDMs provide cheap MEMS dies which causes a drastic drop in MEMS microphone prices. The fierce price war has brought a rare loss for Knowles, not to mention other companies.

Mobile phone audio frequency applications are developing towards integration, with the speakers/receivers firstly integrated into speaker modules, then box, and now equipped with LDS antennas. Then the microphones are mounted on FPC which enables flexibility for addition of multiple FPCs to mobile phones, simplifies circuit board design, improves stability and reduces thickness. All audio frequency components in a mobile phone may be integrated into a module in the future to bring the price down.

Micro electro-acoustic vendors have intensified efforts to develop non-electro-acoustic products to compensate for the decline in performance, but the huge initial investment is a burden to the overall gross margin. As the only highlight in electro-acoustics is the headphone category. Even those priced above USD100 won the broad market following the popularity of expensive phones such as iPhone, so did China’s bluetooth headphone in the wake of booming auto sales.