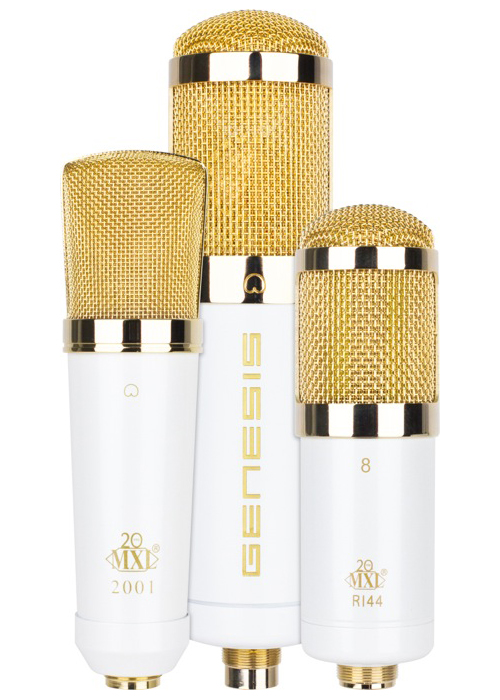 The Summer NAMM show marked the official release of the microphones, which were the centerpiece of MXL’s booth in Nashville, TN. “This year is a milestone for MXL, and we wanted to do something special,” says MXL Director of Sales and Marketing Perry Goldstein.

“We picked three microphones that have been significant in our company history to offer in special edition gold and white. They celebrate how far we’ve come in the last 20 years, and they’re something really unique we can offer to our customers. These microphones are just gorgeous and they have the sound to match.”

The 2001 SE is a large diaphragm condenser microphone with an field-effect transistor (FET) preamp with transformer‐balanced output. It has a rich midrange and a detailed top end—perfect for vocals but also excels on acoustic guitars.

The Genesis SE is the special edition version of MXL’s flagship tube microphone. It boasts a vintage Mullard 12AT7 tube that gives it a classic tonality, great as a vocal mic that cuts through the mix.

The R144 SE is a ribbon microphone with a rich midrange and rolled‐off top end. It has a figure‐8 polar pattern and a high sound pressure level (SPL) capability, making it ideal for horns and electric guitars. The tone is mellow and natural.