According to Jensen’s General Manager Dave Hill: “For over 40 years, Jensen has gained the reputation for offering the very highest quality transformers - both in terms of low distortion and noise elimination. And although Jensen transformer-equipped direct boxes are available from others, we felt that the time was right for us to expand our ISO-MAX range by offering some designs that follow both Deane Jensen’s and Bill Whitlock’s commitment to achieving the very highest standards. These four new products bring advanced connectivity and features to the market that we believe will make them unique.”

The Concert-1 and Concert-2 are direct boxes aimed at interfacing musical instruments such as acoustic guitar, bass and keyboards with the PA system. The Concert-1 is a single channel direct box with standard ¼” input and throughput. Inside a Jensen JT-DB-EPC transformer performs the balancing and lowers the impedance to ensure optimal signal transfer from the instrument to the PA’s mic input. A handy 1/8” (3.5mm) TRS connector enables you to connect a laptop computer to the Concert-1 and the signal is summed to mono by dressing the selector switch. This also turns the input and thru into left and right ¼” jacks for stereo to mono conversion when used with a keyboard. The Concert-2 is a stereo version that retains full stereo functionality at all times. The Jensen transformer is particularly important when used with high output instruments such as keyboards and active bass that can often overload active direct boxes.

The Media-1 and Media-2 direct boxes are similar in that they too are equipped with Jensen JT-DB-EPC transformers. But in this case, each of these is also equipped with a variable pad that enables the user to precisely adjust the input level to enable all types of media sources such as laptops, tablets, video players and DJ mixers to be connected using the ¼” RCA or 3.5mm inputs while allowing the user to set the signal level on the fly. The Media-1 is a single channel device that automatically mixes the stereo source to mono saving valuable channels in the PA system while the Media-2 retains full stereo functionality. 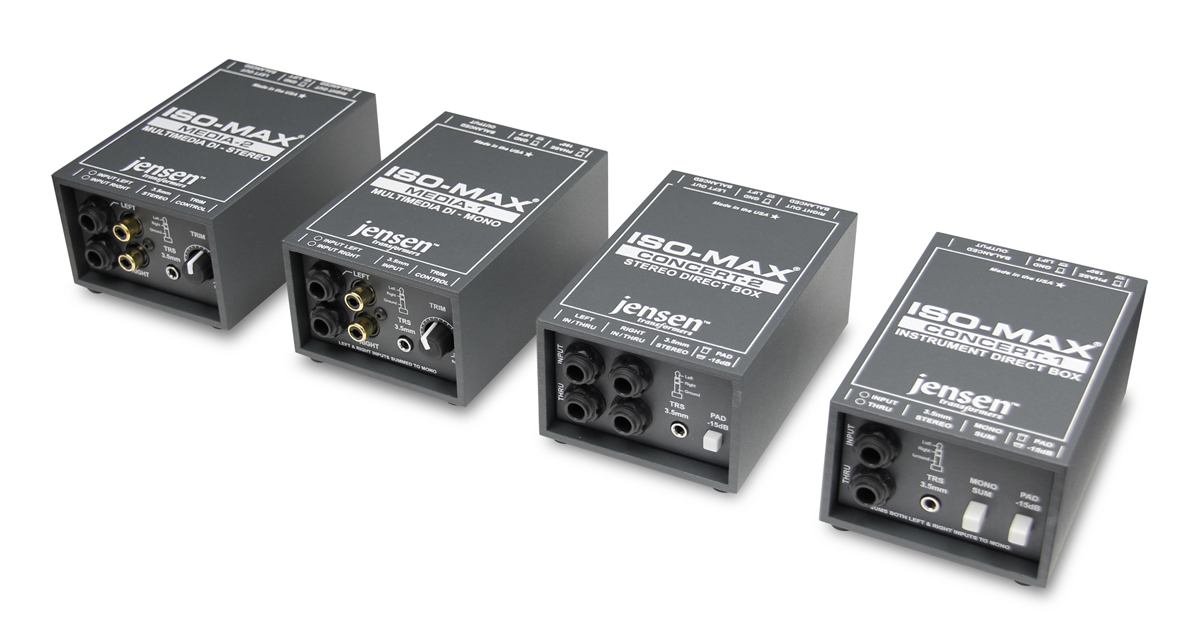 The Jensen Concert and Media direct boxes feature a rugged aluminum outer shell with a slide-in steel shell on which the circuit board, switches, connectors and all important transformers are mounted. The design creates protective areas at each end to keep the sensitive components out of harm’s way.

As with all Jensen products, these are proudly made in the United States and feature exceptionally linear performance from 10Hz to 40 kHz. Galvanic isolation, internal faraday shielding and a mu-metal exterior combine to provide unmatched noise rejection and immunity from buzz and hum caused by ground loops. Jensen ISO-MAX products are guaranteed for 3 years while the internal transformers are guaranteed for 20 years.