IK Multimedia introduced Mic Room, a microphone-modeling app for iPhone, iPad and iPod featuring the sound and tone of up to 20 of the world’s most coveted recording studio microphones. To use with the app, IK Multimedia also launched the iRig Mic Studio, an ultra-portable pro-quality large-diaphragm condenser microphone to go.
IK Multimedia continues to expand its range of tools for recording and making music with mobile devices. The Italian mobile music creation technology specialist has introduced its new Mic Room microphone-modeling app for iPhone, iPad, and iPod touch. Designed to complement IK’s full range of analog and digital hardware microphones, Mic Room gives musicians, audio engineers, recording hobbyists and everybody in between the ability to “re-mic” their IK Multimedia microphone to sound and perform like the most coveted microphone models of all time. 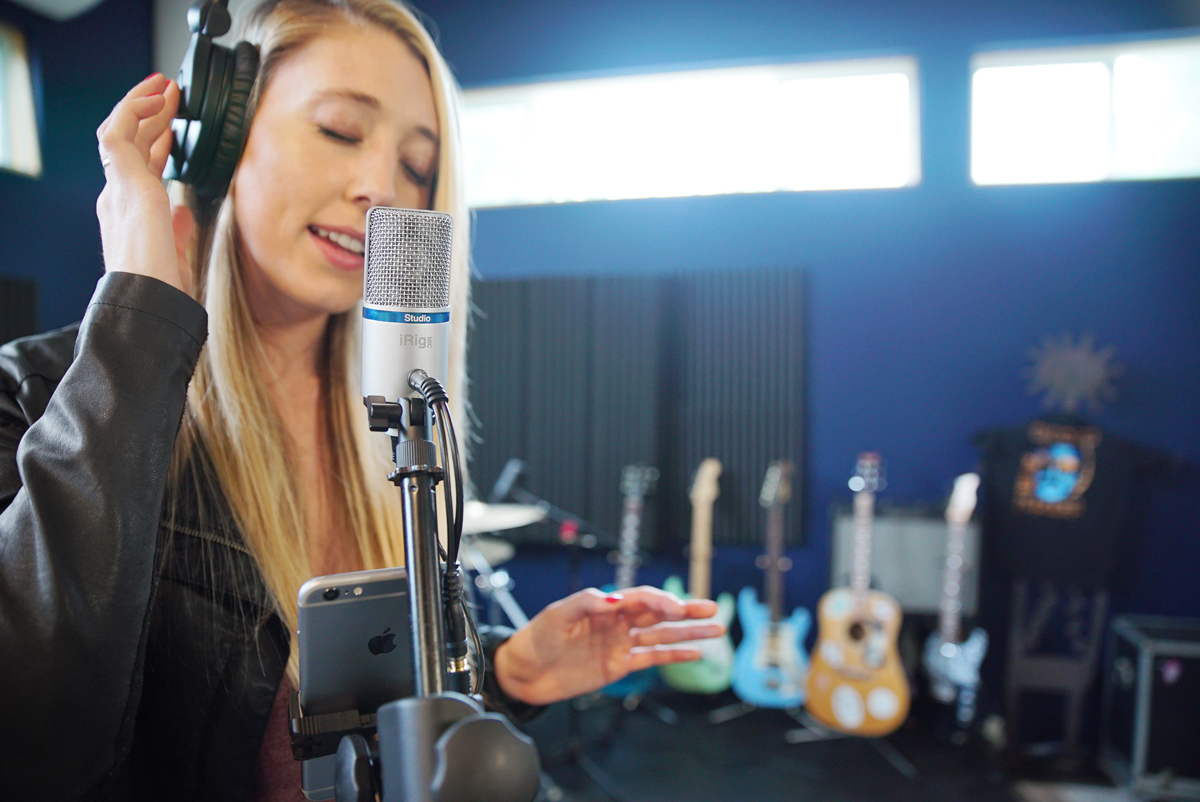 With classic dynamic, condenser and ribbon microphone models to choose from (plus other unconventional and highly creative models), it offers a treasure chest full of inspiring tone-sculpting tools.

At its core, Mic Room is all about enhancing the sonic flexibility and versatility of IK’s range of digital and analog microphones. It lets people change the tone of their favorite IK microphones via a comprehensive and expandable collection of virtual mic models that can be applied to impart the style and character of a number of A-list production studio favorites.

The full version of Mic Room comes with 8 virtual mic models that cover the complete spectrum of sounds from the classic to the contemporary. This initial library can be expanded via in-app purchases — extra content can be bought a-la-carte or as a bundle. 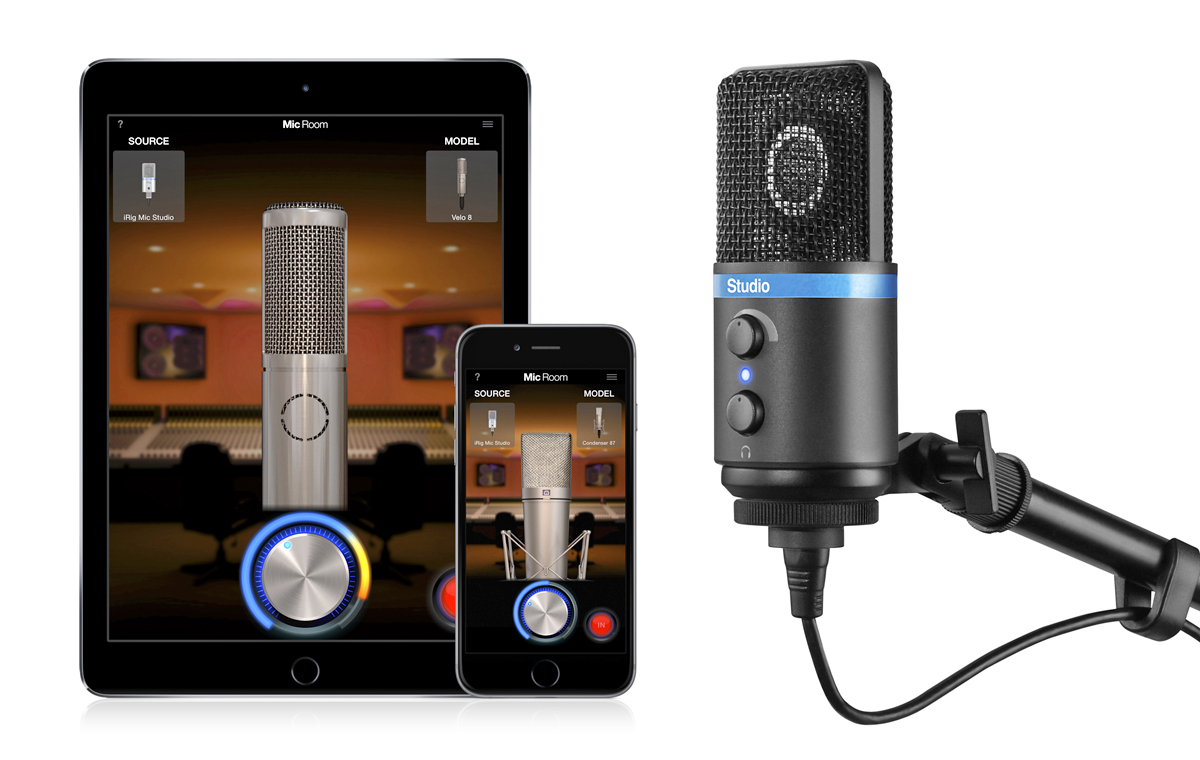 Mic Room works with any of IK’s range of digital and analog microphones for iPhone, iPad and iPod touch and it even works with the built-in mic and Apple headset microphones. Whatever the microphone of choice, Mic Room will automatically detect the input and each microphone model can be tweaked to deliver the best sound possible thanks to an intuitive graphic interface that provides an easy-to-read level meter and a touch-and-drag gain knob.

Mic Room is also Audiobus and Inter-App Audio compatible, so it can be effortlessly used with other powerful music creation apps. This unleashes a whole new level of creative possibilities on top of the sonic flexibility imparted by Mic Room itself. The app is available now for just $/€7.99. An expandable free version is also available. A native iPad version will be available soon. 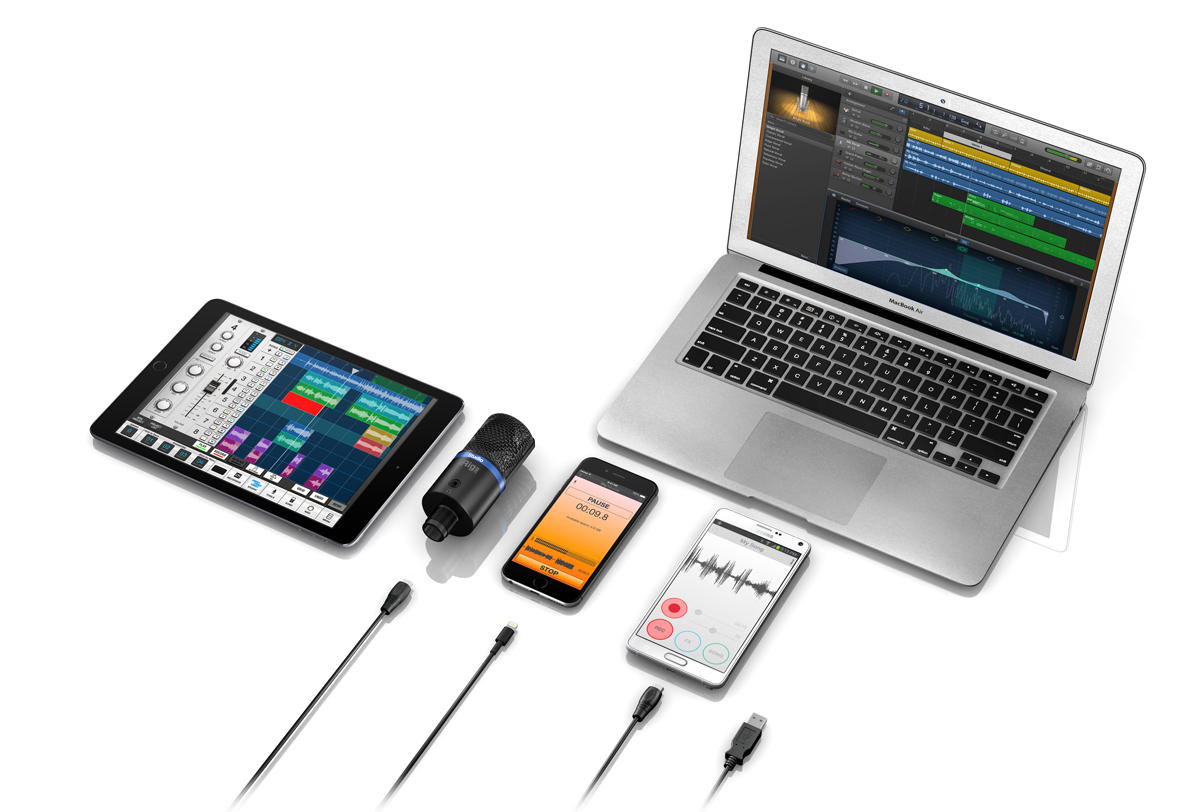 The iRig Mic Studio is an ultra-portable large-diaphragm digital condenser microphone — with a 1” diameter capsule — that’s perfect for musicians, vocalists, home producers, podcasters, voice-over artists and anyone else who needs to capture professional quality sound. Designed for plug-and-play seamless operation with iPhone, iPad, iPod touch, Mac, PC and even Android devices supporting audio apps, it allows anyone to record with better-quality results for the price.

Of course, its release coincides with the arrival of the new Mic Room microphone-modeling app for iPhone and iPad, providing emulations of everything from ribbons to condensers to dynamics.
iRig Mic Studio features a large 1” diameter back electret condenser capsule, a 24-bit audiophile-grade A/D converter (with 44.1/48 kHz sample rate) and a built-in low-noise high-definition preamp. These, combined with its 133dB SPL rating, allow for optimal audio capture.

In addition, iRig Mic Studio also sports a comprehensive set of monitoring and level control features. It comes with a gain control knob and a multicolor LED level indicator to allow for on-the-spot adjustment. It also has a headphone output jack with its own level control for monitoring directly from the microphone itself. For better positioning while recording, iRig Mic Studio comes with a sturdy and portable tabletop tripod stand. And for improved portability, it comes with its own protective travel pouch. 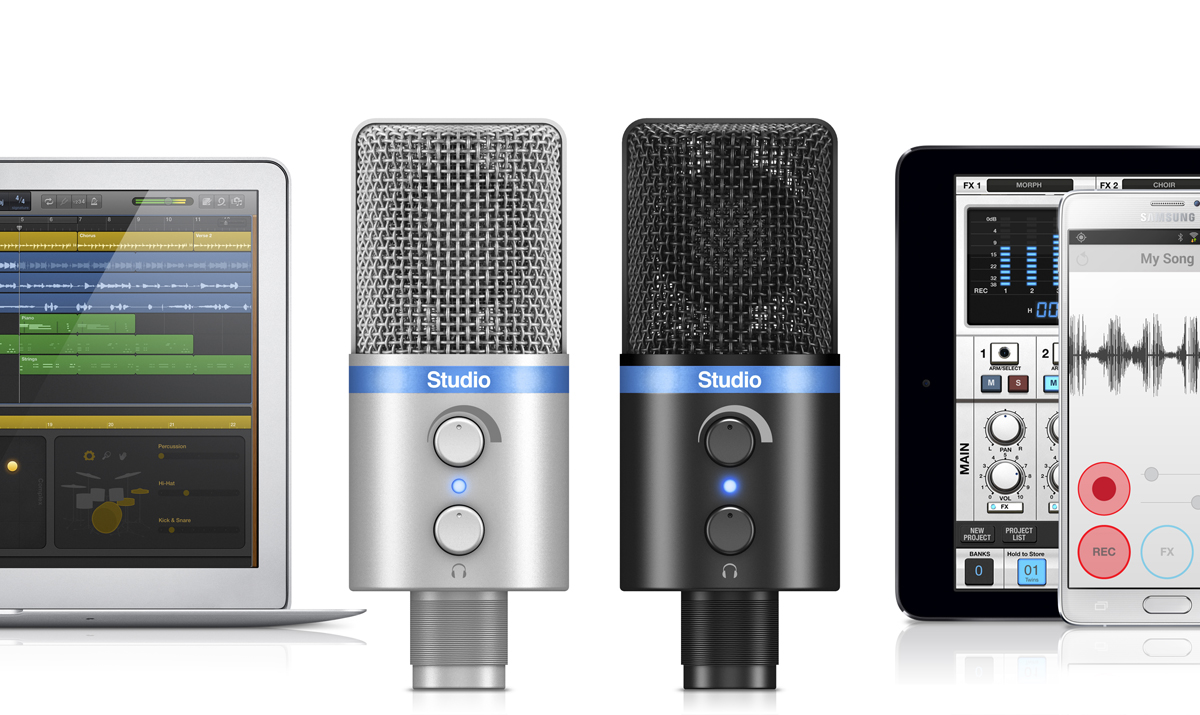 The microphone comes with a female micro-USB port and an assortment of cables: Micro-USB to Lightning for iPhone, iPad and iPod touch; micro-USB to micro-USB OTG for Android (Android 5); and micro-USB to USB for Mac and PC.For immediate recording, iRig Mic Studio also comes with a powerful suite of vocal apps, including VocaLive, an expandable, powerful effects processor and multi-track recording app; EZ Voice, an easy-to-use sing-along app; and the iRig Recorder audio capture app.