Hal Leonard Publishes The iPad in the Music Studio Book

An interesting new book from Hal Leonard’s Quick Pro Guides series, The iPad in the Music Studio focuses on the iPad’s connectivity to the professional, project, and home music studios. An interesting tour of the latest iPad-related music hardware and software (apps) on the market which is important to explore now, because it will be old news by this time next year.
The iPad in the Music Studio is the second of two iPad-related publications by the authors Thomas Rudolph and Vincent Leonard. The first was called Musical iPad: Performing, Creating, and Learning Music on Your iPad. This new book is designed to increase the spontaneity and creativity of musical productions by opening up the world of the iPad to musicians, recordists, and DJs.

The iPad in the Music Studio focuses on the iPad’s connectivity to the professional, project, and home music studios. The authors take the reader on a tour of the latest iPad-related music hardware and software on the market. Using QR codes throughout the book quickly links to demo videos of the products covered, turning the book into a multimedia experience. 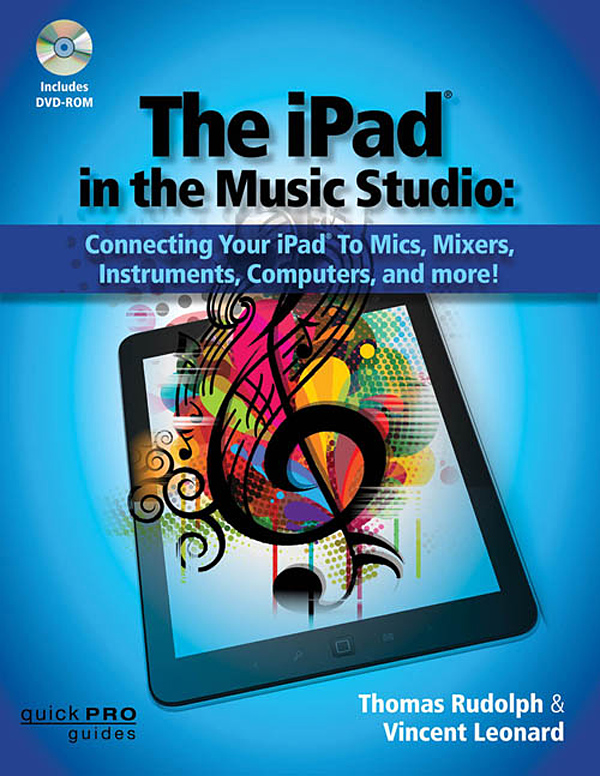 The iPad in the Music Studio examines:
•    Hardware to link microphones and instruments for live multi-track recording
•    Controlling desktop software with the iPad
•    Using the iPad and iPhone with mixers
•    The iPad and Guitar EFX software and hardware
•    DJ equipment and apps
•    Using the iPad to publish and distribute music on social media

This book is a step-by-step guide through the most popular and productive apps for the iPad 2, third- or fourth-generation iPad, or iPad mini running the latest versions of the iOS. Written by two experienced authors of music technology textbooks, training, and courses, the book also provides guidance on the best apps for music and how to apply them when creating and recording music.

About the Authors: Thomas Rudolph is an educator, performer, composer, and author of several music-related books. He develops and teaches courses for the Berklee College of Music online school, Central Connecticut State, and Villanova University. Rudolph is co-founder of TI:ME (Technology in Music Education) and his articles have appeared in the Music Educators Journal, the Instrumentalist, and Downbeat Magazine. He lives in Philadelphia.

Vincent Leonard is coauthor of Recording in a Digital World, Finale: An Easy Guide to Music Notation, and Sibelius: A Comprehensive Guide to Music Notation. His works as a producer and composer have premiered nationally and internationally, and he is widely known as a copyist and arranger, having worked with Peter Nero, the Philly Pops Orchestra, Doc Severinsen, the London Symphony Orchestra, and more. He lives in Philadelphia.