Focusrite iTrack Dock: the professional dock for recording on iPad, is now available

Focusrite confirmed availability of its iTrack Dock, a professional dock for recording on iPad. iTrack Dock is the first solution of its kind not to suffer from the physical adapters and connector problems that plagued the original iPad docking products. It works with any recent iPad, including the Mini.
After launching Tape, a free iPad recording app, the introduction of iTrack Dock as a complete music recording solution for the iPad seemed like the logic next step for Foscusrite. Originally introduced at the NAMM Show 2014, iTrack Dock is a comprehensive studio-quality iPad recording interface, featuring dual Focusrite microphone preamps plus two line inputs and an instrument DI, independent stereo monitor and headphone outputs, and a USB port for class-compliant MIDI instruments and controllers. 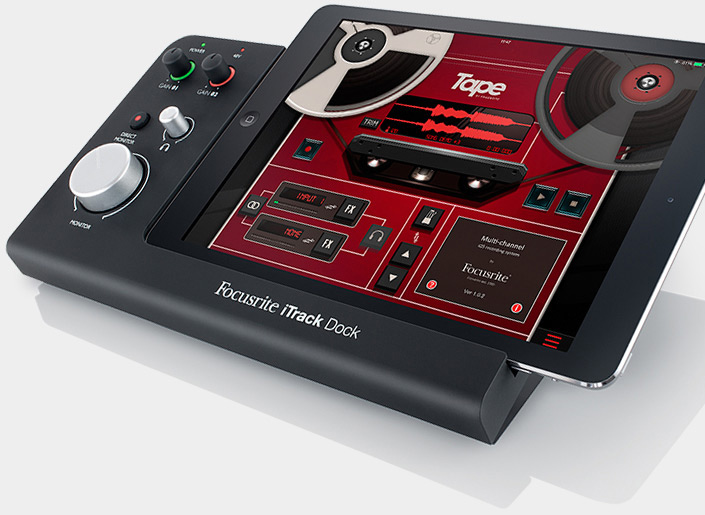 Even for applications where the iPad is used only as an audio source, the device provides high quality balanced main monitor outputs and stereo headphone output, with more than enough power for headphones and powered monitor speakers.

With Garageband, Auria, Cubasis or any other recording app, iTrack Dock makes it possible to do professional quality recordings on any iPad with latency-free direct monitoring. It provides everything required to record, monitor and control music on iPads (Mini, Air, etc.) with digital conversion at up to 24-bit, 96kHz sampling and all the control and functionality you’d expect in a traditional recording interface. It even charges and powers the iPad at the same time.

With two Focusrite preamps, main and monitor outputs with 105dB dynamic range, and all controls on the easily-accessed, angled front panel next to the iPad, iTrack Dock brings professional audio to any Core Audio app including GarageBand, Auria, Cubasis and Focusrite’s Tape app, which is included in the box.

Compatible with any Lightning-equipped iPad and instrument, microphone, class-compliant MIDI controller or audio device, iTrack Dock allows to power and charge the iPad, and powers a USB MIDI device – such as a Novation Launchkey Mini keyboard controller – all at the same time. No need for USB hubs or Apple’s camera connection kits.

iTrack Dock also features easy-to-reach, dedicated monitor and headphone controls, while the input level controls incorporate Focusrite’s unique “Gain Halos”, for accurate instrument and microphone level monitoring. “Gain Halos” is a ring of light around the input gain control to easily set the input gain: green for healthy signal, red if it’s too hot. The two Focusrite mic preamps – the same as featured in the Scarlett range of USB audio interfaces – include 48V Phantom power for use with condenser microphones.

The included Tape by Focusrite recording app for iPad, offers instant recording, mastering and sharing without the complexities of traditional music-making software. Perfect for songwriters, musicians and home recordists who want to take advantage of their studio gear alongside the simplicity of iPad.
www.focusrite.com/itrackdock
related items