French music software and hardware company Arturia is celebrating its 15th anniversary milestone with an all-new contemporary company logo and a 50% off campaign on 15 software instruments, including its great classic synthesizer emulations and iPad apps. The “celebrations” last between July 31 and September 8, inclusive...
Founded in Grenoble, France, in 1999, Arturia specializes in the development of music software and hardware for professional and amateur musicians. Focusing on innovation, the company integrates the latest advances in computer music research and technology into its products. This involves working closely with partner research institutions, such as IRCAM France, in the development of cutting-edge musical instruments and software, which have often been used to make hit records and Hollywood soundtracks. One of Arturia’s core technologies is True Analog Emulation (TAE), an advanced proprietary technology enabling accurate modeling of analog circuitry behavior on personal computers. Developed by Arturia’s in-house Signal Processing team, this technology has been employed to successfully recreate the sounds produced by many classic analogue synthesizers. 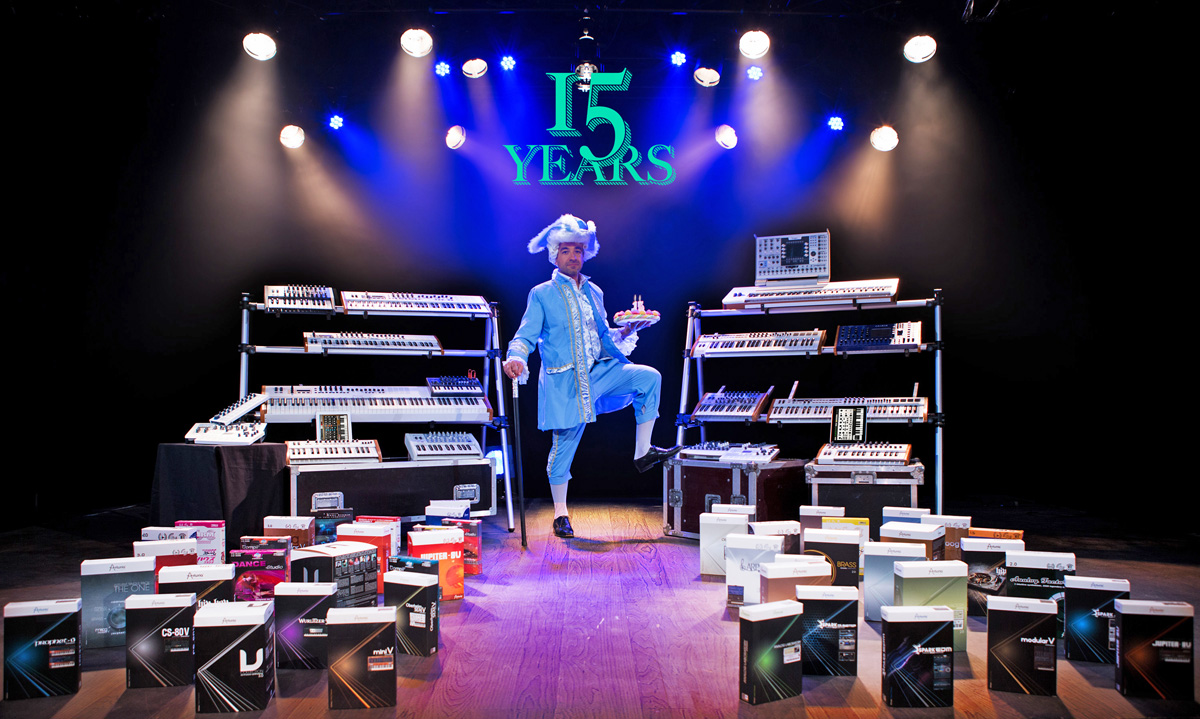 May 2012 saw Arturia turning industry heads when introducing the cost-conscious MiniBrute, an amazingly compact and bijou analog monosynth (boasting MIDI, USB, and CV connectivity together with a host of unique features). Arturia has since broadened its appeal further still by successfully entering the iOS soft synth market and building upon its analogue synth and hybrid hardware/software successes with an ever-increasing product release schedule in keeping with its sustained growth—35 employees and counting.

Coming from a country that was historically hooked on guillotining its heads of state, 15 years is a long time in the cutthroat world of musical instruments and software let alone always endeavoring to remain on the cutting edge. So who better, then, to pop the proverbial champagne cork to start the “revolutionary” celebrations than Arturia President Frédéric Brun. An imaginative individual who co-founded the company back in 1999, he has valiantly led the charge to keep those cutting-edge musical instruments and software flowing—first from Grenoble, and also from West Lake Village, CA.
​

“What a journey it has been since we started Arturia as students and decided to take the best that technology has to offer and bring it to musicians,” Brun begins, before adding: “And what a pleasure to celebrate our 15th anniversary this year! From the time we created Storm — a virtual studio aimed at making music creation easy and affordable—to recent hardware and hybrid hardware/software releases such as MicroBrute and BeatStep—both representing truly innovative gear for the contemporary musician—inventing new musical instruments, inspiring to everyone and accessible to many, has always been our raison d'être.”

Here’s to the next 15 years!
The dedicated 15th anniversary promotion website is here.
www.arturia.com
related items