Let’s start with the Ear Gear Expo section of the show. The cans that started me on the road to headphone nirvana were my set of Etymotic ER4PT in–ears (www.etymotic.com). At the Expo, Etymotic upped the ante making “the world’s most accurate earphones… better!” With an anodized all metal body, dual balanced armature (BA) transducers, and a detachable cable, the new $349 ER4SR has, to my ears, lower distortion with that subjectively uncolored, distinctive Etymotic sound. For mo’ betta bass, the $349 ER4XR gently lifts your low end starting at around 500 Hz. Campfire Audio (www.campfireaudio.com) has extended its line of machined aluminum in-ear monitors (IEMs), with the new $1,099 Andromeda featuring five BAs, and the $499 Nova. The more affordable model relies on dual BAs, also in an aluminum shell. 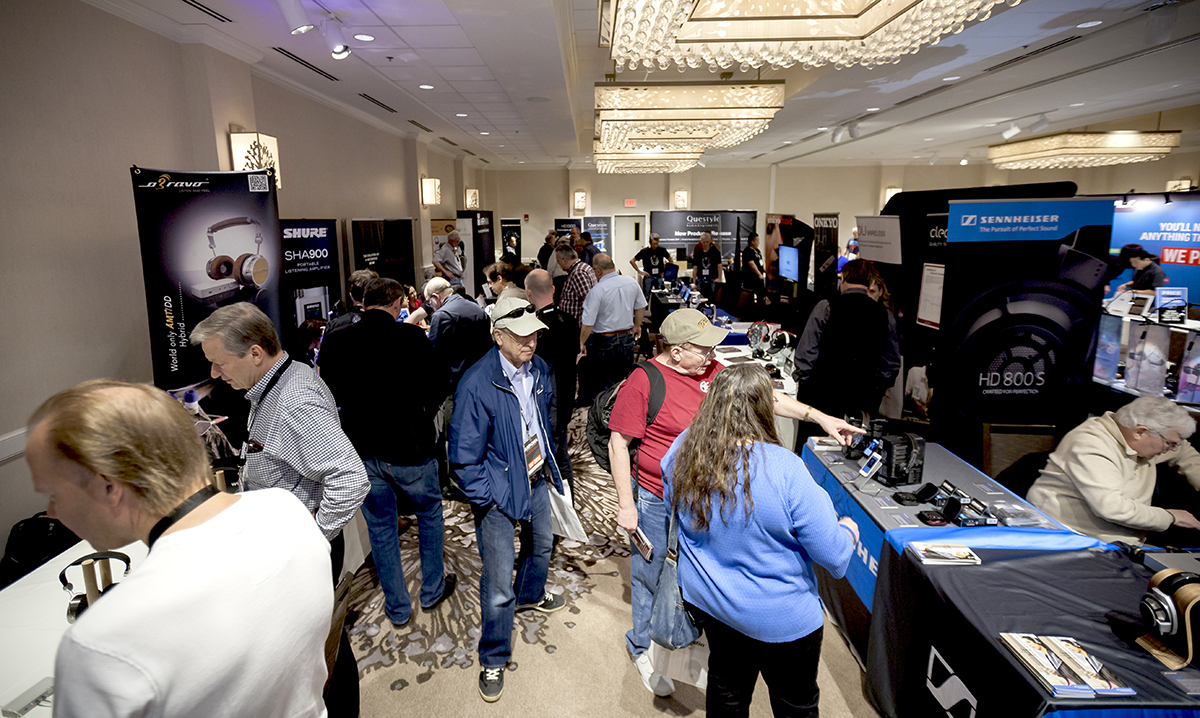 At two previous shows I’ve attended, Woo Audio (www.wooaudio.com) had WA8 prototypes out for inspection. This time around, it was a done deal. The $1,799, 2.4 lb WA8 Eclipse totable hollow-state headphone amplifier/DAC is in production, and it looks and sounds great. Based on a ES9018K2M chip, the Class A SET unit has an analog input for desktop versatility, and includes a clear Pelican hard case. Mike Liang also directed me to the updated WA7 Fireflies, with a newly designed DXD–capable DAC and improved amplification.

Trend setters Iriver had a beefy new version of its non plus ultra of high-resolution audio (HRA) portables, the Astell&Kern AK380 (www.astellnkern.com). The $3,999 AK380 Copper and companion $999 AK380 AMP Copper amplifier/powerpack retain the hi-fi pedigree of the aluminum versions, but opt for solid CNC–machined copper cases that are both weighty and wonderful.

Zach Mehrbach showed me his latest creation, a prototype of “The ZMF” headphone amplifier, a collaboration between Sonnare Audio and ZMF headphones (www.zmfheadphones.com). With pairs of 41NP and 6SN7 tubes doing the work, the product was designed with sound quality, not specsmanship, in mind. The production version should cost about $1,000.

Michael Fierro of Taction Technology gave me a fun demo of their closed–back circumaural Taction Kannon (www.tactiontechnology.com). The $499 Kannon puts the slam in headphone listening, with the inclusion of an adjustable, planar magnetic haptic transducer in conjunction with its 40 mm dynamic driver. These cans sound far better than any gamer/enthusiast headphone I’ve heard, and the palpable low-frequency aspect only enhances the experience.

Another new IEM vendor was on the scene, this time from north of Atlanta. Empire Ears (www.empireears.com) sells custom and universal IEMs, starting with the $429 dual BA Supra-II. Its top of the line $2,099 Zeus-XIV is a 14 BA “seven-way” design with two low-frequency BAs, six for mid frequencies, and six to handle high-frequency tasks. The Zeus-XIV delivers all that through four separate bores.

The kids at Cavalli Audio (www.cavalliaudio.com) were giving attendees a taste of their Liquid Tungsten prototype headphone amplifier. Still a bare board, the new hollow-state flagship will sell for approximately $5,000 when it’s ready to ship.

Though Sennheiser didn’t bring the HE1 to AXPONA, there was another, far more affordable electrostatic headphone option at the show, from MrSpeakers no less (www.mrspeakers.com). Two Ether Electrostat prototypes were playing, powered by Cavalli Liquid Lightening and, from my brief listen, they sounded less strident than what I’m used to from Stax. The price isn’t not yet set, but it is expected to be somewhere between $1,500 and $5,000. They’re scheduled to ship by the end of this year. MrSpeakers will provide an adapter with the headphones for Stax-style pinout to make it easier for users to find amplifiers and energizers.

You may remember Echobox (www.echoboxaudio.com) from my report of last year’s Rocky Mountain Audio Fest (RMAF) show. At AXPONA, the company announced that its $449 Explorer will be shipping around June to IndieGoGo backers, and around July for everyone else. Explorer is a rare beast in both its wooden hip flask form factor, and it’s Wi-Fi radio. The network feature enables it to be a TIDAL client, and it’ll ship with a three-month trial subscription.