R&D Stories: The Genesis of the ZYLIA ZM-1 and Next-Generation Audio Recording

This article is an interesting testimony from Piotr Szczechowiak, co-founder and COO at Zylia, a startup company from Poland, known for its ZM-1 spherical microphone array. The ZM-1 records and separates each instrument and vocals into a separate track using an innovative and patented recording sound-source separation technology, combining dedicated software and cloud processing. This article was published in audioXpress, January 2019
Most musicians have learned the hard way that recording in the studio is a completely different experience than practicing in the garage or performing on stage. It can be a horrible experience — and a difficult and expensive lesson — discovering that your band isn’t playing in balance or perhaps even in tune. Making a high-quality recording and demo of a jam session or rehearsal can be challenging and costly as well, requiring a fair amount of equipment and a lot of time to set it up just right. 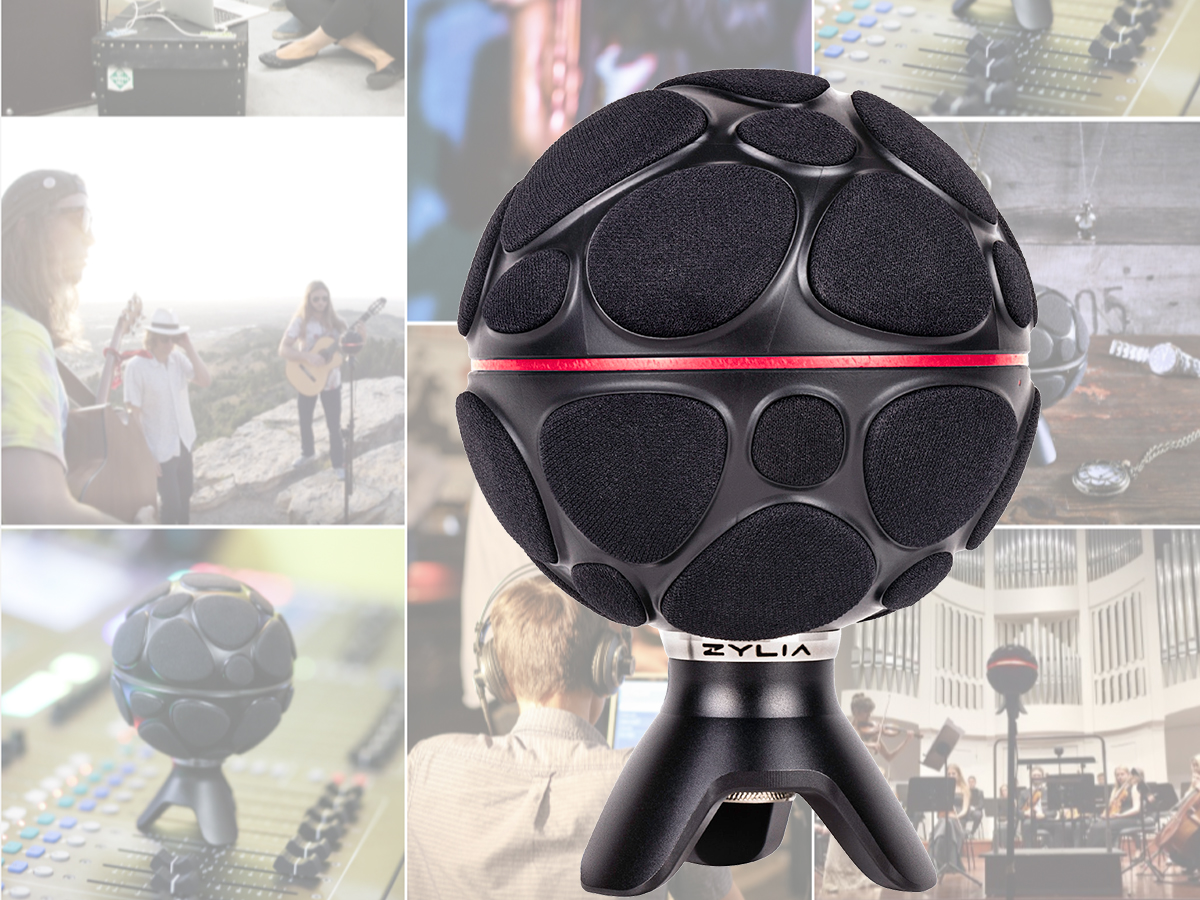 At Zylia, a company made up of musicians, sound engineers, and experts in electronics and sound processing, we’ve faced these same challenges. So, we decided to take them on and create a better hi-fi recording solution. While Zylia already had developed patented software that we knew could separate out individual voice and instruments or audio objects, no microphone on the market was capable of fully leveraging this technology. So, we built our own microphone system.

Today, our ZYLIA ZM-1 microphone array and ZYLIA Studio software offer a simple, fast, and economical way to capture an entire sound scene, automatically separate out individual soundtracks by source, and create a demo within minutes of recording (there is even an Automix feature). Raw files can also be exported and brought into a digital audio workstation (DAW) for further processing.

The ZYLIA ZM-1: An Industry First
Effectively serving as the world’s first Portable Recording Studio, the ZYLIA ZM-1 is a lightweight, compact, economical, and visually appealing recording solution capable of delivering 48 kHz/24-bit resolution while capturing the full spatial sound scene. Equipped with 19 microphone capsules, the system can auto-detect sound sources from around the microphone array and then capture that sound into the software and separate out individual tracks for further editing on a DAW. No matter where they are recording, users simply connect the ZYLIA ZM-1 to a laptop via USB and begin recording noise and distortion-free audio signals. ZYLIA Studio, the complementary application engineered for the ZYLIA ZM-1, enables automated separation of instruments and vocal tracks from the overall recorded sound mixture.

Bands use the ZYLIA ZM-1 to capture rehearsals and jams without the usual cost and tedium of extensive equipment setup, which means they can focus on their music rather than the recording process. When they do head into the studio, they have experience working with their sound and can better understand how to make the most of their time.
The ZYLIA ZM-1 is also valuable as a complement to studio microphones. Audio and production engineers who tested it called the system a perfect room mic. At less than $1,000, it’s a relatively inexpensive addition to a recording kit, and the data and the audio that it captures can open up new options and possibilities for the final mix created in post-production. Podcasters have also used the ZYLIA ZM-1 while working in the studio to quickly detect multiple voices positioned around the microphone without messy phase and crosstalk issues affecting the overall audio.

But one of the most innovative uses of our microphone array has been in 3D sound design. As a third-order Ambisonics audio recorder, an uncommon achievement even at a higher price point, the ZYLIA ZM-1 is well-suited for 360° and virtual reality (VR) audio production. In fact, the only other devices that even slightly resemble what we have developed are experimental-grade tools that are only available to well-funded universities and laboratories. Experts across the audio industry have known that it is possible to build this kind of device, and we’re proud to be the first company to make it work in a high-quality product designed and priced for musicians and other audio professionals.

Innovative Design
Our primary requirement in designing the ZYLIA ZM-1 was ease of use. We wanted to make something that would be useful for musicians—and not necessarily people who know anything about
audio engineering or audio recording. We wanted the product to be something they could use right away, using software as intuitive as a smartphone app.

Obviously, the quality of the audio recording was also a priority. Musicians and audio engineers naturally are picky when  it comes to sound quality, and so we needed recording technology— specifically, high-end microphone capsules — that would allow us to cater to their needs. Accordingly, our design featured a microphone array with a specific number of microphones placed specifically for optimal music recording, as well as ambient or atmosphere recording.

The ZYLIA ZM-1 is the first product on the market based on Infineon’s microelectrical-mechanical system (MEMS) microphone technology, which significantly raises the bar for hi-def audio recording. Infineon’s XENSIV MEMS microphones are designed for applications where low self-noise (high SNR), wide dynamic range, low distortions, and a high acoustic overload point are required, and they’ve proved to be a perfect fit for the ZYLIA ZM-1.

In addition to enabling hi-fi and far-field audio recording, the microphones provide flat frequency response (28 Hz low-frequency roll-off) and a tight manufacturing tolerance that ensure close-phase matching of the microphones and a low variation in parameters (below 1%) essential to the high performance of our audio processing software. In combination with our algorithms, the microphones enable the noise cancellation and directionality critical in music and in 360° and VR soundscapes.

We did a lot of testing with different microphone array layouts and with different sizes and shapes of the microphone itself. The spherical design allows for deployment of the microphone capsules equally to perfectly cover the whole area being recorded. Determining the appropriate size of a microphone system is always a trade-off between capturing the low and high frequencies better, and we feel we found the sweet spot while also meeting another key requirement: portability. The ZYLIA ZM-1 is a mobile device that fits easily in a backpack for a road trip with the band, or anywhere, really.

Robust Processing Software
We developed the ZYLIA ZM-1 and ZYLIA Studio software primarily for musicians, but during development we received a lot of input from audio engineers asking about using the device to record 360° audio for movies, VR, games, and other purposes. Amid demands for more control, functionality, and integration with other software, we created the ZYLIA Studio PRO and the ZYLIA Ambisonics Converter software, which offer sound engineers and VR enthusiasts more control over the recording process—and greater post-processing capabilities.

The ZYLIA Studio PRO software enables the ZYLIA ZM-1 to feed via a VST/AU plug-in directly into a DAW for real-time manipulation of the microphone. Spatial filtering and signal separation allow the 19 capsules in the ZYLIA ZM-1 to be turned into an unlimited number of virtual microphones, which means that users can set and monitor virtual microphones of multiple polar patterns or characteristics, both live and during post-production. They can also take advantage of presets for surround or ambient recordings (5.1, 7.1, 5.4.1, 22.2, and more) and make the best out of the recordings done with our microphone and then take them into the DAW to add effects just as they would with any other microphone. The ZYLIA ZM-1 ties into this workflow seamlessly.

The ZYLIA Ambisonics Converter converts multichannel recordings made with the ZYLIA ZM-1 microphone array into Higher Order Ambisonics (HOA) full-sphere surround sound recordings, making it easy for users to prepare 3D audio recordings for playback on the Facebook 360 and YouTube 360 platforms. The ZYLIA ZM-1 is the only widely available microphone to support up to third-order Ambisonics—a high degree of the spatial resolution in recording—and nothing on the market in its price range can do what our microphone can.

Real-World Recording
We tested the ZYLIA ZM-1 with more than 100 bands, but the system has proved useful in some surprising and heartwarming applications. One person took the system to Africa to record tribal dances and songs, another put it in the middle of a mosque to capture the sound of many people praying, and a third took it into the wilderness to capture high-definition recordings of birds in their natural habitat. Planetariums are using the technology to create new immersive audio-visual experiences for their audiences.

The beauty of the ZYLIA ZM-1 is that it records so much data about the scene that a user can generate a binaural mix specific to headphones, a 360° scene with rotation, and a normal stereo or 5.1 output from a single recording. In the past, each of these output formats would have required its own specific mix of microphones. With ZYLIA ZM-1 recordings, musicians and audio engineers enjoy mixing and output options they’ve never had before.

We’re proud that our technology enables people to produce audio in a new way, and it is particularly compelling for those artists creating 360° experiences. Sony Music UK used our microphone for 360° sound recording in a video clip for the band First Aid Kit and was nominated for the 2018 Digital Cinema Media Awards in two categories: Best Use of Innovation and Best Use of Cinema (small). For a host of other 360° movies, the ZYLIA ZM-1 has given producers the ability to go from stereo pointed at some spot in the scene to immersive audio that’s quite striking. It’s quite a leap forward, and the difference is immediately obvious. In creating an affordable microphone array capable of high-definition 360° sound capture and by providing software that supports automated track separation and flexible sound orientation, we’re helping the audio industry catch up with the video industry’s advances.

As excitement surrounding the ZYLIA ZM-1 continues to grow, we’re offering workshops at key industry trade shows to help musicians and audio engineers take full advantage of the device and processing software, whether to improve on their current work or to move into a less familiar realm, such as 360° audio, Ambisonics, or VR. We look forward to hearing about all the new places they take this remarkable microphone. For more information, visit www.zylia.co. aX

This article was published in audioXpress, January 2019.
For more updates about Zylia, click here.

About the Author
Piotr Szczechowiak is the co-founder and COO at Zylia and manages the day-to-day operations of the company. He makes sure that Zylia hardware and software fits together, manages the finances, and takes care of market testing and customer relations. Together with Tomasz Zernicki he founded Zylia. They both have extensive industry and academic experience, leading several R&D projects. They successfully managed the team, which developed one of the core technologies in the MPEG 3D Audio standard. Piotr holds a Master of Science degree in Telecommunications from the Poznan University of Technology (Poland), a PhD in Electronic Engineering and embedded systems from Dublin City University (Ireland). He can be reached by email here.