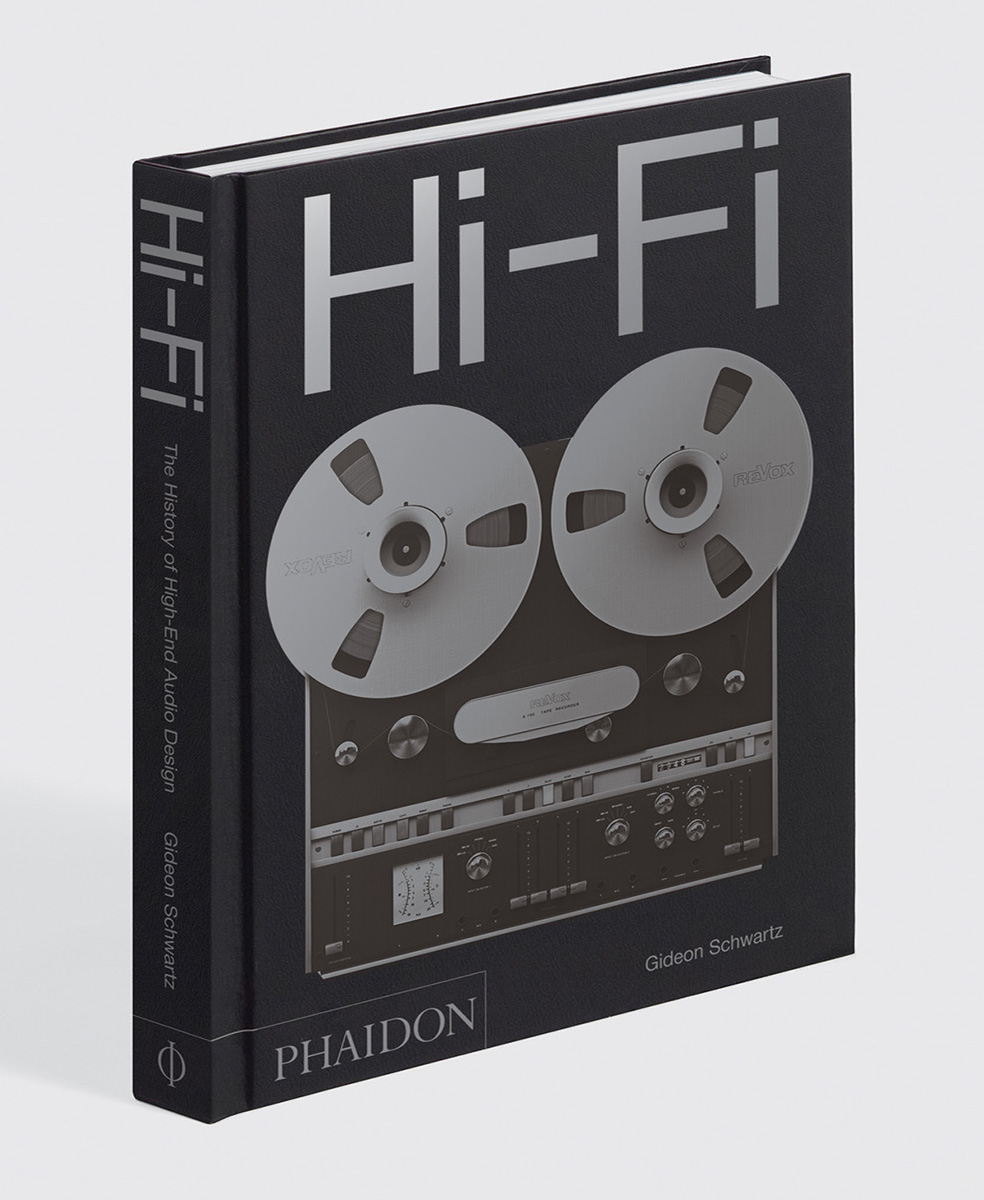 Hi-fi audio appeals to us in many ways. The fidelity of the music to our ears, the emotion of it to our hearts, the constantly changing technology to our intellect, the craftsmanship and design to our eyes and sense of touch, with the stories of the people behind the products adding a touch of humanity.

I recently read Gideon Schwartz’s new large-format book, Hi-Fi –The History of High End Audio Design, with hopes that it would appeal to all but my ears. Schwartz’s book is an 8.5” × 11” hardcover “coffee table book” format with 272 heavy glossy pages of text and nicely produced photographs. Text is only two-thirds of the page width, with lots of white space.

Inside the Book
Introduction: The introduction starts with Thomas Edison and focuses mainly on acoustical recording and the first “streaming” service—French inventor Clément Ader’s “Théâtrophone,” which transmitted sound on a pay-per-use basis from theaters over phone lines. Ader describes the concept of stereo in an 1890s patent (two mics, two speakers, and two ears). The narrative between 1890s and 1950 is sparse and jumps around.

Topics covered include the Bell recording experiments of the 1930s, a one sentence mention of the gramophone, Zellaton speakers, early Nordic design ethos, and a sampling of Art Deco tabletop radios. The invention and application of the vacuum tube is not covered, although Schwartz does give us a photo of nice pair of Western Electric 49C amplifiers.

While one can argue there was little in that era that ranks as “Hi-Fi” today, there were a few attempts, such as the Zenith Radio Stratosphere and Crosley Radio Corporation’s Colossus (circa 1936) which had three-way speakers, 37 tubes, 75 W of output power, and weighed 475 lbs.

Technology: Schwartz covers the biggest technology innovations in Hi-Fi: acoustic to electrical recording, magnetic recording, stereo, vacuum tube to solid state, MP3, and both acoustic suspension electrostatic speakers. That said, there is a lot that he left out and readers who are more technical will be disappointed. The list of missing technologies is long: Williamson and ultra-linear amplifiers, MOSFET amplifiers, transmission line speakers, the industry’s flirtation with quadrophonic audio, direct-to-disc recording, direct drive turntables, and improved digital recording and playback (e.g., Neil Young’s Pono) to name a few.

There is a lengthy discussion of the initial concept of stereo circa 1890; however, no mention of Alan Blumlein’s 1933 patent and a mere one sentence mention of stereo LPs (despite the very interesting history of failed Rube Goldberg approaches to putting stereo channels on a disc).

Technical details are infrequent and obtuse. For example, “Class A operation in an amplifier uses 100% of the input signal from a power supply, with no connected elements required in the circuit itself.” Descriptions of solid state vs vacuum tubes are similarly obtuse, and that of electrostatic speakers is misleading, if not wrong. Schwartz states that “When the grids are driven by an audio signal, this, in turn, causes a movement of the air on each side of the diaphragm.” In fact, the grids don’t directly cause the air to move. They cause the diaphragm to deflect, which in turn moves the air. A half-page is spent on pitch, unnecessary for anyone buying this book, while many other terms and acronyms are left unexplained.

The entire DIY and kit movement is absent, save for a short discussion about the Dynaco ST-70. There is no mention of Heathkit or the Hafler DH-200, both of which were state-of-the-art in their day. There are a handful of internal product photos to whet the appetite of the more technical readers.

Design: The photographs do a very good job visualizing the evolution of the design and style of Hi-Fi products through the decades. Schwartz places the design changes in the context of the social environment of the day — early adoption of Hi-Fi components by actors and musicians of the day, the bold visual design of the sexy 1960s. There is not a connected narrative on the topic though — the earlier chapters start with a few paragraphs that set the context for the decade.

Several of what I consider to be pivotal visual designs are missing, such as the Yamaha TC-800 cassette deck, the Mark Levinson No 33 power amplifier, and Lecson Audio’s products. However, Schwartz does a good job showcasing the best in craftsmanship in the photographs.

Companies: Each chapter is organized as a series of short articles with accompanying photographs for 10 to 20 companies. The better of these contain interesting histories of the individuals behind the companies and the company origin stories. They range from a short paragraph to a page in length. I felt the quality of these are better in the earlier chapters. In the final chapter, the companies are at the extreme esoteric (read expensive) end of the spectrum and are almost exclusively ones that Schwartz sells in his New York audio boutique store. These feel to me more like advertising than a history.

There have been a lot of Hi-Fi companies in the last 70 years and any book must cover a subset. There does seem to be a strong bias to Swiss companies (“The micro-precision nerve center of the audio world” in Schwartz’s words) and to companies that Schwartz represents in his store. There is very little coverage of any Japanese companies until the final chapter, and then only the very esoteric. A few missing companies are Rega, Oracle, Cambridge Audio, Denon, Stanton, and Luxman. Surprisingly the (Swiss) firm Nagra, which produced some of the most beautiful and precise portable tape recorders, is omitted. 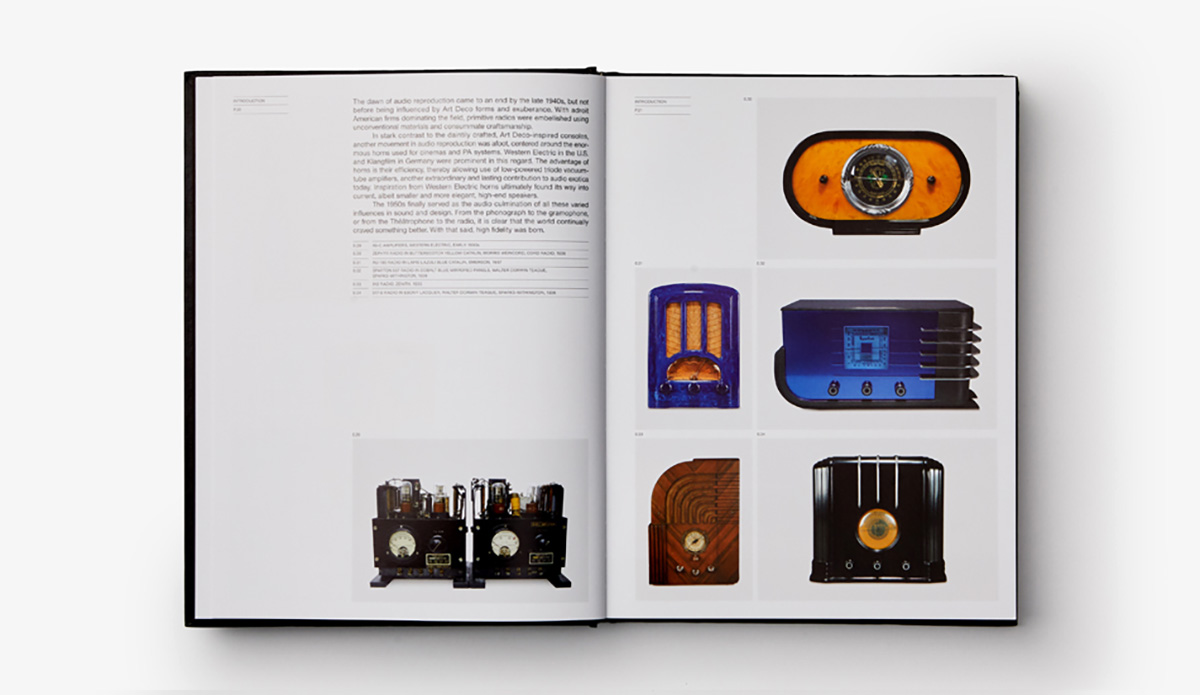 Overall Impressions
Schwartz ends the book abruptly, finishing on one of the company threads in the 2000’s chapter without any coda or commentary. The opportunity to provide some context on the arc of 70 years of Hi-Fi or its future direction is missed. I was left wanting some form of conclusion.

Good books on audio history are few. Sound Design by David Attwood does a better job of telling a connected story of the visual design history, although it showcases fewer high-end products. Tube Amplifiers doesn’t pretend to provide a history — just a collection of excellent photographs of vacuum tube amplifiers. The Art of Sound – A Visual History for Audiophiles by Terry Burrows covers a broader range of products (consumer to high end) and more of the popular culture. There are also a few good books on individual companies: Quad, KEF, McIntosh, and Rega are the ones of which I am aware.

All said, I would purchase Schwartz’s book again for the photographs and company anecdotes, despite the lack of a connected design or technology history. It provided a nice walk down memory lane, and showcased many fine examples of design and craftsmanship. aX 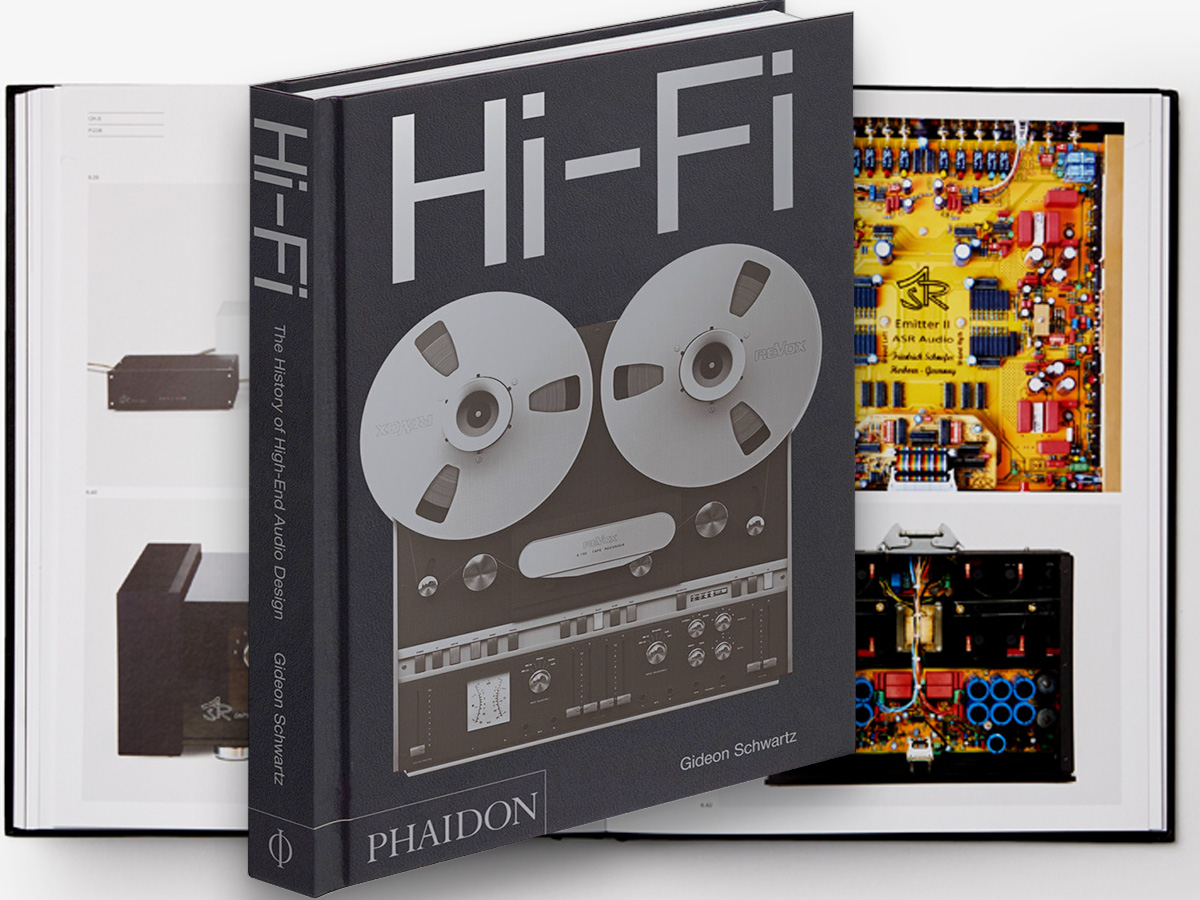 About the Reviewer
Mark Driedger has been experimenting with tube audio since 1980. He completed an MSc in electrical engineering at the University of Waterloo, Canada, and has worked in the telecom industry for more than 30 years in technical and executive roles. His other passions include woodworking, the guitar, and spending time with his wife, children, and grandchildren.

This article was originally published in audioXpress, June 2020.
related items

Unravelling the Technical Solutions in Waterproofing of Audio Devices

Acoustic Praxis: The Elephant in the Lab