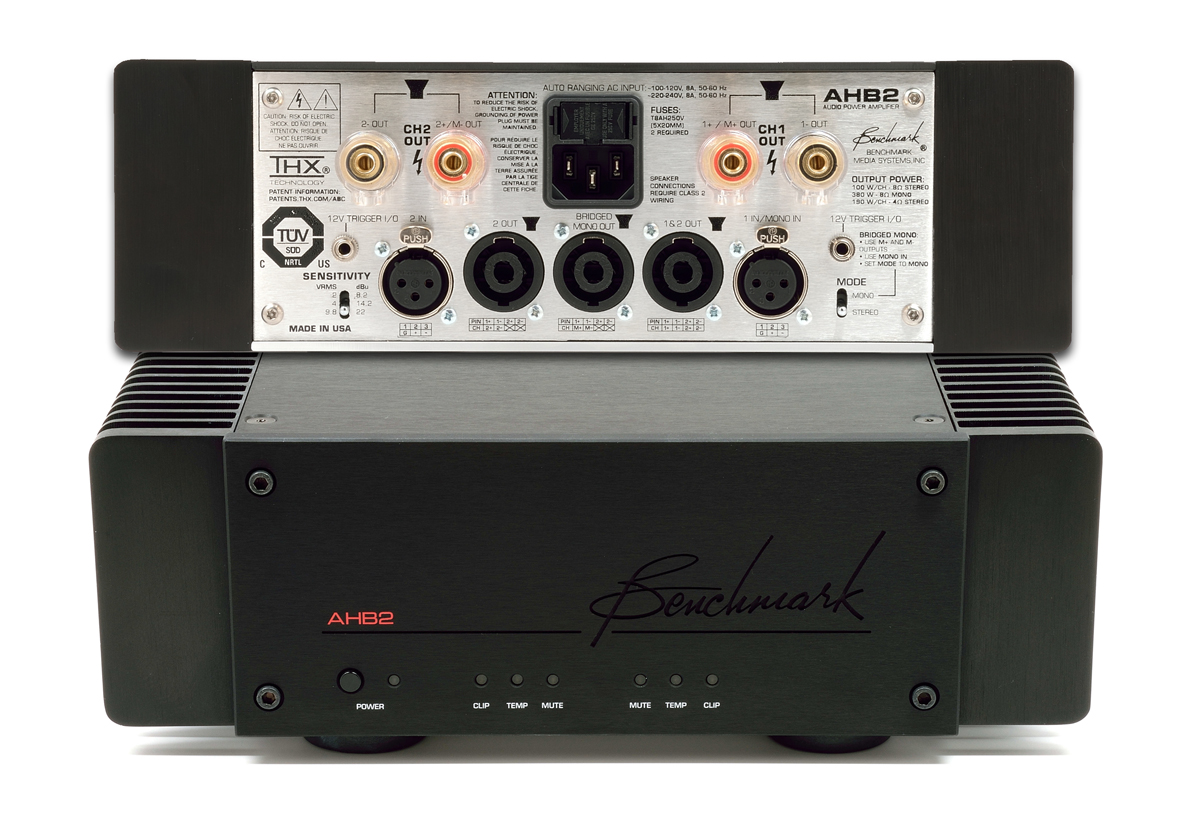 Benchmark Media Systems is a company that has successfully bridged the professional and audiophile worlds. It is an American firm that designs and manufacturers all its products at its Syracuse, NY, facility. The AHB2 was named after Allen H. Burdick, who founded Benchmark Media Systems back in 1983 and passed away in 2013. This is a fitting tribute, since the AHB2 continues the Burdick legacy of technical innovation. Indeed, Benchmark’s new power amplifier is arguably the most innovative product the company has produced to date. The AHB2 challenges several established “conventions” regarding power amplifier design including:

• Class-AB operation of the output stage is a minimum requirement for high-end sound, but Class A is preferred (generating the greatest amount of heat).

The power output rating of Benchmark’s new stereo power amplifier, belies its size and weight at 100W / channel into 8 Ω. The entire package measures 11” × 4” × 9.5” and weighs 12.5 lb. The AHB2, with both channels driven, can also deliver 190W / channel into 4 Ω, and 380 W into an 8-Ω operating bridged mono. Output current is rated at 18 A, per channel, both channels driven (protection shut-down circuitry kicks in above that threshold).

As Gary Galo writes: “The most immediately striking characteristic of this amplifier is a jaw-dropping level of detail and resolution. The AHB2 redefines the word “transparency” and will make many competing amplifiers sound veiled and foggy by comparison. The Benchmark amplifier lets you penetrate the densest orchestral scores with ease, never offering a hint of congestion. (I know I’ve written such things before, but the AHB2 takes it to a new level.)”

About the Author
Gary Galo retired in June 2014 after 38 years as an Audio Engineer at the Crane School of Music, SUNY, in Potsdam, NY. He now works as a volunteer, transferring vintage analog recordings in the Crane archive to digital format. He is the author of more than 280 articles and reviews on both musical and technical subjects. He is an active member of the Association for Recorded Sound Collections (ARSC) and has been a regular presenter at ARSC conferences. Several of his conference papers have been published in the ARSC Journal.
related items