You Can DIY! Build an External Phono Preamplifier 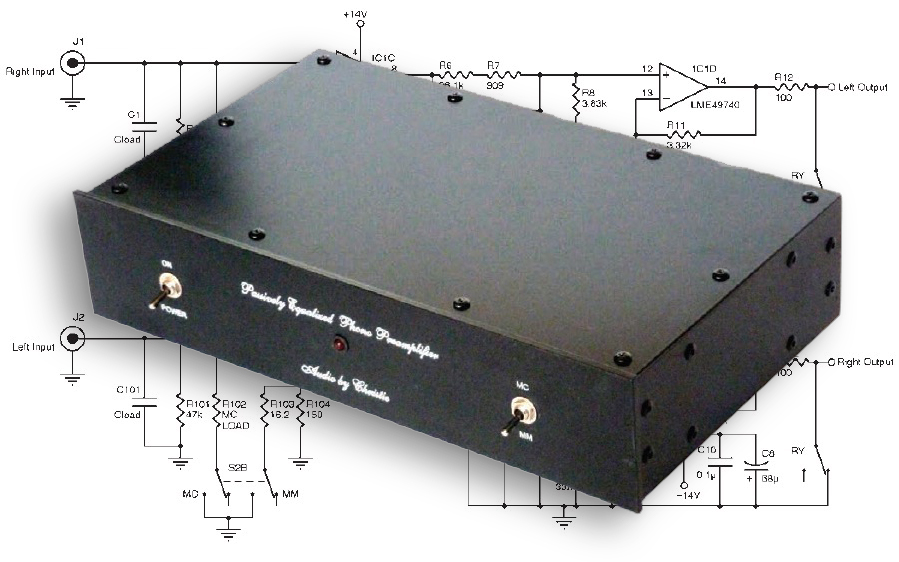 Texas Instruments (TI) has a series of high-performance op-amps specifically designed for high-fidelity applications. The datasheets include the schematic for a phono preamplifier, the LME49740, which looked like a good candidate. The LME49740 is a 14-pin integrated circuit (IC) containing four op-amps, which is just the right number for the preamplifier. I’ve had excellent experience with this series and decided to use it.

The first thing I did was design a power supply worthy of the job. I started with a toroidal transformer to minimize the stray magnetic field. Then I used a bridge rectifier with large capacitors to form the raw supply. I regulated the raw supply down to ±14 V. I used adjustable regulators (the LM317 and the LM337) because they are said to have less noise than
fixed regulators. The raw supply provides power to a relay driver circuit with about a 0.5s turn on delay and almost instantaneous off delay.

The circuit for the preamplifier itself is essentially the TI-supplied circuit. I’ve made a few minor changes to accommodate the moving coil cartridges, cartridge loading, and output muting. The topology is simple. There is a linear gain stage at the input, followed by a passive RIAA (Recording Industry Association of America) filter, followed by a linear output gain stage. The passive filter consists of resistors in series and capacitors in parallel to closely achieve the proper component values. I used the values specified in the datasheet with excellent results. (The TI LME49740 datasheet is available here) It includes the phono preamplifier schematic with specified values. Other combinations are valid.

This article was originally published in audioXpress, July 2016.
related items